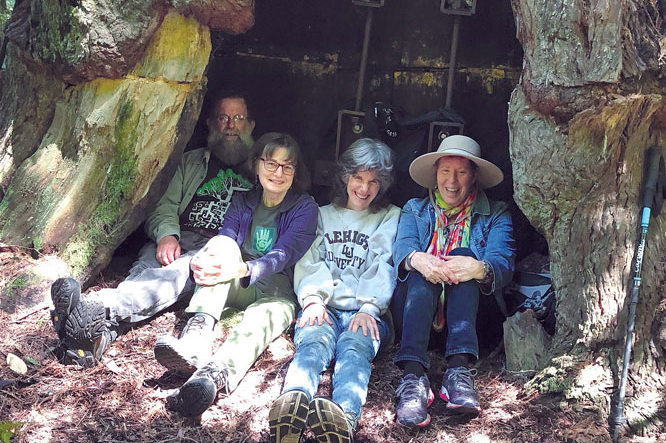 Stuart Moskowitz at base of Luna in 2019 with, from left to right —Sanctuary Forest Board Members Janice Parakilas, and Women’s Forest Sanctuary members Susan Werner and Robin Reiss. Photo by Susan Parsons

from Trees Foundation’s Branching Out, Winter 1998/99

By Stuart Moskowitz, Sanctuary Forest Board of Directors

In December 1999, Julia Butterfly Hill entered into an agreement with Pacific Lumber Company creating a conservation easement protecting Luna forever. It ended Julia’s two-year treesit, where Luna served as her microphone for speaking to the world about sustainable forestry. In 2008, the easement transferred to the Humboldt Redwood Company.

Sanctuary Forest, a land trust, monitors this easement. My name is Stuart. I serve on Sanctuary Forest’s board of directors. Twenty-two years ago, I volunteered to take the lead monitoring this easement. This Luna story took a dark turn in November 2000 when a vandal chainsawed halfway through her trunk. Experts predicted that Luna would die from the top down within 2 to 5 years. While some dieback did occur at the very top, Luna has thrived and grown.

Luna continues to serve as a microphone. Photographers, authors, researchers, and filmmakers, among others, still hear her call from around the world. Four detailed updates can be found at the bottom of this webpage: https://sanctuaryforest.org/programs/land-conservation/luna/. The last one was written in 2015. This short fifth update focuses on the people who, since 2015, have kept Luna’s story alive through books, movies, theatre, lectures, and more.

The German weekly, Die Zeit, in 2016 sent science editor Fritz Habekuss to Luna. His story, Die Frau Im Baum (The Woman in the Tree) was published the following year. www.zeit.de/2018/01/julia-hill-mammutbaum-baumbesetzung-abholzung-kalifornien

In October 2016, Camera Lucida Productions sent a film crew from France. They filmed Luna for five days for a documentary titled Survivors, the story of two ancient trees and their caretakers. Interestingly, Luna was paired with a 500-year-old Japanese potted Bonsai. The film aired on European Public Television but has not been released in the United States. A 3-minute trailer, with beautiful drone footage, can be seen at https://sanctuaryforest.org/programs/land-conservation/luna/

In 2017, National Geographic featured Luna in a story not about big or tall or old trees, but about wise trees. It’s written and photographed by Len Jenshel and Diane Cook. A book called Wise Trees, published by Abrams Press, soon followed. https://news.nationalgeographic.com/2016/04/remarkable-trees-earth-day-pictures.

Lauraine LeBlanc told her story For The Love Of Luna in the Mad River Union in November 2017. https://madriverunion.com/for-the-love-of-luna/

2017 also welcomed the children’s book Julia Räddar Skogen (Julia Saves the Forest), written by the Swedish author Niklos Hill. Telling the story to children keeps it alive for future leaders! This is the second children’s book; Jenny Sue Kostecki-Shaw wrote Luna And Me in 2015.

Children telling the story strengthen the movement even more. Zoe Macknicki, age 12, accompanied me to Luna in November 2017. Zoe was researching Luna for her History Day project, which won prizes at local and state 2018 competitions; she was awarded “Best Junior Exhibit on California History.”

Nobody tells the story better than Julia herself. In November 2017, she did two interviews on KHSU radio with Geraldine Goldberg as part of a series called “Through the Eyes of Women.” Both interviews can be heard at http://khsu.org/post/julia-butterfly-20-years-later-part-ii

In 2020, George Ella Lyon wrote Voices Of Justice: Poems About People Working For A Better World. Beautifully illustrated by Jennifer Potter, it introduces children to some of the biggest voices advocating making the world a better place. Julia Butterfly Hill’s message appears alongside Nelson Mandela, Jane Goodall, Greta Thunberg, and others. Putting Julia in the company of these immensely respected activists elevates all their messages and makes Luna’s microphone even stronger.

A graphic novel version is currently in the works at https://risingeartheducation.org/graphic-novels-1

I suppose, as caretaker of the easement, I have a story, too. Besides writing these “Luna Updates” these past five years, I’ve given many presentations. I’ve presented in classrooms, museums, libraries, and the Eureka Zoo. I’ve told the story for the Global Organization of Tree Climbers, and I talked remotely to more than 130 treetop camps in 25 countries around the world via Zoom and Instagram for their 2020 Big Canopy Campout. The link to my PowerPoint presentation is at https://sanctuaryforest.org/big-canopy-campout-2020-interview-with-stuart-moskowitz/.

The story continues. The cables and brackets supporting the tree have been weathering for 21 years; maintenance will be needed. Sanctuary Forest and Humboldt Redwood Company anticipate working together on a strategy that’s best for Luna. These cooperative efforts bring environmentalists and loggers together, creating space for other topics, too. Working cooperatively helps bridge our differences.

In closing , the 2020 photo of the chainsaw cut, below, shows Luna growing over the cut. Luna is healing herself!