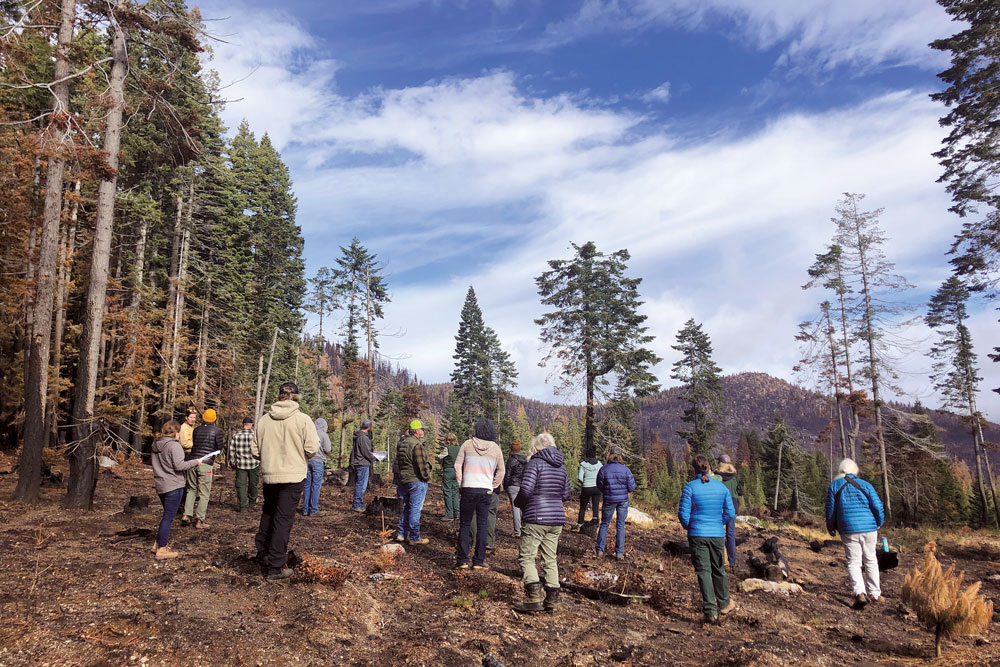 A community field tour in the Antelope Fire area with the Forest Service, in which the public expressed concerns about proposed post-fire salvage logging. Photo by George Sexton

By George Sexton, Director for KSWild

Following the August 2021 Antelope Fire on the McCloud Ranger District of the Shasta-Trinity National Forest, the Forest Service did what it often does after a wildfire—namely, the agency proposed an expansive “salvage” logging timber sale.

The Antelope timber sale is primarily located along Trout Creek, one of the only streams in the world containing the endemic McCloud Red Band Trout. The lower-elevation portions of the Antelope salvage logging planning area consist of a checkerboard land ownership pattern in which large swaths of interspersed industrial timberlands are being clearcut like there’s no tomorrow.

The extensive network of logging roads connecting the industrial timberlands and the public Forest Service lands are an aquatic nightmare. Much of the timber haul route parallels Trout Creek with numerous road-stream crossings, low-water fords, and road ditch-line connections to streams and tributaries. Logging road-related sediment and turbidity pollution to Trout Creek have been a significant problem both before and after the Antelope Fire.

During the Forest Service timber sale planning process for the Antelope salvage timber sale, logging trucks from the post-fire private lands clearcutting were using the logging road haul routes without any apparent rocking or sediment catchment devices, and the sediment production to Trout Creek was significant. It was literally a post-fire logging free-for-all.

During several public field trips and a public “scoping” commenting process, conservation advocates requested that instead of clearcutting post-fire Late Successional Reserve forest stands in the backcountry, the Forest Service utilize a more limited approach focused on roadside hazard tree removal in the wildland–urban interface zone and rehabilitation of the logging road system.

While it’s not glamorous, the public NEPA planning process for Federal lands management actually works sometimes to improve Forest Service projects. This is one of those instances. To their credit, project planners on the McCloud Ranger District heard the public concerns regarding their post-fire logging plans and dropped the controversial backcountry Late Successional Reserves salvage logging units.