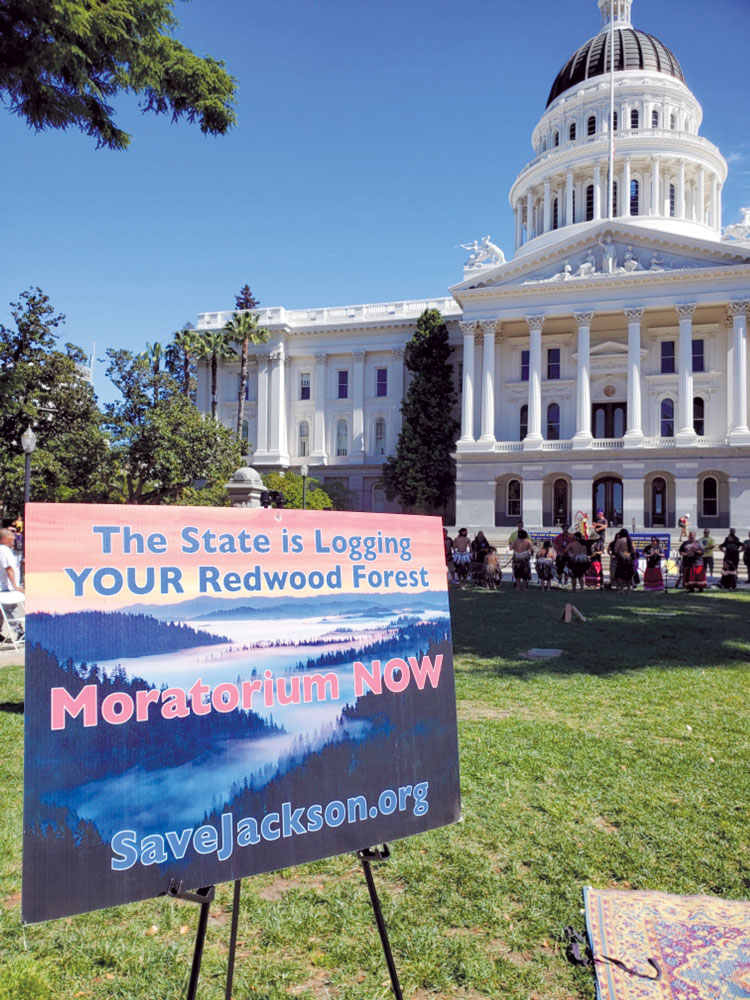 Jackson Demonstration State Forest (JDSF) is a nearly 50,000-acre mixed-use forest located in Pomo and Yuki ancestral territory and managed by CAL FIRE. After a century of clearcutting in Northern California, Jackson was created in 1949 to demonstrate sustainable logging. CAL FIRE has managed the forest as an industrial timberland, regularly harvesting large second-growth redwoods.

EPIC is working with a broad coalition in the Campaign to Save Jackson, which includes local and national organizations, community members, and the Coyote Valley Band of Pomo Indians, the original stewards of the forest. The Pomo have gathered acorns, fished for salmon, and collected food, basket-weaving materials, and medicinal plants from the coastal forest since time immemorial. The coalition is striving to change the way CAL FIRE manages JDSF using a multi-pronged approach.

In 2021, we launched new efforts to conserve the forest under Governor Newsom’s 30×30 plan, which calls for conservation of 30% of California’s land by 2030. JDSF is a great candidate because it houses biological resources and culturally significant sites for the Northern Pomo and Coast Yuki peoples. JDSF is already state-owned land, which means no acquisition is required to move almost 50,000 acres into the “conserved” column. JDSF is already beloved by local residents and tourists alike as a place for outdoor recreation. Furthermore, the dominant species in Jackson is coastal redwood trees, which sequester carbon quicker and for a longer period of time than almost any other species on Earth, while simultaneously providing habitat to the endangered northern spotted owl and marbled murrelet.

For the past several weeks, Michael Hunter, Chairman of the Coyote Valley Band of Pomo Indians, has been leading community tours through JDSF. These tours were an opportunity for community members to witness CAL FIRE’s poor management of the forest and to share their thoughts about what a better-managed forest would look like. During the tours, Indigenous people returned to a forest that they had been violently driven out of over 150 years ago and were able to pray, dance, and give offerings.

Vice Chairman Frankie Myers of the Yurok Tribe made a trip down to offer his thoughts about what the future of the forest should look like. He told a crowd of gathered supporters that in order to restore the forest, we must restore its original caretakers, the Pomo and Coast Yuki peoples, to the land.

On March 2nd, Senator McGuire announced that the JDSF management plan would be rewritten. Rewriting the old management plan, which permits logging of large redwoods, damage to Native American sacred sites, and other bad management practices, has been one of the coalition’s main demands. The new management plan must include full co-management with tribes, protection for large trees, and more engagement with the local community, and must account for the climate and biodiversity emergency that is upon us. In the meantime, a moratorium on timber operations must be secured so that CAL FIRE cannot damage the forest any further while a new management plan is developed.

Destructive logging occurring in JDSF is completely controlled by the State. If Newsom wanted, he could place a moratorium on logging operations to protect the forest. Chairman Hunter presented thousands of signatures he has collected calling for a moratorium at a rally in Ukiah earlier this month. The rally was attended by Native American dancers, environmental groups, and members of the public who support change in JDSF. Another rally at the Capitol in Sacramento on March 25th was attended by hundreds of people.

Together, we are all committed to changing the way CAL FIRE manages JDSF to focus on wildlife conservation, carbon sequestration, protecting cultural sites, and recreation, not industrial logging.