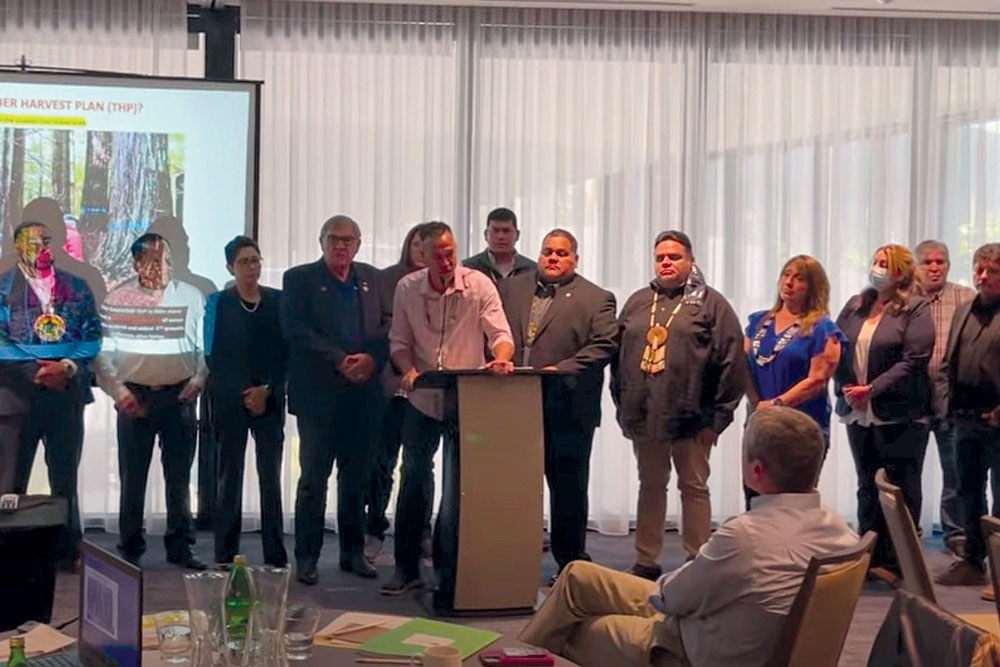 The following is a partial transcript of the Oct. 18, 2021, KZYX Public Affairs show hosted by Alicia Littletree Bales, edited for length.

Alicia Littletree Bales: Good morning, this is Alicia Bales. I’m live in the Ukiah studio with Michael Hunter [Chair of the Coyote Valley Band of Pomo Indians] …and we’re going to hear [his] amazing story from the front lines out of Jackson Demonstration State Forest [JDSF]…

Michael Hunter: Before I tell that story, I want to chronicle the journey that I’ve been on for the regard in JDSF. I believe it was in early April [2021] my mother Pricilla Hunter and Polly Girvin, my mother’s partner, they were asking me to go participate so I could see what is happening with CALFIRE and what they are doing to the JDSF.

I’m not much of an activist. I work on a lot of policy, legislative, but a lot of economic development for my Tribe. So I get out there and we meet a great group of people on the coast, about 40 of us. Chad Swimmer with Mendocino Trail Stewards… takes us to one side of the road—this is only about a mile in from Highway 101, not far away out in the middle of the woods—and it’s just total destruction. I’m like, “No way this can be. How can anyone allow this to happen? How does any agency not regulate this?” It’s so weird to me. And it was my aha moment. I just went, “Wow, there’s an actual agency, CALFIRE, supposed to watch over and manage our forest, and they let this happen.”

Between April and June I started to meet some really good people out there in the forest and they were showing me the trails. When I’m out in the redwoods, I can really gather my thoughts and put a plan of action together for almost anything I’m working on. It’s really amazing, how more creative you can be when you’re outside. I recommend that to everybody, they should really try to get outside and think about the next 10 steps they want to do.

So I’m doing that, meeting some really good direct action people. My idols—you’re one of them, Alicia. So I’m getting out there and I attend this fundraiser, and I was in Casper, and so I run into you there…

MH: Yes, that was beautiful. That’s my first time really being in a community where everybody literally loved each other. People were cool, having a great time, playing music on the stage. I was asked to introduce my mother, and my mother gives a really inspiring speech. I’m standing on the stage behind her, watching her, and then I’m watching the people react. And I really enjoyed that moment. And I said, I have to get more involved.

How do I do what we’re not already doing? My strength is political action. My strength is legislation and economic development. I’ve been flirting around with trying to do more public relations and get more people involved in my community, and I was just thinking, is this the one? You can’t get any more righteous than saving the forest where your People roamed, and where all our sacred sites are, for the most part.

So I start going down the political route. I decide to get Coyote Valley Band of Pomo Indians to write a letter; [and] the United Pomo Nations Council, which consists of 16 Pomo tribes…and the Central California Tribal Chairpersons Association to draft the same letter. And I said, “You know, I’m going to go live on Facebook. Add me as a friend [on Facebook] – Michael Hunter. I’ve been showing every step I do even before I do it, for the most part [on Facebook Live]. I said, I’m going to send these letters to Senator Maguire, Assemblyman Wood, and Congressman Huffman. But the most important one was…the California Natural Resources Agency, Secretary Crowfoot, and the tribal liaison is Geneva Thompson, who’s a good friend for Indian Country.

Now fast-forward a little bit. I decide, I’m going to set up a meeting with Secretary Crowfoot. This has got to be a good dude. He’s in charge of the California Natural Resources Agency. In my mind, he must be.. the man for this issue. So I get the California Tribal Chairperson Association [CTCA] to request Crowfoot to meet with us on September 23rd. I get the CTCA to also sign on and write a letter on behalf of the JDSF. We’re asking for a moratorium in these letters, we’ll just ask for a moratorium to stop what they’re doing until we can convene all parties and figure this out.

We go to our annual CTCA meeting, and Secretary Crowfoot is going to be there. I’ve already had one Tribal consultation process with Geneva Thompson, I showed her the PowerPoint, all the destruction and everything that’s happening. I let her know, Hey, I’m looking for you to have answers on Sept. 23rd. It’s not a speech moment. I’m saying this stuff because I want them to understand, I’m here for action, I’m not here for a conversation.

[Editor’s Note: a recording of this meeting is available on Michael’s YouTube channel, ‘Tribal Chairman Hunter’]

MH: [Secretary Crowfoot] gets up and starts talking about how they’re helping, [laugh] and there’s not one specific idea on how they’re helping at all. So I go up there and go to the slides [of JDSF] and I ask “Is this a healthy timber harvest plan, sir?” He doesn’t answer. I just keep showing different harvest plans where it’s all just dried up wood that’s just ready for a fire- acres and acres and acres. Now he starts to see the room a little bit better, and he’s starting to [see] that he’s not in a good situation.

I’m reading the room and I say, “Can I get the Tribal leaders to come up with me?” They all come up and stand behind me and I said, “Secretary Crowfoot, please, please come up and stand with the Tribes and tell the people that cutting 150 year old redwood trees is not fire prevention, and that it’s not climate action. Can you please come up?”

And he sat there. He didn’t know what to do and he froze. That’s when I realized he’s just a politician. He really had no answers. He gets long-winded and starts talking about carbon sequestration, but had no specifics on how it’s going to happen.

So after that, I was really bummed. I thought that was the opportunity. I worked hard to get there. We had all the Tribal leader support all in one document and presented him with it right there in person…He didn’t know what to do. He just froze. In that meeting, he said “To my knowledge, there is no logging happening in the JDSF. To my knowledge there is no cutting of redwoods happening in
the JDSF.”

So I said, what kind of Tribal leader am I if I don’t go out there and prove him wrong? I want the Tribal leaders to know that this man lied directly to your face, but the only way to do that is getting out there in those forests, and that’s where you started the [radio] show off.

So I’m up at 4am, so we get there at 6am, we hike up there and right out of the gate, the loggers come out. This is my first interaction. This is my first direct action moment too, to be honest, in that type of setting, in the middle of woods with dudes that don’t look like me, people who usually don’t like my kind, and they have big chainsaws. [laugh] It’s a little bit nerve-racking, and to be honest with you, I was scared, didn’t know it at the time, and you really don’t know until afterwards, when you realize how scared you are. You know. You’ve done direct action.

ALB: Yeah, it is scary, and you try to go in with an open heart and try to diffuse whatever sort of confrontation is going on, but it does take a lot of courage to do that.

MH: Right, and you try to figure out the angle, it’s like, what can you do? Are they going to cut that tree anyway? You’re hoping that your video is your protection, you video them just in case someone decided to run that chainsaw down your back. I’m trying to get as close as I can, and doing Facebook Live as well. And I get everybody in the video, it was a very stressful moment. And we stopped them. Wow, I had such an adrenalin rush. We actually stopped them. It worked!

We need to get more people involved in direct action, because that is where it makes a difference. Until people like me can come up with the legislative fix or political fix, like a moratorium. Until we get our state leaders aware of what’s going on in our forest, so they can grant a moratorium, so we can figure this out.

← The Map: A Mythic RecollectionEvolving Drought Resilience in McKee Creek →