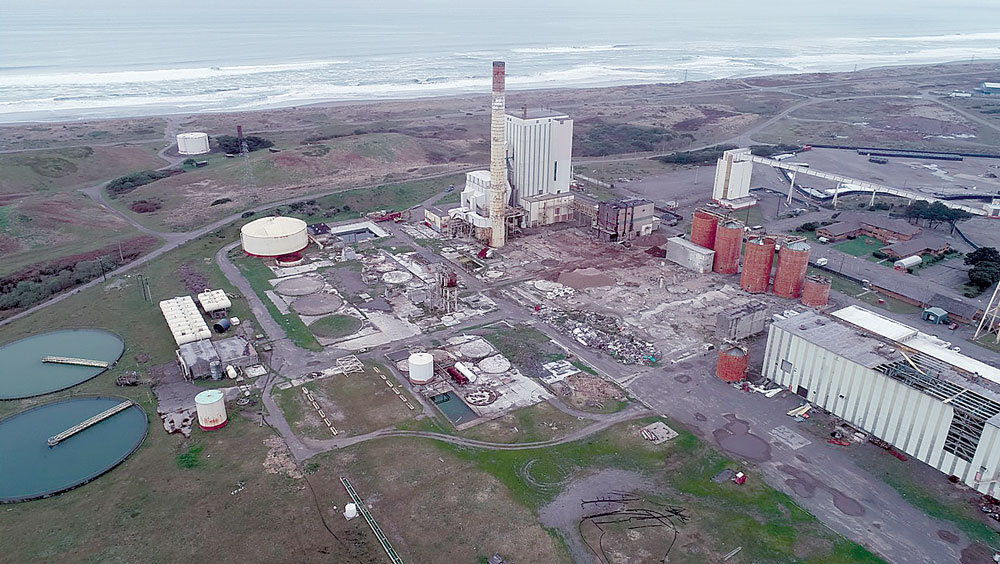 In 2020, Salmonid Restoration Federation was awarded a grant from the Rose Foundation to research and conduct outreach regarding the potential for aquaculture in Humboldt Bay. The bay is already home to an oyster-farming industry, and it was recently announced that Humboldt State University will be starting a seaweed farm in the bay. Humboldt Bay is amenable to aquaculture because there are existing areas permitted for aquaculture operations, and the bay is clean and relatively undeveloped, compared to other coastal areas of California. Even if the particular aquafarming project discussed below is not approved, this site has been identified as a high-potential location and will likely be re-developed some time in the near future.

The current focus of our research and outreach efforts regarding aquaculture in Humboldt is the proposed Nordic Aquafarms facility. Nordic Aquafarms (NAF) plans to build a land-based fish farm on the Samoa Peninsula at an old pulp mill site, which has an existing discharge pipe reaching 1.5 miles into the ocean to eliminate waste from the facility. In the NAF recirculating aquaculture system, adult fish are held in large tanks where they are able to swim, in order to mimic conditions similar to those of wild fish. The system takes in fresh water, recirculates it for 36 hours, and then releases it into the ocean via the existing outfall pipe. This fresh water would likely come from the Mad River, the main source of water for the Humboldt Bay Municipal Water District.

In several respects, SRF supports this concept because it is an improvement on the problematic net pen version of salmon farming that until recently was extremely popular throughout the Pacific Northwest. We commend NAF for its technological solution to a very real problem—people want to eat more salmon even as the wild stocks continue to decline. NAF will do a great service to the Humboldt Bay Area by cleaning up the old pulp mill site and providing industrial jobs in a place that has faced economic hardship. Additionally, by locating their facility centrally on the West Coast, NAF hopes to reduce the carbon emissions caused by the global transportation of seafood.

However, we also see many potential negative issues with the proposed facility. The existing outfall pipe extends only 1.5 miles into the ocean, which seems far but still has the potential to impact water quality for plants and animals in the ocean and for humans who use the peninsula’s beaches. An ongoing criticism of fish farming generally is that it is energy-intensive and has a significant environmental footprint, largely due to the carbon emissions from the plant itself and the amount of food required to grow farmed fish, especially salmon. Although the facility is referred to as a “recirculating system,” it will require a constant intake of fresh water and will output salt-laden solid waste that needs to be somehow taken offsite.

There are also several ways this facility could negatively impact wild salmonids locally. coho salmon, listed as a threatened species in this area, use the estuaries and streams surrounding Humboldt Bay as rearing habitat, and pollution or viruses that enter the water on the ocean side of the peninsula could be swept into the bay. Adult salmon will have to pass the outfall pipe during their migration between the ocean and freshwater streams. The effluent from the facility contains nitrogen and carbon, nutrient pollution that could cause harmful algae blooms. There is the potential for chemicals from treating things like fish disease as well as viruses themselves to spread from the facility to wild fish, even if it is not possible for the farmed fish to escape. In an area susceptible to earthquakes and tsunamis, it will be important to ensure that live fish cannot ever leave the facility, especially during a large seismic event. Nordic has recently indicated that the farmed fish will likely be a non-native species, a cause for concern if any of those fish escape.

Finally, Humboldt Bay contains California’s second largest estuary, home to the largest remaining eelgrass beds in the state. Kelp beds offshore also represent an “at-risk” habitat that could be negatively impacted by pollutants and chemicals. It will be important for the community to keep all the potential pros and cons of this facility in mind as Nordic’s permitting process enters the public comment period, starting in April 2021.

If you are interested in learning more about this project, NAF is holding weekly open meetings for the general public via Zoom on Mondays. They are presenting information on specific topics once a week on Wednesdays. For the most up-to-date schedule of online events and links to these meetings, you can visit their Facebook page at www.facebook.com/Nordichumboldt