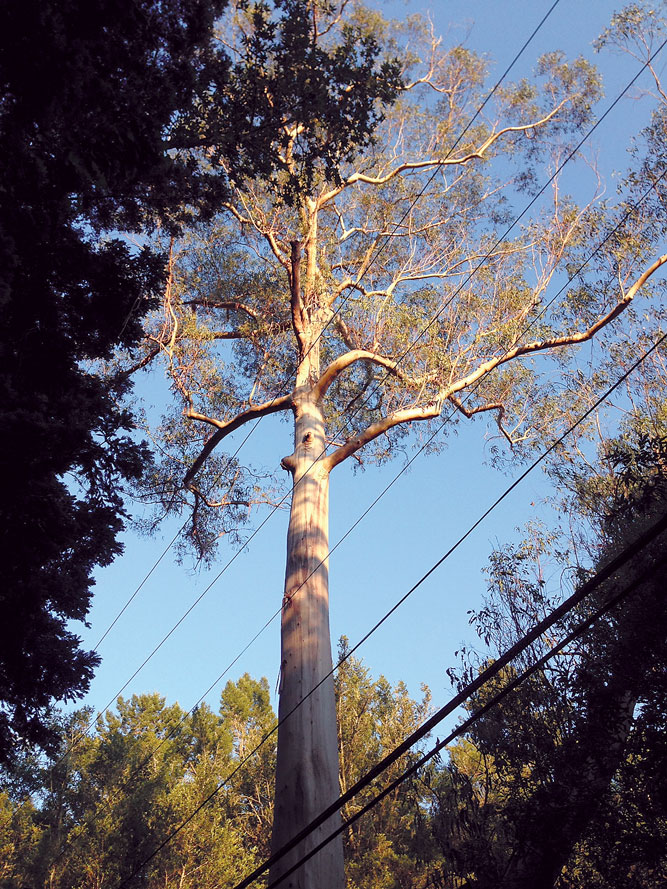 Mill Valley, just north of San Francisco in Marin County, stretches from beside Richardson Bay, an arm of San Francisco Bay, up through former oak grasslands, into a redwood forest on the eastern flanks of Mount Tamalpais. The famed Muir Woods is in the next watershed south. Jurisdictions of the Richardson Bay Watershed include the city of Mill Valley, unincorporated county land, and in the upper reaches: Marin Municipal Water District, County Open Space, and Golden Gate National Recreation Area. Settlers and more recent residents have planted many nonnative trees; eucalyptus trees by the hundreds were planted as wind breaks in the county subwatersheds of Tamalpais Valley and Homestead Valley. Within the city boundaries, second-growth redwoods are the dominant tree in the original forested area. Eucalyptuses are found here and there, not planted en masse within the city.

This article looks at blue gum eucalyptus on public land within the Mill Valley city boundary. Although the Maintenance Report from which information is drawn is aimed at public safety from the aspect of the risk of falling trees or limbs, other recent concerns have included fire danger in the city and a loss of the original habitat of threatened and endangered species such as the northern spotted owl, steelhead trout, and coho salmon, the latter now extirpated in the watershed.

In a 2017 city survey, 90 eucalyptus trees are identified and mapped in 16 map areas. Two of the map areas are right by the bay; three map areas are in former or current oak/bay/buckeye grasslands; and the remaining 11 are in redwood forest areas that remain predominantly redwood with houses built on winding streets. Thirty-plus years ago in 1988, when the first inventory was made on public land, 374 eucalyptus trees were found, of which 107 were recommended for removal. Between 1994 and 2017, 111 trees not on the removal list of the consultant were removed to make way for new construction or to repair damage to property. The remaining trees are large and probably have roots that go down into fissures in the bedrock to access water. The trees are well adapted to the current climate regime: local rainfall pattern of no rain from about mid April until mid October and then about 36 inches of rain during about 52 days of the winter. Fog rolls in over the hills from the Pacific year-round.

Arborists and perhaps the general public consider healthy eucalyptus trees scattered around the town as “massive, providing significant aesthetic values to the neighborhoods, as well as wildlife habitat, carbon sequestration and erosion control.” This quote is from the Mill Valley report “Maintenance Plan, Publicly Owned Eucalyptus Trees,” written by arborist Denice Britton in 2018. But fire fighters have a different view; they know that eucalyptus trees can be dangerous in a fire landscape due to both their high oil content and the litter found around the trees. Redwood canyons, on the other hand, were once part of a plan to act as a sink to slow the spread of fire. Many redwoods in Mill Valley show black scars from fires decades ago.

The dropped leaves and bark from eucalyptuses could easily catch fire and be swept up in wind to carry burning embers to ignite new fires. The substantial debris also can deter native shrubs and ground cover from sprouting under the trees, thus diminishing the native habitat. Needless to say, the eucalyptus species (native to Australia) did not develop in balance with the microbia, insects, birds, and other biota of the northern California area.

Carbon sequestration and erosion control are laudable characteristics of the trees, although their burning releases huge amounts of carbon into the air. The invasive spread of eucalyptus is thankfully not as aggressive as certain other non-natives such as brooms, English and Algerian ivy, pampas grass, hanging sedge (Carex pendula) , certain grasses, as well as acacia trees, and possibly pines, which are not native to Marin County except on the land of Point Reyes National Seashore. Unfortunately, removal of the eucalyptus trees is a very expensive proposition and arouses citizen outcry. Removal of a single tree can cost between $10,000 and $30,000.

To conclude, eucalyptus trees belong in their native lands on the other side of the globe or in arboretums. To get rid of all these trees in Mill Valley will require continued effort by the Department of Public Works as well as responsible action by private property owners. An effort will be needed to replace the wind protection the tall trees provide. And their fire danger can be decreased by keeping the ground and shrubs below the trees cleaned up.

Eucalyptus mitigation is one part of the Mill Valley StreamKeepers’ effort to protect and restore the watershed of Mill Valley.