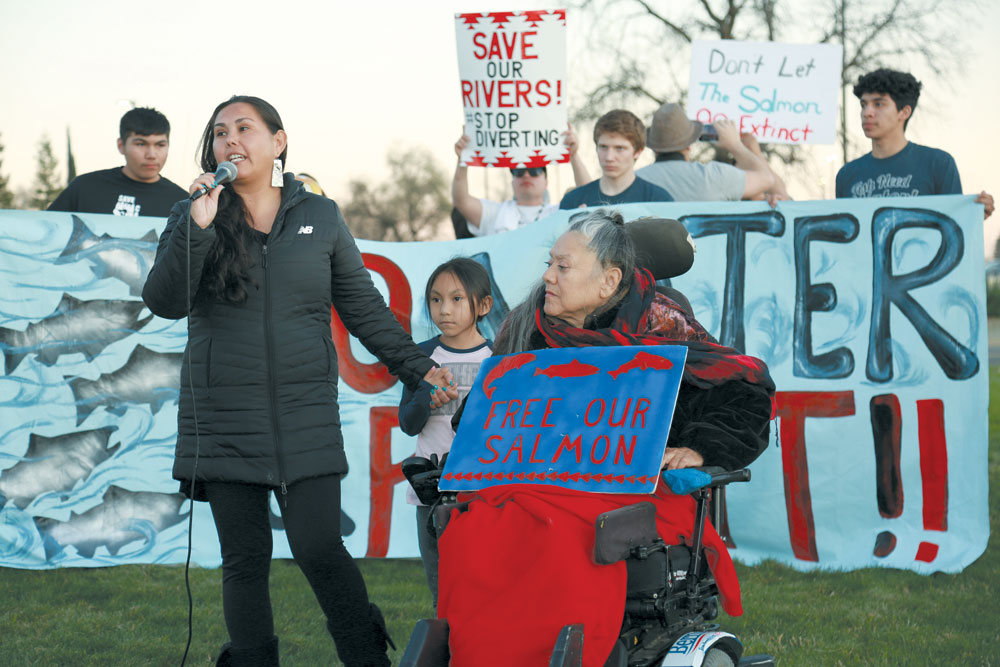 By Save California Salmon

Save California Salmon has teamed up with Humboldt State University’s Native American Studies Department (NAS) to offer a free Summer Speakers Series and Certificate Program on Advocacy & Water Protection in Native California. The weekly series started on June 4th and will continue on every Friday at noon through August 28th. The series culminates with the virtual Advocacy & Water Protection in Native California Symposium on September 25th.

The speaker series focuses on the state of California’s salmon, culture, and advocacy, as well as environmental justice for Tribal communities, sustainable food systems, direct action, and allyship with Indigenous movements. Along with being available on Zoom, the series will be broadcast live on Humboldt State’s NAS Facebook pages and posted on YouTube for use by educators. Registered attendees will have the option of obtaining a Certificate in Advocacy & Water Protection.

This web series is timely as currently many of California’s salmon species are facing extinction, and much of the state’s water supply is in danger of becoming unusable due to pollution, drought, and other issues. Organizers say the situation is getting worse due to droughts and proposals for new dams and diversions, which threaten California’s rivers and water. Rural communities are consequently suffering due to lack of a reliable food supply and fishing jobs.

Although much of California’s water supply comes from the rivers in Northern California’s Indian country, such as the Sacramento, Trinity, Klamath, and Bay Delta, often impacted people are left out of water and fisheries decisions, notes Regina Chichizola from Save California Salmon. She adds: “This is despite the health, cultural, and food security issues that Native communities are facing due to lack of salmon and clean water. Before the COVID-19 crisis we were supporting the efforts of Tribal communities and youth to force the state and federal governments and NGOs to include our communities in water decisions and conversations. Since COVID, north state communities have gone back to being left out of the decisions that impact our water.”

Chichizola went on to say many people do not know that Native communities, other people of color, and youth are organizing the movements to restore California’s rivers and decentralize its food and water supplies. “It is important for non-native people, environmental groups, and governments to educate themselves and make sure Native people are included in environmental decision making, along with education and funding conversations and decisions in California.”

The following is a portion of Regina Chichizola’s introduction to the second webinar in the series, titled “State of the Salmon and Water Wars on the Klamath”:

“We would like to begin the day by acknowledging that no matter where speakers are presenting from, we are on Native land. I am here in Yurok territory today, and Save California Salmon’s board and staff are based on Karuk, Yurok, Winnemem Wintu, Pomo, Hoopa Valley, Tolowa, Shasta, Wiyot, Maidu Ohlone, and Miwok territories. We also would like to voice support for all the people around the world that are fighting to dismantle systematic racism and for police accountability. We are in solidarity with Black Lives and the dismantling of systematic racism. Systematic racism and colonialism impact almost every aspect of people’s lives including environmental, water, health, and food policies. This is true even here in California where over a million people do not have access to clean water and many Native people do not have access to traditional foods, are unrecognized, and no longer have a land base. Locally, where I live on the Klamath River, many people, including people that could be presenters for this series, do not have access to technology or power and therefore cannot engage in online learning and decision making during the COVID-19 crisis. Last, we wish to acknowledge support for the removal of racist statues throughout Sacramento and the Bay Area this week.”

Join the conversation online to learn more. Visit californiasalmon.org and go to the Educational and Youth page to access past recordings and handouts. To register for the Zoom meetings or the certificate program, go to https://tinyurl.com/y9syml2d or email [email protected]. You can also watch the webinars at noon on Fridays on Facebook LIVE: Facebook.com/hsunasp