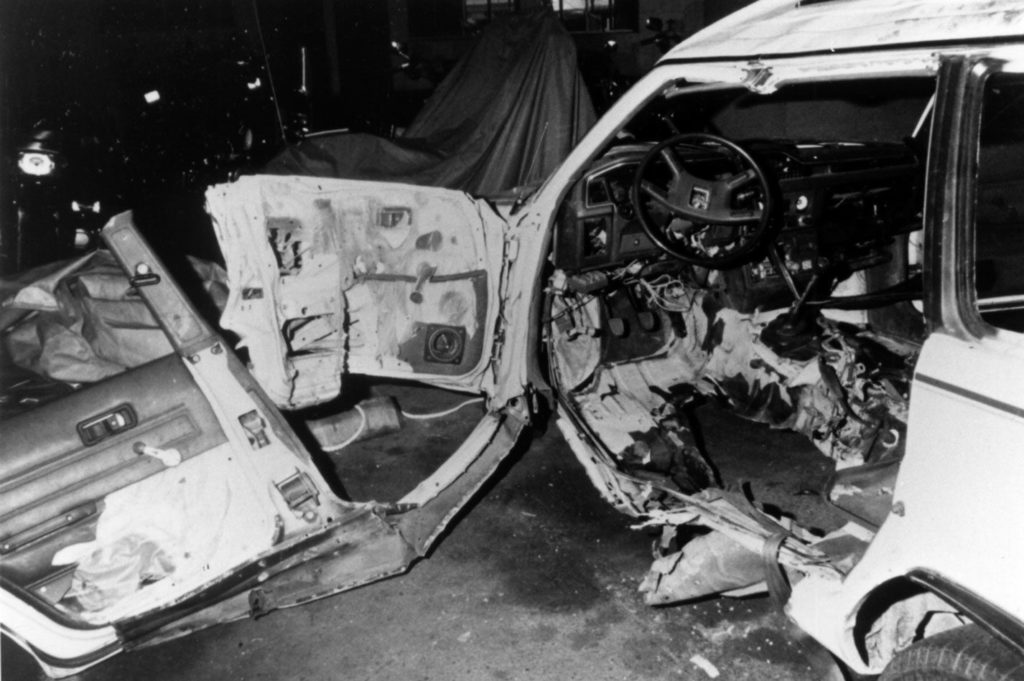 On May 24, 1990, a pipe bomb planted in the car of Earth First! activist Judi Bari exploded, sending her and fellow activist Darryl Cherney to Highland Hospital in Oakland—Judi with life-threatening injuries. Despite the location of the bomb—hidden under her driver’s seat—the FBI proceeded to blame Judi and Darryl for the bombing. They were ultimately vindicated in a history legal victory against the FBI and Oakland Police in 2002.

An exhibit will mark this 30th anniversary at the Mendocino County Museum in Willits once it reopens. It was originally scheduled for May 2 – June 5, 2020, but the museum was temporarily closed due to the Covid-19 Shelter in Place policy. The museum plans to reschedule the exhibit as soon as they know their reopening date. UPDATE: The exhibit is now rescheduled for May of 2021.

The FBI’s allegations of the two activists’ and Earth First!’s affiliation with violence, the creation of non-existent “evidence,” and the location of the bomb (police told media at the time the bomb was in the back seat, even while their own photos revealed its true location hidden under the driver’s seat) were later found to be fabricated or misrepresented when Darryl Cherney and Judi’s estate won a civil rights lawsuit filed against the FBI and Oakland Police in 2002. In 2005, the City of Oakland, by decree declared May 24 to be “Judi Bari Day.” Judi died in 1997 of breast cancer.

The bomb attack took place on the eve of Redwood Summer, planned as a summer-long effort to stop or slow down liquidation logging in coastal Northern California by the multinational timber companies operating at the time. The mass organizing sought to bring people to the North Coast in the midst of the Headwaters Forest Campaign opposing Maxxam–Pacific Lumber’s rapacious cutting of old-growth redwood forest; the campaign also challenged Louisiana-Pacific and Georgia-Pacific’s liquidation logging. Many believe the attack was meant to stop the campaign. But people came—thousands, from all across the country—and carried out forest defense on a scale previously never seen.

Judi and Darryl’s legal victory against the FBI is an important and unprecedented mile marker to remember, as is the bombing itself. We commemorate it 30 years later because it is necessary that we never forget, and that we remember to never give up and to maintain a bold resistance to strong-arm tactics, as well as to assaults on Mother Earth. But what Judi Bari brought to the forest-protection movement and to Earth First! goes far beyond the challenge to the FBI. She brought lessons from her background as a labor organizer, and her analysis that helped evolve radical thinking, philosophy, and strategy. Her booklet “Revolutionary Ecology,” where she discusses biocentrism in the context of radical social change thinking (e.g., Biocentrism Contradicts Capitalism, Biocentrism Contradicts Communism, and Biocentrism Contradicts Patriarchy), can be found at the link www.judibari.org/revolutionary-ecology.html.

The world around us changes, sometimes at breakneck speed. The context of movement building is always in flux and demands that we diligently evolve our thinking and strategic organizing. At the same time, it is valuable (and smart) to weave in institutional memory and not lose the wisdom embodied in the revolutionary thinking of our compañeras who are no longer around. Viva Judi!

While the events that Bay Area Coalition for Headwaters had planned to commemorate this occasion are canceled due to Covid-19, we encourage you to mark the 30th anniversary of the bombing by watching the feature-length film “Who Bombed Judi Bari?,” made by Darryl Cherney and Mary Liz Thomson. You can view the full documentary on You Tube. The dvd is also available for purchase at whobombedjudibari.com and includes subtitles in Spanish, Russian, Japanese, and German.

Mendocino County museum is temporarily closed due to the Covid-19 Shelter in Place policy.

This program is now rescheduled for May of 2021

← PODs: A Solution to Fire in the Time of Climate ChangeEnvironmental Justice in Native California: Free Summer Webinar Series →