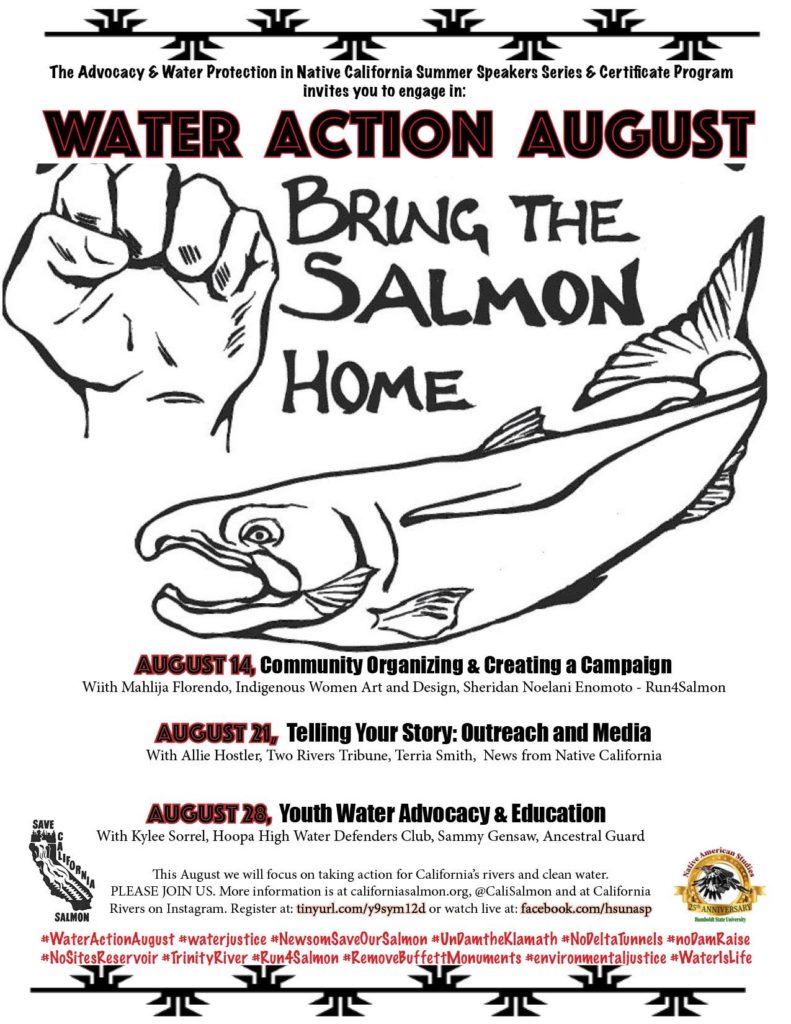 The speaker series focuses on issues such as the state of California’s salmon, culture, advocacy & environmental justice for Tribal communities, sustainable food systems, and direct action & allyship with Indigenous movements. Along with being available on Zoom, the series will be broadcast live on Humboldt State’s NAS Facebook pages and posted on Youtube for use by educators. Registered attendees will have the option of obtaining a Certificate in Advocacy & Water Protection.

Dr. Cutcha Risling Baldy explained that this program is aimed at people interested in making a difference through education and direct action.  “We are facing urgent environmental justice issues, we are navigating a pandemic, and we are seeing the importance of direct action and social movements  in real time all over the news. This series brings together voices, resources, and stories to help build new visions of the future and inspire people to protect our waters, salmon, and communities.”

This web series is timely as currently many of California’s salmon species are facing extinction, and much of the state’s water supply is in danger of becoming unusable due to pollution, drought, and other issues. Organizers say the situation is getting worse due to droughts and proposals for new dams and diversions which threaten California’s rivers and water. Rural communities are consequently suffering due to lack of a reliable food supply and fishing jobs.

“Although much of our water supply comes from the rivers in Northern California’s Indian country, such as the Sacramento, Trinity, Klamath and Bay Delta, often impacted people are left out of water and fisheries decisions.” said Regina Chichizola from Save California Salmon. “This is despite the health, cultural and food security issues that Native communities are facing due to lack of salmon and clean water. Before the COVID-19 crisis we were supporting the efforts of Tribal communities and youth to force the state and federal governments and NGOs to include our communities in water decisions and conversations. Since COVID North state communities have gone back to being left out of the decisions that impact our water.”

Chichizola went on to say many people do not know that Native communities, other people of color, and youth are organizing the movements to restore California’s rivers and decentralize its food and water supplies. “It is important for non-native people, environmental groups, and governments to educate themselves and make sure native people are included in environmental decision making, along with education and funding conversations and decisions in California.”

Humboldt State University’s Native American Studies department and Save California Salmon encourage anyone that is interested in water, food, education, and/or cultural and racial justice issues in California to attend this web series.

The link to register is:https://docs.google.com/forms/d/e/1FAIpQLSfwuld_AGcrPuzzo8UvP3s_UVbHXNdZX1fjaiLJ-VY15A-jOg/viewform

More information can be found at: https://www.californiasalmon.org/educational-and-youth-resources one Save California Salmon and Humboldt State’s NAS department’s facebook and Instagram pages.

Schedule for the web series

June: The State of California Salmon

6/12: State of the Salmon and Water Wars on the Klamath River

6/19: From the Trump Water Plan to the Shasta Dam Raise: The Fight for Sacramento River/Bay Delta Salmon

7/17: Cultural Revitalization on the Water: Canoe Traditions in the Pacific Northwest