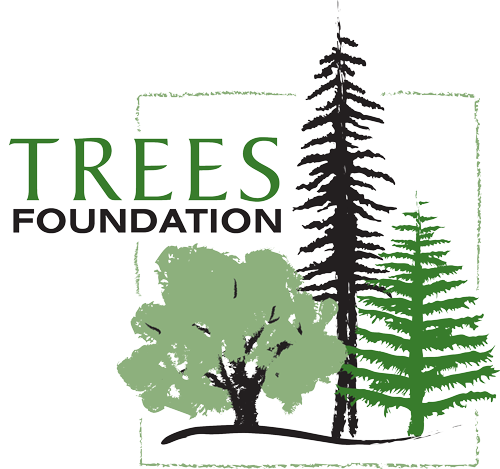 Fall of 2011 By Leib Ostrow
I’ve been invited to write a piece about the origins of the Trees Foundation in recognition of its twenty years of service. The idea of trying to write an article for a publication I so admire, that is filled with writings expressing the passion, wisdom, and concern of forest activists, foresters, and biologists, many of whom are my heroes, is a bit intimidating.

Fortunately, my window faces a beautiful hillside of redwoods, Douglas-firs, madrones, tan oaks and a few scattered chinquapins, and all the life and beauty that comes along with this kind of a mixed species forest. I’ve been admiring this hillside from the time I purchased adjoining land, over 35 years ago, watching it heal from the extreme logging that was done decades before I moved here and hoping that it would never happen again. I have always drawn strength from this forest.

Having fled here from as industrial a place as you can find, Detroit, Michigan, I had seen some of the worst of what humans could do to our mother earth and was searching for another place, another way. Through some mysterious workings of the universe, I found myself here in 1976 at the age of 25. I fell deeply and madly in love with the area and scraped together all I had for a down payment on 120 acres of cutover land overlooking Redway.

The term Mateel (combination of the two rivers flowing through, the Eel and the Mattole) was being coined, and our watersheds here in southern Humboldt County were filling up with many like minded “back to the landers,” many of us having very little knowledge of the workings of this magical coastal rainforest. But we saw the remnants of some of the most majestic forests that ever existed, we knew they were sacred and that they had been very badly abused and were continuing to be treated as a commodity instead of one of nature’s miracles.

It was hard to know where to start, how to help. We started learning about stewardship, about our own pieces of land and bringing them back to health, but it wasn’t enough. We continued to see the wanton destruction of the remaining 2% of the old-growth forests, the degradation of our streams and rivers, and the struggling wildlife that depended on these things.

Finally, Richard Gienger, one of the most passionate forest lovers of our tribe, called a meeting of desperation. One of the most precious remaining coastal ecosystems was under siege. In the old Needle Rock house in what is now know as the Sinkyone Wilderness, we mapped out a “war” strategy to save the surrounding forests. We came with our children, our anger, and our passion and we climbed trees, we confronted loggers, we made lots of noise and in the end we prevailed. Thousands of acres were protected. It was an amazing victory and I believe it inspired us all to realize we could make a difference and it strengthened our resolve to move forward.

Flash forward approximately eight years to 1991… many of my peers have taken their skills and ideas and started groups coming from many different angles and strategies but all aimed at restoring and preserving our ecosystem here in the Mateel. EPIC specializes in litigation and recourse through the court system, Sanctuary Forest is focused on buying lands for protection, EarthFirst! is known for direct action and civil disobedience, while Institute For Sustainable Forestry develops and teaches good forest practices. They all have their place in our “David vs. Goliath” struggle against the strong arm of special interest logging concerns. It’s inspiring that our tiny community has sprouted so many diverse and powerful environmental organizations.

Linda Dillon (my partner at the time) and I have taken a different path. We have created a company specializing in music for families. We have grown it and have now sold half of it to Warner Brothers Music. Upon signing our contract, we present Warner Bros. with a large banner with a picture of Tweety Bird, Bugs Bunny, and children hugging a tree and protecting it from the logger’s axe. It says, “We have not inherited the planet from our parents, we are protecting it for our children; Music for LIttle People in partnership with Warner Bros. Records.” One of our first catalog covers has a picture of children parading with a spotted owl flying above them. Our activism moves through our work.

As is the way of many in this community, we want to “tithe” some of the money we have received and give it back to the local environmental community. The problem is we have so many friends involved in so many different groups, we can’t figure out how to disperse it. And then we start realizing that many others who want to support the good work are probably in the same position. Also, many of the groups are all having to “reinvent the wheel”, needing to incorporate, get their 501c3 non-profit status, learn desk top publishing skills, GPS skills, bookkeeping skills, etc…. So we decide a kind of “umbrella” non-profit is needed to help support all the groups that exist, assist with fundraising, communication, and create an infrastructure that can be used for the various needs of the groups. We enlist the special talents of forest activist Bob Martel and organize a meeting of many of our activist friends to help in the creation. These were the roots of the Trees Foundation.

And as for the beautiful forest view out my window; when I came here, over six hundred acres of it were owned by Maxxam/Pacific Lumber company. Even though there had already been slides along the Eel River from questionable logging done there in the past and it was well known to be very unstable ground, around a decade ago they applied for a major timber harvest plan and the hillside would have been decimated. Through the great work of the folks on the Stable Slopes Forever group (including Richard Gienger) with assistance from Trees Foundation, we were granted a temporary restraining order from the horrendous logging and eventually the land was acquired by the state to become state park land. What comes around goes around……Brings a big smile to my face just to think about it.

Leib Ostrow is a founding member and current Board Treasurer of Trees Foundation.