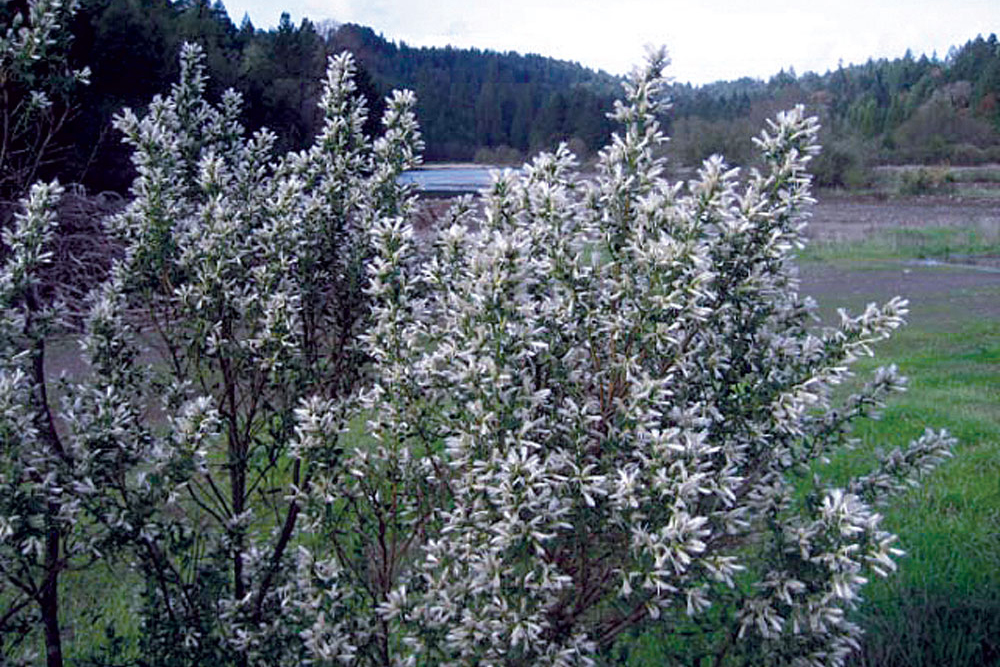 Coyote brush is an evergreen shrub that blooms in late fall and early winter, a time of year when there are few sources of nectar for small butterflies, predatory wasps, and flies. This makes coyote brush a valuable plant, ecologically speaking, as it supports thousands of insects that in turn support birds, other insects, small mammals, and on up the food chain.

Coyote brush plants are either male or female, a condition called dioecous. Male plants have only male flowers, which are yellow and not as showy as female flowers but smell sweetly floral. Female plants are covered in fluffy, showy white flowers that bear the seeds of the species. The fluff, called pappus, is similar to that of the dandelion and helps disperse the seeds in the wind. Both male and female flowers are in heads that have bracts (called phyllaries) at their base and look somewhat like miniature artichoke leaves. Like artichokes, coyote brush is in the aster family, Asteraceae, along with dandelion, thistle, daisy, sunflower, calendula, marigold, and many other genera.

The leaves of coyote brush have a somewhat sage-like smell due to the chemical compounds they contain. The aroma, enhanced by warm weather, is pleasing to some, unpleasant to others. Early Californians used coyote brush topically to treat poison oak and other skin problems, and swelling. It was also used for stomach problems and as a general remedy by those with knowledge and experience, as the active compounds can be toxic if taken internally.

Coyote brush is a pioneer plant, being one of the first to grow after fire, clearcut, or other disturbance. As a pioneer, it sometimes serves as a “nurse” plant—providing shade and protection to give a head start to seedlings of other shrubs and trees. Once the other shrubs and trees are established, coyote brush becomes shaded out. This succession is sometimes but not always desirable, especially as it can encroach on and displace grassland habitats. In the absence of periodic fire on the landscape to reset succession, coyote brush can be considered invasive.

Coyote brush grows from right along the coast, where it is sometimes a dwarf form, to the Sierra Nevada foothills, and from Oregon into Northern Mexico. It grows in many habitats—coastal, chaparral, prairie, and woodland—but it does not do well in the shade of the forest. Other common names are coyote bush and bush baccharis.

Cheryl Lisin is a native plant enthusiast, landscape designer, and President of Friends of the Lost Coast, whose mission is to inspire passion for nature in the Lost Coast region. She is currently working on a native plant garden and nursery at the King Range BLM office for the education and enjoyment of all. You can contact her at [email protected].