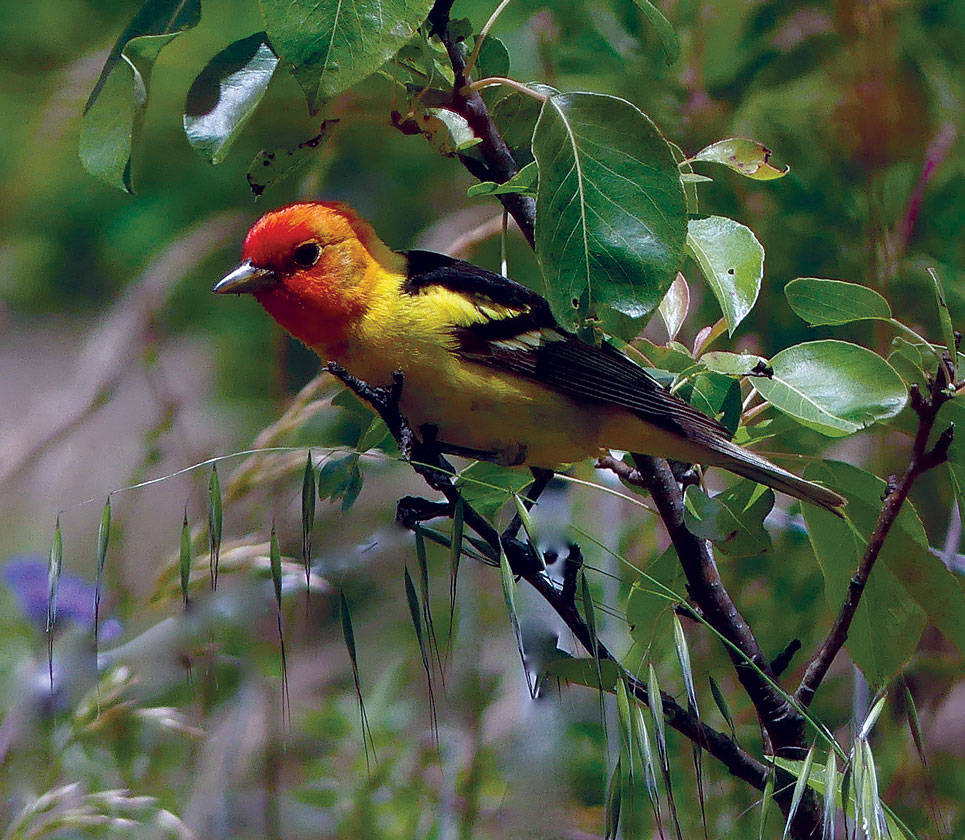 As the days become longer and the storms of winter pass, each year brings the promise of an ancient ritual that has taken place on the North Coast for millennia—spring migration. Oak woodlands, forests, and meadows that were virtually silent during winter months come alive with the songs and antics of some of our most colorful and vibrant bird species: Western Tanagers, Black-headed Grosbeaks, Lazuli Buntings, Vireos, Warblers, Hummingbirds, and Swallows. Some of these birds who just weeks before may have been foraging in jungle canopies alongside Howler Monkeys and Toucans now find themselves in a temperate world—among Gray Squirrels and Steller’s Jays.

Why Leave the Tropics?

Why do these small birds leave the tropics in the first place, risking their lives on this long journey? Scientists theorize that the greatest draw to neotropical migrants is the brief yet spectacular abundance of insect activity during our spring and summer months. During this short period, the explosion of insect life provided by temperate ecosystems is virtually unparalleled, allowing migrant birds to coexist with our local resident species while capitalizing on the highly nutritious food. Research also suggests that breeding success may be higher here than in the tropics where parasites and predators are more prevalent.

Migration is inherently dangerous. Neotropical migrants must travel over mountains, deserts, forests, vast expanses of industrial monocultures, and urban sprawl during their northbound journey. Many species fly by night. Some birds such as the Cliff Swallow (Petrochelidon pyrrhonota) come from as far south as the Amazon Basin in Brazil, while most other migratory species winter in Mexico and Central America. During this journey they use a complex array of strategies to navigate. Over their lifetime neotropical migrants learn the “sky map,” using the stars and sun as a travel guide. They also utilize topographical landmarks and wind directions, as well as subtle cues from the magnetic field of the Earth. The course they take is a learned one, shaped over evolutionary time and passed on by
their elders.

During the extended journey they may be threatened by storms, pesticides, house cats, collisions with windows, wind turbines and high-rise buildings, and, increasingly, the erratic weather caused by climate change. A freak frost or a spate of prolonged cold, wet weather can cause large numbers of migrants to perish.

Despite the risks, great numbers of them arrive each spring to serenade us amidst blooming wildflowers and lush green landscapes as they quickly get to work establishing territories, finding mates, and building nests.

Neotropical migrant songbirds comprise over half of the species that we hear singing during the spring and summer months on the North Coast. Their presence serves as an indicator of the health of our North Coast ecosystems, as well as the health and integrity of their tropical winter lands. Linking the landscapes of Humboldt to the far-off territories of Latin America, these well-traveled little songbirds are
a unique example of cultural and ecological interconnectedness.

Originally published in The Redwood Times