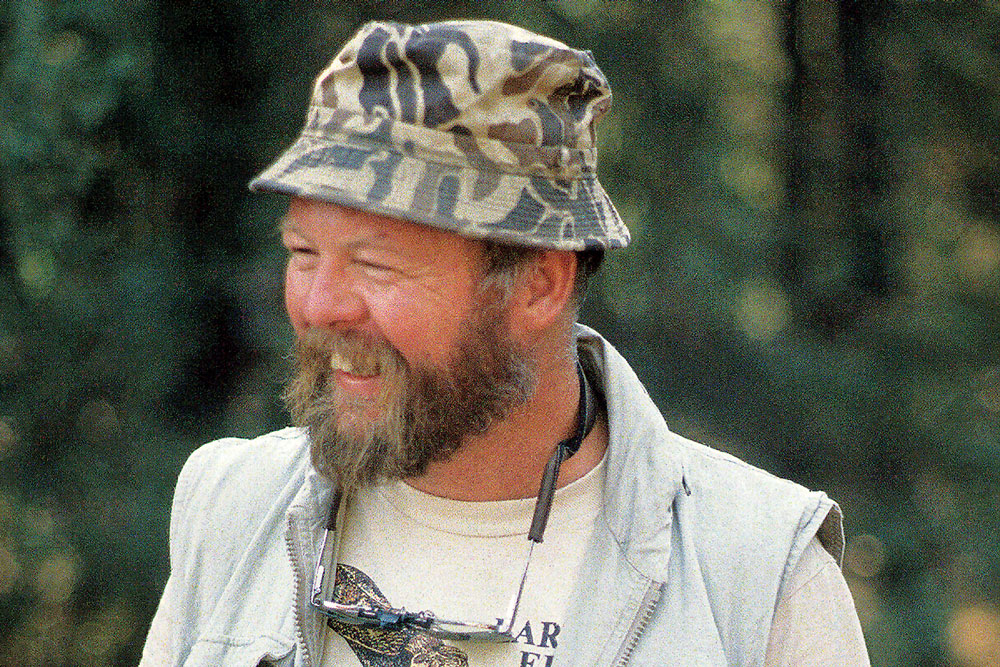 Dave Foreman during the 1989 Earth First! Round River Rendezvous in the Jemez Mountains of New Mexico.

Dave Foreman, one of Earth First!’s most visible spokespeople for nearly a decade from 1981 to 1990, passed away Sept. 19, 2022, just before he would have turned 75. While controversial, Dave, a self-proclaimed “Redneck for Wilderness,” was, for a time, perhaps the most brilliant thinker and wild orator the environmental movement had ever seen. He would tell stories, click up his heels on stage, and inspire thousands of people to put their bodies on the line for Mother Earth, including this writer. He pioneered and popularized the notion of biocentrism—that biology must be the center of our environmental concerns, as opposed to, say, political expediency.

Foreman’s most famous book is Ecodefense: A Field Guide to Monkeywrenching (1985), where the concept of sabotage in defense of life on this planet is presented as a valid tactic. He was a friend of Edward Abbey, who earlier wrote The Monkeywrench Gang (1975), a must-read. In fact, right there on the copyright page, Abbey predicts the formation of a group like Earth First! based on his book.

What made Earth First! different from all other environmental groups was and is a non-hierarchical structure that fostered leadership among the grassroots. Anyone could form an Earth First! chapter, be an Earth First! spokesperson, organize a blockade, tree-sit, or other protest without going through a board of directors. A large amount of trust made this possible. To this day, Earth First! considers itself more of a tribe than an organization. And what bonds that tribe together is the notion that we are wild!

In 1989, Foreman was targeted and arrested by the FBI for giving $100 to some folks who fell for an FBI sting operation to take down a power line in Arizona. That bust was the beginning of the end of his glory years, and in 1990 he resigned from Earth First! and his role as publisher of the Earth First! Journal. Foreman served no jail time but did plead guilty to avoid a messy trial.

Foreman went on to continue his environmental work with a number of organizations he founded. However, his legacy truly lies in the creation of Earth First! and the scores of biocentric-based environmental organizations in addition to Earth First! that now populate the country and the world. He redefined how we think about the Earth. The world is very much a better place for his being here. Dave Foreman provided vision, direct-action tactics, and a sense of the possible for those of us who remain true to putting Earth First!

Dave Foreman, who advocated for, wrote about, and fought for wild nature his entire adult life, died at (nearly) 75 on Sept. 19 in New Mexico, where he lived. Along with an enormous legacy of work and writings, he left a large impact on the modern environmental movement over the course of half a century.

After working for and becoming fed up with the Washington DC-based environmental groups, he and several people including Mike Roselle, Howie Wolke, Susan Morgan, and others, co-founded Earth First! in 1980. Deliberately radical, the direct-action group would change the face and tactics of environmental advocacy.

Foreman laid out his intentions in a 1981 Progressive article. In order to set a radical philosophical and tactical tone that would avoid the pitfalls of compromise, the co-founders crafted an agenda of throwing the blankets off the conservatism of the mainstream groups like the Sierra Club, the Wilderness Society et al., to bring “vigor, enthusiasm, and joy” to the tired environmental movement, to provide a “productive fringe,” and to inspire acts “straight from the pages of the book The Monkeywrench Gang and fight with uncompromising passion for Mother Earth.”

In 1985, Foreman published Ecodefense: A Field Guide to Monkeywrenching—a how-to manual that created an uproar and likely contributed to Dave being arrested by the FBI in 1989 when undercover agents set up a group of activists in the desert of Arizona with equipment, funding, and encouragement in an act of sabotage to a transmission tower that was part of a project bringing water to the golf courses of Phoenix. Dave was not part of the action, but he was charged with conspiracy nonetheless because of his notoriety and the Ecodefense book. This “Arizona 5” case was the first of what later became known as “The Green Scare.”

A controversial figure, Dave Foreman could be a crusty SOB and was not always enlightened socially in the way young activists of today would see it; instead he was a product of the 1970s and ’80s in a time of rapidly changing cultural mores and awareness. He held anti-immigration views and had famously public arguments with EF! and labor activist Judi Bari and social ecologist Murray Bookchin. He recognized that “Leftists often talk a little different language than me. That doesn’t mean we have to fight; it just means we start out emphasizing different things. I actually think we have a lot to learn from each other. I don’t necessarily consider myself a leftist. I don’t want to tar that movement with my association, for one thing. But I do have a great deal of sympathy for these movements and I continue to learn from my sometimes clumsy dance with the left.” [Editor’s Note: This quote is from Defending the Earth: A Debate, which transcribes a Nov. 1989 debate between Foreman and Murray Bookchin.]

He was also one of the most motivating orators and passionate people to speak out on behalf of other species. He did not coin the term “biocentrism,” but he turned countless people on to the concept by way of thinking outside the anthropocentric box. Dave had the style of a preacher, and his religion was biocentrism, his church the wild outdoors.

Dave and Earth First! parted ways into its second decade, and he went on to found the Wildlands Network in 1991 and the Wildlands Institute in 2003, with a mission of preserving and restoring wild nature by identifying and protecting wildlife habitat and wildlife corridors.

One of Dave’s closest friends said to me in 2021, after Dave’s partner Nancy died,
“In the end, I think we old EF!ers all share nearly all of the most important goals, even if our styles were different.” True, that.

Dave went on to further define his ideas and explain his perspective on the environmental movement’s history, the philosophy of biocentrism, and wilderness defense strategy in his autobiography, Confessions of an Eco-Warrior, published in 1991. He also published Rewilding North America: A Vision for Conservation in the 21st Century in 2004 and wrote or co-authored several other books.

Dave is recognized for popularizing the concept of Conservation Biology. He was incredibly well-versed on natural history and species extinction in the face of expanding human consumption, and always thought big, in terms of protection and restoration of wild areas and wild predators.

Dave’s proposal for a statement of principles for the nascent Earth First! in 1980 defined his ideas:

The first time I heard Dave Foreman speak was in Del Norte County (northwestern California) in 1982. I was with a HSU classmate heading into a backpacking trip on the South Fork Smith River, but seeing an interesting-looking group of people, I walked over and listened to Dave Foreman talk. He spoke of the Earth as a functioning being to be revered, thanked, and defended. Apparently, nearby Bald Mountain in Oregon was in need of direct action. So too was a proposed road linking Willow Creek and Crescent City. I learned about affinity groups and functioning as a group, connected and respecting each other. These people spoke my values and wanted to do something positive.

The Bald Mountain situation improved, so we young activists turned our attention to a South Fork Eel River Bureau of Land Management timber sale that needed a louder voice and direct action. The timber sale didn’t happen, and that forest in 2006 became the heart of the South Fork Eel Wilderness.

Now back to Dave Foreman. He was an inspiration for me for decades, a spokesperson, visionary, and teacher. Dave Foreman got us thinking about connectivity. Earth First!, California Wilderness Coalition, EPIC, the Sierra Club, so many groups stood up for Mother Earth in the years that followed Dave’s advocacy. Dave Foreman encouraged everyone to think BIG: big swaths of healthy ecosystem connecting bigger chunks of functioning forest. Connectivity was a new concept for me back then. Earth First! was the motto that motivated me to enjoy the big outdoors, joining positive people who were actually doing something in defense of Mother Earth. He is missed.

See other thoughts about Dave at https://rewilding.org/dave-foreman-obit/