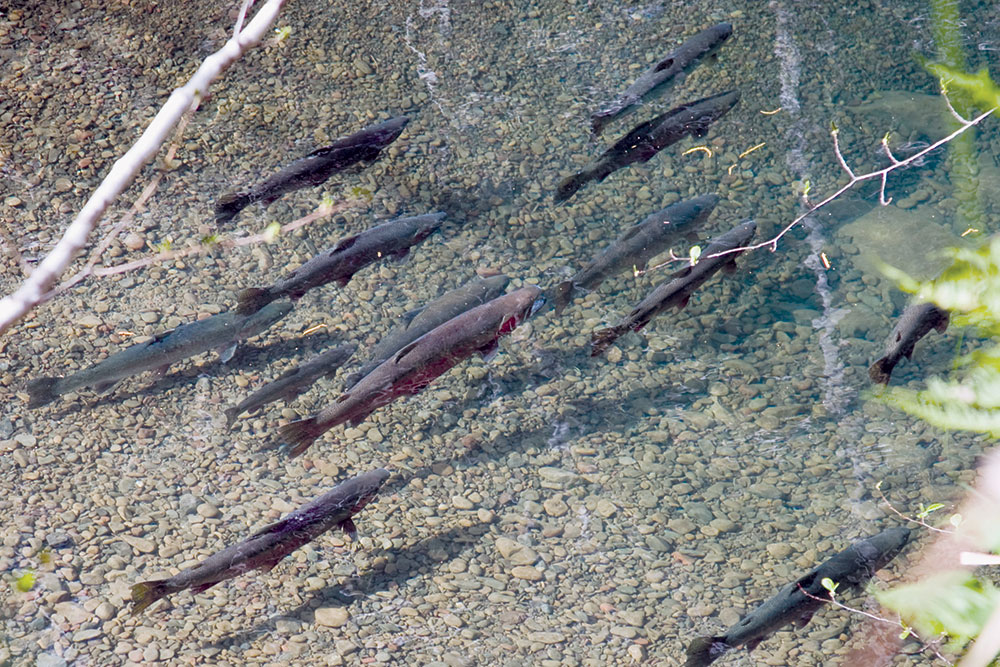 The record October 2021 rains are a distant memory, but those rains seemed to have triggered some very good coho spawning numbers in many North Coast streams. Then we had basically no rain from January 1st through March, and we started getting frantic. April and May rain came as a real blessing and changed our outlook. Good numbers of steelhead that had moved into the lower Mattole and were holding in pools had a chance to move upstream into good spawning areas. And around the July 4th weekend, we actually had a half inch of rain! More, more! Is climate change going to change us into a temperate zone, rather than the Mediterranean climate we have had? Will we have more rains in the summer like the west side of Vancouver Island?

Board of Forestry, CAL FIRE, PG&E All Off Course: System Reform Still Needed

Of course, the overall situation still looks perilous with drought and fire conditions. Earlier this season the attempt to reduce catastrophic fire conditions with prescribed fire by the Forest Service “backfired” (so to speak) into New Mexico’s largest and most destructive wildfire. This is bad on many levels, one being the probable setting back of the kind of “good fire” so important to restoring good forest management—before over-cutting led to huge areas of overstocked catastrophic fire-prone forests. This disaster-prone situation includes not only forests but also other types of fire-ecology landscape types under drought conditions, bad overdevelopment, and fire-prone structure designs and surroundings.

In my previous columns I have ranted about California’s short-sighted panic responses. One droll suggestion is to use these billions being spent (at least a large part) to subsidize emigration out of the State that would get California’s population down from 40 to 20 million—and still be over carrying capacity. How are we going to realistically cope? There are all these earnest funded programs being put out there, and some provide short-term important benefits for some. The reality-connected implementation of conservation ethics that can meet material expectations while abiding by environmental and social needs is even more difficult than surviving drought and fire. In the aftermath of the Camp Fire in Paradise, the newly appointed head of forests and forestry for the California Natural Resources Agency pointed out to the Board of Forestry that the only way California would be able to address the situation was to transcend jurisdictions and ownerships.

With all that’s come about in the past few years, topped off with the latest—the Wildfire and Forest Resilience Task Force—some would claim that transcendence is happening. It could appear that way, with liberal use of smoke and mirrors. For an introduction go to wildfiretaskforce.org.

From my experience so far, it seems like the whole intense history and reality of implementation of AB 1492 has been lost. Becoming law in 2012, AB 1492 was supposed to bring a whole new level of public transparency and participation—specifically, to achieve ecological performance measures, attain basic credibility of evaluation and response to cumulative impacts, and facilitate watershed and forest restoration/recovery. The engine to make all this happen in the law is the Timber Regulation and Forest Restoration Fund/Program. What it has done instead is fund government personnel in a variety of related/unrelated endeavors and streamline exemptions and approvals for logging operations. It also put a cap on liability for forest fires. The big deal was that the Fund/Program was paid by taxes/fees on retail lumber products, absolving permit costs for industry. A comprehensive study and report for reforming forest policy in California sunsetted without being implemented, and the annual reports are years behind.

The Board of Forestry continues, in general, to respond to industry directives with the added panic responses to the catastrophic wildfires. True, long-term standards for forest stewardship seem further away than ever. The mantra of stepping up the pace and scale of thinning and prescribed burning is heard everywhere, with the successor of the Forest Management Task Force, the Wildfire and Forest Resilience Task Force, taking over.

Of course, CAL FIRE is still the “big dog” leading the charge. Coupled with this sad state of affairs is the willy-nilly cutting actions of PG&E to “reduce risk” from power lines. They are giving lessons to CAL FIRE on exemptions from adequate (or any) consideration of adverse impacts. A recent article from CapRadio & KQED highlights problems with CAL FIRE actions but fails to summarize how bad things really are in terms of forest stewardship and an accurate historical record about that failure, and the essential deep-rooted changes that are necessary. Link: https://www.kqed.org/science/1979560/cal-fire-fumbles-key-responsibilities-to-prevent-catastrophic-wildfires-despite-historic-budget

Some recent BoF actions include: reverting back to earlier Fire Safe Regulations (a victory for the public and professional fire personnel); passing the Meadows and Wet Area Amendments that ignored the public and Water Quality and Fish & Wildlife agencies; changing Class II-L Determination Amendments, an extremely rare case of science-based common sense.

A group of Sierra Club members and allies continues to support almost ancient proposals that nonetheless remain valid necessary changes regarding the BoF: having top-tier multi-disciplinary persons on the Board, i.e., fisheries biologists, geologists, or biologists of any type, and providing public administrative appeal of approved THPs, rather than being forced to litigate. THP submitters can administratively appeal approved THPs.

Many new and continuing developments are happening in the struggle over the present and future JDSF. Here’s a worthwhile bit from the recent past:

On March 8th at a Northern Mendocino virtual Town Hall meeting, State Senator Mike McGuire underlined the validity of the JDSF issues championed so strongly by the public and the Tribes. What follows is a transcribed section of his comments: [This is a reprint from my last column, and it remains pertinent.]

“Look, here is my bottom line on the Jackson State Demonstration Forest and I look forward to hearing from all of you:

#1 I believe the model for Jackson Demonstration State Forest is antiquated.

#2 In these modern times, I’m not exactly sure what the forest is demonstrating to the State of California.

#3 I firmly believe that JDSF must have a focus on climate and fire resiliency, which currently it does not have a significant focus on those two critical issues that are impacting our community and our planet.

And I am a firm believer that this State needs to advance a[nd] revamp the management plan early. So, we already know that the CNRA [California Natural Resources Agency] will move up their review and revamp of the management plan 5 years early. It’s actually gonna kick off this year.

And I am also a firm believer that we need to have an interim plan. Because to complete that management plan starting this year it’s probably going to take 24 to 36 months to complete.

So, I believe we need to have everything on the table for this interim plan. And we need to have a serious conversation about what we want the future of the JDSF truly to be.

And candidly it’s beyond time. I’m grateful to so many in this community who have stepped up—Chairman Hunter [Tribal Chairman of the Coyote Valley Pomo] by the way, being the leader on this issue—and I look forward to robust dialogue as we move forward. I’ll be honest that I’m a firm believer that we shouldn’t be cutting these large trees in the Jackson Demonstration State Forest any longer.

There have been rallies in Ukiah and Sacramento led by Pomo Landback, and benefits jointly sponsored by the Coalition for Jackson State Forest, Mendocino Trail Stewards, and Pomo Landback; and multiple tours of places in JDSF have been led by Coyote Valley Tribal Chairman Michael Hunter, CAL FIRE, and others. There are five past approved THPs that are “strategically paused” by CAL FIRE, with intense negotiations relative to Tribal co-management and active or potential “civil defense” of critical areas. In June, CAL FIRE withdrew three THPs for JDSF that were in preparation, stating that this move was made in conjunction with Co-Management negotiations. There has been a lot of push-back from contractors and industry over the five approved THPs that are in various stages of operation. The most well known is “Caspar 500.”

At a CAL FIRE/Jackson Advisory Group (JAG) workshop and tour on May 2nd, a whole set of documents was presented pertaining to JDSF management, science, preparation of a new management plan, some hypothetical conditions for constraints on operations in the Caspar 500 THP (with broader implications), and a report by the JAG Tribal Relations subcommittee. The documents related to putting together a new management plan seemed to be more of an interim type referred to by Senator McGuire, and that plan is intended to be constrained by JAG/CAL FIRE/BoF control. The hypothetical constraints for Caspar 500 featured PETs (Potential Enduring Trees), having 2, 4, or 6 per acre, depending on location in the plan. CAL FIRE is hoping that this approach will be endorsed by famous redwood canopy scientist
Steve Sillett. CAL FIRE also hopes this will be approved by the Tribes, but the agency especially stressed its desire for a solution that would end motivation for forest civil defenders.

One of the most important things to come out of the May 2nd workshop and tour was the “Management Plan Review and Recommendations” written by the JAG Tribal Relations SubGroup. This document provides an overview, background, and summary (including extensive sets of laws, regulations, policies, and proclamations) that lay out the basis for the “Evaluation of existing JDSF Management Plan relative to tribal consultation, access, and co-management.” The report sets out lines of reasoning, with 16 recommendations and several additional important changes, and notes that significant time will be necessary for adequate implementation. On the face of it, large parts of this report are applicable for statewide policy and implementation. The report was presented to the BoF Management Committee June meeting, but it was not in the set of documents available before that meeting. Another important document—again, both for JDSF and broader application—is a letter written by Priscilla Hunter, Tribal Historic Preservation Officer, Coyote Valley Band of Pomo Indians, regarding concerns prior to CAL FIRE proposed amendments to the Soda Gulch THP in JDSF. These concerns are basic for a credible consultation process and adequate standards of respect and protection for Native American Cultural Heritage.

It behooves the public and public trust organizations to pay attention to this issue, as it may be the last chance to have the leverage to reform forest practices in California, not only in Jackson. For more information go to:

I strongly urge you to link to the Salmonid Restoration Federation (SRF) at calsalmon.org and register for the 24th Annual Coho Confab. It will be wonderfully local in Northern Mendocino County this year. It goes from September 9th to 11th. The agenda: https://www.calsalmon.org/sites/default/files/Confab_Agenda_2022.pdf

I am excited, especially about the Anderson Creek tour (9/10), serious Chinook, steelhead, and special coho refugia. I am also prejudiced, having done survey and restoration work there with a hella crew in 1979. Anderson and Usal Creek (9/11 tour) are special parts of Redwood Forest Foundation’s Usal Redwood Forest.

Please help out where and when you can on all the issues before us. Check out the work and other information for Sanctuary Forest, the Institute for Sustainable Forestry (ISF), EPIC, Forests Forever, and Redwood Forest Foundation, Inc. Thank you, Trees Foundation! – rg

Since arriving in the Mattole Valley of Humboldt County in 1971, Richard Gienger has immersed himself in homesteading, forest activism, and watershed restoration. Richard’s column covers a range of issues including fisheries and watershed restoration and forestry, plus describes opportunities for the public to make positive contributions in the administrative and legislative arenas as well as in their own backyards.