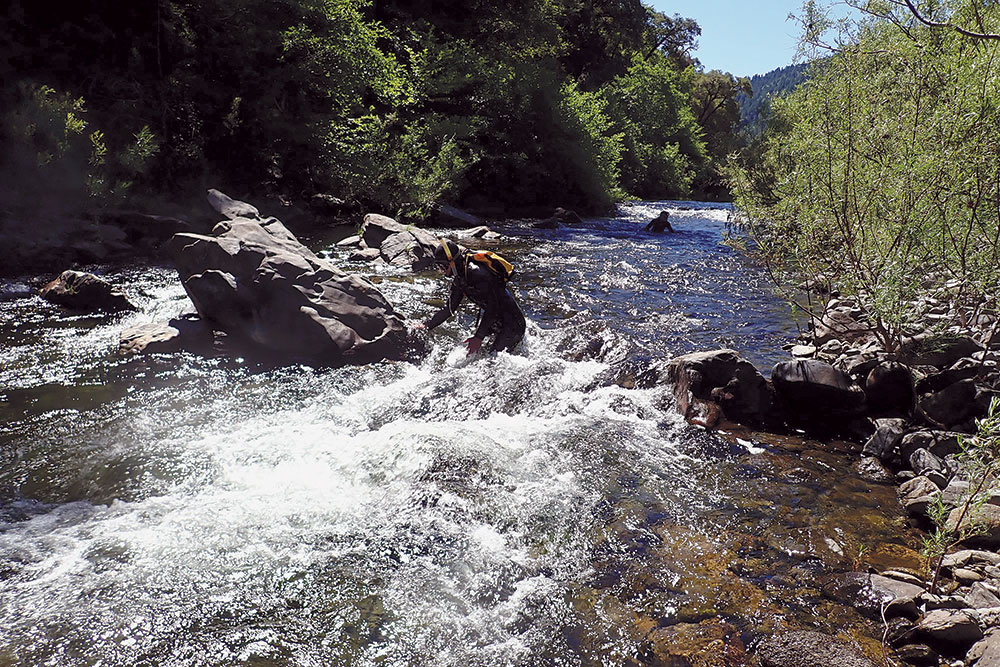 Phil Georgakakos gets ready for plunge into deep high gradient riffle with Stella Stein trailing him. Photo by Pat Higgins

The seventh annual Eel River Recovery Project pikeminnow survey of a key reach of the South Fork Eel River took place on June 28th and 29th. It was determined that despite the population of this non-native predator remaining high, there were a surprising number of salmon and steelhead juveniles and signs of ecological resilience. Once again, the University of California, Berkeley, dive team proved strategic partners. Post-doctoral researcher Phil Georgakakos led a dive team that included undergraduates Michael Schweiker and Stella Stein.

The two-day survey extends from the Hermitage at the mouth of Rattlesnake Creek to Standish Hickey State Park. The mid-point of the survey is Cedar Creek at the Gomde Monastery. Where the first day’s dive ends, the second leg of the survey starts. Divers form a line as they swim through runs and pools and count as a team. Only pikeminnow over four inches in length are counted, with fish of different sizes recorded: 4–8”, 8–12”, 12–16”, and greater than 16 inches. The larger the fish, the more likely that it predates upon juvenile native fish, including salmon and steelhead.

The most surprising part of the dive was the number of juvenile steelhead, with several age classes and fish up to 10 inches long, which could also be native rainbow trout. Because of high flows this year, divers could swim much of the way, knocking insects off rocks while navigating plunging waters. This created a feeding frenzy, and coming out of the bubbles divers saw schools of panicked trout within inches of their masks. Similar to early 2022 surveys, juvenile Chinook were numerous and seen along the entire survey route, and even incidental coho salmon were observed.

After two years of drought, including the fifth and second driest years in recent California history, we expected to see few trout and not many of larger size because of the decrease in habitat. The presence of numerous fish despite the 2020–2021 drought indicates that they were able to find refugia that exist within the SF Eel River ecosystem.

The abundance of Chinook salmon juveniles lingering to feed in freshwater is likely indicative of a large 2021–2022 brood as a result of early rains for spawners to travel and subsequent light winter rains with no scouring flow during incubation. Most Chinook salmon juveniles head for the estuary immediately after emergence from the gravel, so lots of fish exhibiting somewhat rare river life history means many thousands more likely already fed in the estuary and are fattening in the ocean. Since jack salmon can return after just a few months of ocean feeding, we will likely see a high percentage of jacks with this fall’s run and a potential for the population to rebuild. There are indications that coho salmon are resurging in the SF Eel River and also regionally, which is curious since ocean productivity has been inconsistent.

While there are signs of resilience, some native fish species like suckers remain at very depressed levels, likely in part as a result of predation by pikeminnow. Although ERRP was turned down for a California Department of Fish and Wildlife permit to remove adult pikeminnow using trained spear fishermen, the Department is planning to allow removal using a weir to catch them when they migrate seasonally. The Wiyot Tribe, their consultants Stillwater Sciences, and UCB are partners in removal efforts that are slated to take place in spring 2023.

For more pictures of the dive survey, see the ERRP Facebook page, and look for the full study at
www.eelriverrecovery.org. Call 707/223-7200 if you want to be involved in future dive surveys.