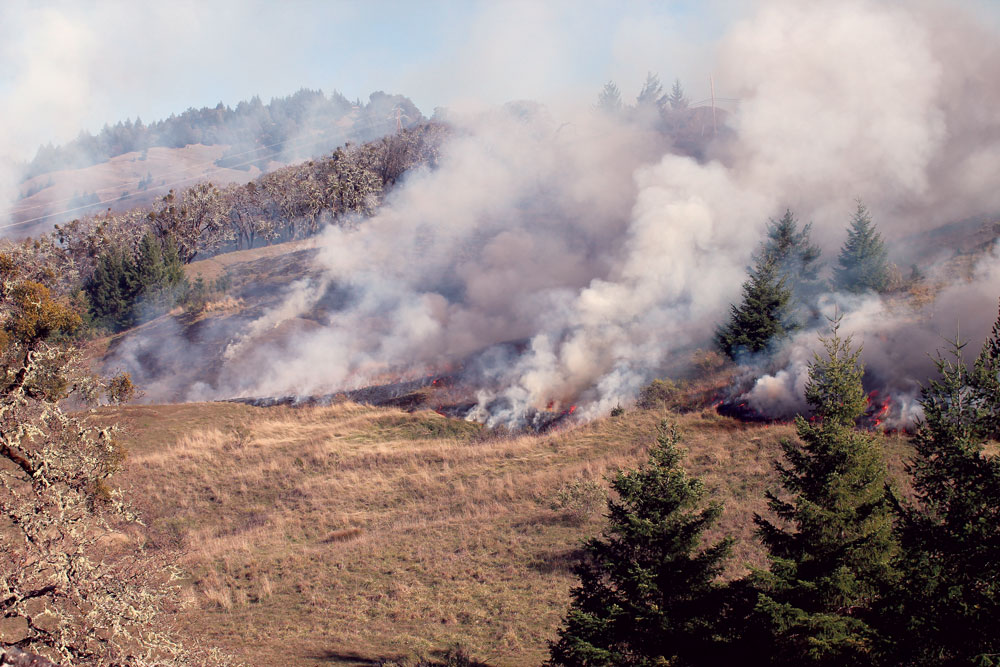 Wildfires represent the single greatest threat to most of our inland communities, especially in recent times, as fires have grown in size, intensity, and damage to people and property. It is critical to acknowledge that fires are not good or evil, they simply are—and like floods, landslides, snowstorms, and earthquakes, how we prepare for them makes all the difference. If a levee were to fail in a severe storm, we would blame the people responsible for inadequate preparation and maintenance; but with wildfires somehow that fault goes unassigned, as if there was nothing to do in advance…. Numbness prevails where there ought to be criticism. Over the past century as communities encroached further into wildlands, fire was “fought,” meaning that all fires were viewed as a threat and therefore excluded or contained wherever possible. This mentality created a situation where immense amounts of fuels have accumulated without a practical way to reduce them. We have largely forgotten, or rather chosen to ignore, fire’s pivotal role in the regular cycle of a healthy ecosystem. These were and still are active choices we are making, influenced by culture, politics, and money; the problem is not fire, it is us. However, where there are problems there are also opportunities. For example, utilizing fire on our own terms, commonly called “prescribed fire,” allows us to reduce the chances of catastrophic wildfires while improving our ecosystem.

Fortunately, efforts are underway here in Southern Humboldt County and beyond to reintroduce fire to the landscape. Recently, my homestead as well as the properties of a handful of motivated neighbors became the site of the ongoing Oak Knoll prescribed burn project. The project, which featured its first of several planned burns on January 27th, is the culmination of many people putting in many volunteer hours of work. The project area includes several connecting parcels with lots of structures, making it a unique opportunity to prove that prescribed burns can work even in a complex situation. The project area encompasses more than 200 acres and half a dozen landowners, all of whom participated in site preparation and the burn days.

Currently, the path to getting a prescribed burn approved on private property is near impossible for landowners to navigate on their own. The Southern Humboldt Prescribed Burn Association, especially Kai Ostrow, provided an enormous amount of expertise and support in the process of making the project a reality, which began over two years ago. Kai was instrumental in crafting the plan, including doing on-site assessments to determine where fire lines were needed and how to ensure that only intended zones would burn. Site preparation mainly consisted of creating or expanding firelines, using hand tools and heavy equipment, and removing ladder fuels near structures. Additionally, water, power, and phone lines needed to be flagged (or preferably buried) to prevent them from being damaged.

The unseen half of the work that is vital to the project’s success is the permit applications. Gina Paine and Kai Ostrow played major roles in getting this project the green light to proceed. The most difficult requirement is obtaining an approved Smoke Management Plan (SMP), which is issued by a local district of the Air Resources Board (ARB). The SMP must assess all the contributing factors to smoke behavior such as weather patterns, smoke travel projections, estimated fuel consumption, as well as contingency plans and smoke minimization techniques. Another major hurdle is the Burn Permit, which is issued by CAL FIRE. This must include an assessment of the risks, how they will be mitigated, how many resources are needed, and how they will be organized. Both permits require the expertise of a professional, must be renewed frequently (every one to two years), and carry fees as well, though there are fee waivers that the private landowner must ask for to receive.

Once all the paperwork has been approved, there are even more hurdles to jump through before fires can be lit. Every nearby school and hospital must be notified (in this case within a five-mile radius), PG&E and the phone line company have to be contacted, CAL FIRE needs a heads-up, and a public announcement has to be made in the newspaper or on the radio within a 20-mile radius, all within a week of the burn date. Then, the Air Quality Control Board will issue you a burn number and only within 48 hours of when you intend to burn—a step that is necessary every time you want to burn more than a few small piles. Depending on the season, the requirements become even more rigorous: Any prescribed burn after the burn permits are suspended (usually May–October) requires the presence of a licensed Burn Boss and insurance, which represents a large cost to the landowner.

Overall, the process of getting to the actual burn day is burdensome and difficult for the landowner, and it doesn’t need to be that way. As recently as a few decades ago, ranchers in this area burned regularly, and the effects can still be seen: the oaks are healthier with less fuel accumulation underneath, the grasslands are composed of more native species, and the amount of encroachment by brush and tree species that increase fire severity such as Coyote Brush and Douglas-fir is minimal. Nowadays, prescribed fires undertaken by private landowners are a rarity, even though it is often the most effective and efficient way to reduce fuel accumulation—indeed, the only feasible way on a large scale. Prescribed fires also benefit our local volunteer fire departments by providing them with opportunities to stay sharp in the offseason and train in real fire scenarios. Unfortunately, it takes a lot of effort, time, and scarce financial resources for VFDs to participate; and even when all of that is in place, a simple “no” from an agency above them can shut it all down, even though those agencies don’t offer much, if any, support. CAL FIRE took an “observe and only intervene in an emergency” approach; PG&E sent engines and personnel who were helpful, but their main office was not happy about it; the Air Quality Control Board frequently misplaced our paperwork…. This is all to say it is disheartening to have to try so hard to get permission to do a helpful thing.

The Need for a Mindset Change

While the project has been a relative success so far, there is still much more work to be done, both on this project and in our community. In my opinion, the mindset needs to change. There needs to be an emphasis on stewardship, on responsibility, and on the entwined nature of communities of humans within themselves and within the land they exist and subsist on. A property that regularly receives prescribed fire not only protects itself but its neighbors as well, because it can be relied upon to slow or even halt the progress of a wildfire. We need to view ourselves as a part of the land, not above it, not below it. The peoples that lived here before this era used fire regularly and recognized it as well as themselves as agents of positive change. We need to view fire, when done intentionally, as humankind working in harmony with the land and with each other. Currently, our cultural values and our legal system view prescribed fire as disturbance, when in fact fire exclusion is the unnatural state. Correcting this begins with each of us evolving our perspectives. I encourage anyone who is doubtful or fearful about prescribed fire to do their research, or even better, participate. You will find that prescribed fires are not that intense, that the landscape often looks better shortly afterwards, and you will also find a community of fun, friendly people who are working hard with good intentions. Being prepared for wildfires requires action; a good place to start is to make sure your property is defensible, then contact your local prescribed burn association, and always support your local volunteer fire department.