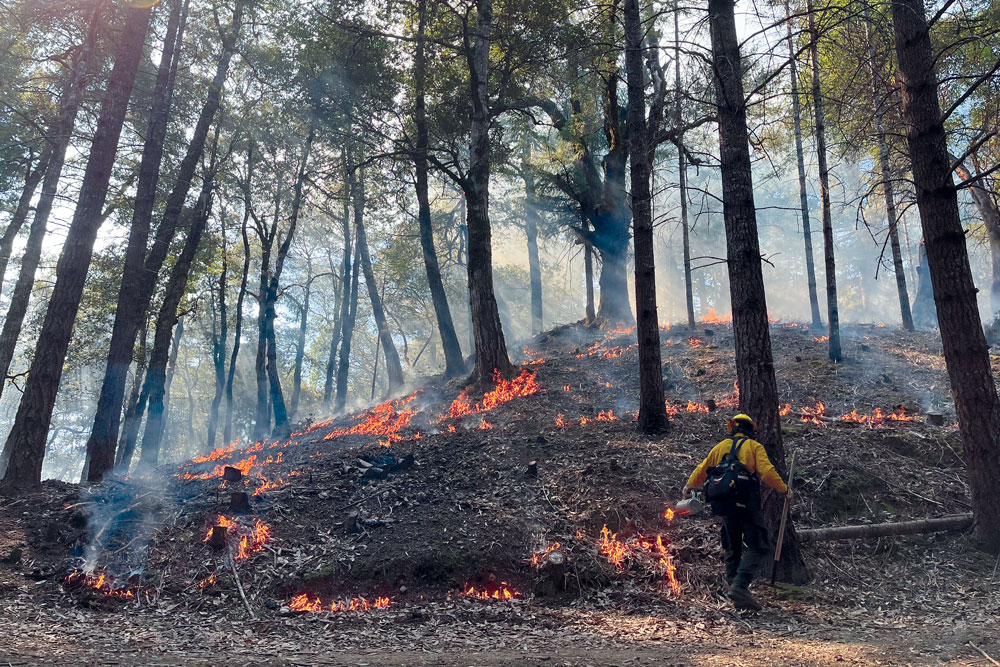 Charged into the marrow of my life is how I felt participating in the Stansberry Ranch’s 109-acre prescribed burn that occurred in February just outside Honeydew, California. The Buckeye Ridge burn was supposed to happen in the fall of 2020, but the river was the force that prevented it. The Mattole River runs through the Stansberry Ranch and can only be crossed during low flows. The burn was again supposed to happen in the fall of 2021, but the drought, a shrinking burn season, and the rains that swelled the river in December closed the door again. But drought-ridden February was a magical prescribed burn time in Southern Humboldt, as other articles in this issue testify.

One can never crow enough over the stunning views of the Stansberry Ranch. It is a true wild and working ranch with beautiful forest stands, cows, sheep, great stock dogs, and Bob, whose family has managed the property for the last century. In 2006, Bob Stansberry partnered with Save the Redwoods League (League) to put a conservation easement on the property, protecting the ranch from future subdivision, which is how the League got involved in management. Since then other projects have taken place including an earlier grassland burn in 2019 led by the Humboldt County Prescribed Burn Association.

The Buckeye Ridge burn unit was already part of a CAL FIRE-funded Climate Change Investment grant awarded to Save the Redwoods League. The Mattole Restoration Council’s (MRC) Fire and Fuels crew contracted with the League to both prep the burn unit and create 250 acres of shaded fuel break along ridgelines of the Redwoods to the Sea Wildlife Corridor, which includes the Stansberry Ranch and Bureau of Land Management land on either side. Fortunately, the burn unit’s ridgeline perimeter had already been treated as part of the shaded fuel break the crew created in 2020-2021.

MRC crew had twice prepped the burn unit, originally 232 acres in size. “Prepping” involved hacking away a three-foot, bared-to-the-soil scratch line along the untreated perimeters to discourage fire creeping across the lines. Scratch lines were created both in meadow areas and through the forest, over steep terrain. Additionally, an untreated forested perimeter needed a 20-foot shaded fuel break with all large fuels dragged outside the unit for 50 feet with the scratch line down the center. About half of the original burn unit was primarily grassland. The grass was green and short and just not going to burn, which is why the plan in February only included the upper half of the unit or 109 mostly forested acres. One contingency involved getting a temporary water tank filled for the forested flank, where a hose lay assisted the “holding crew.”

The goal of the Buckeye Ridge burn was to build resilience to wildfire in the forest. The unit is composed of Douglas-fir trees of several ages from youngsters to the almost elderly, intermixed with oak and madrone. There was definitely an over-population of young Douglas-fir in about half of the unit.

Suffice to say, the day of the Burn felt like it had been a long time coming. Phil Dye of Prometheus Fire Consulting was the official Burn Boss, a title that carries the liability for the burn. At the morning briefing we divided into firing squads and a holding team. The lineup was impressive. Volunteers ready to burn included members of Humboldt’s Prescribed Burn Association, Save the Redwoods League, MRC crew, the Briceland, Shelter Cove, and Redway Volunteer Fire Departments, the Stansberry Family, and neighbors. We were also joined by Cal Poly Humboldt students there to learn how to burn. Fire engines that participated included Honeydew, Whitethorn, Miranda, and CAL FIRE.

First ignition was at 11 am and from there the firing squads kept it going until 4 pm. A black line was created by igniting the forest floor using drip torches in 5- to 10-foot sections backing down from the ridge. Once a secured ‘black’ was made, larger sections were consumed. The objective was to burn the fine fuels and young trees that tend to choke the forest and elevate the fire threat. At completion there was good consumption of fine fuels and dead material (or 1- to 10-hour fuels), but only a mosaic of 100-hour fuels or live young trees that got hot enough to burn. Stumps, once engaged, held fire, and even some large trees that were not targeted were eventually lost due, I believe, to the years-long drought drying the outside bark. MRC crew spent two extra nights checking on the burn and found that a few older trees had fallen from fire damage and winds.

Every Burn will be Different

And here I want to say that every burn will be different. I had previously only participated on prescribed fire in grassland/brush scenarios. This was different, and I was even more excited as it is the landscape within which I live—the forest. And it is scary to light the match, so we all will need to be careful on the where and when parts. But the why is critical. The older trees that scarred or went down post-burn hurt; maybe we could have done more to protect them. But if it had been a wildfire, all of it would likely have been lost. Buckeye Ridge has been enhanced with planned fire, building resiliency into one dry forest of the Mattole watershed. We can and must do more. Burned forested acres give some relief from wildfire threat, a relief that almost sparkles with hope and beauty, one in which we are again the torch bearers lighting our own futures. I imagine all sorts of little bugs and critters coming back in and snorting or rifling around. I can’t wait to get back and check it out in a year, to see sun enlighten the forest with a new glow.

All in all, a tremendous feeling of accomplishment seemed shared by everyone at the debriefing that burn day afternoon. Gobs of gratitude not only for those who showed up, but also for all the burners out there. There is no doubt in my mind that we as a people of our western United States simply must plan for and execute more prescribed burns. This year, in particular, seems poised for a long wildfire season. Fire is our tool and if we don’t use it, we will lose….