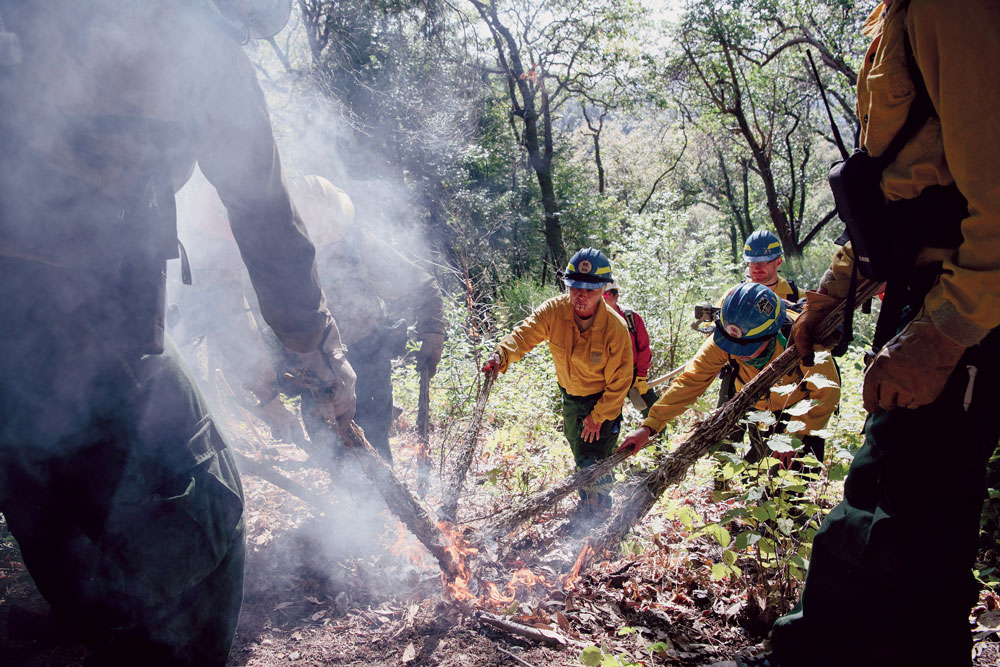 The following is a transcript of the talk given by Margo Robbins during a webinar hosted by Trees Foundation on Oct. 3rd, 2021 titled “Pathways to Fire Resilience.” She refers to some photos from her slideshow that don’t appear here, but you may watch her full presentation with slides by visiting tinyurl.com/pathwaystofireresilience. Other speakers on the webinar included Ali Freedlund, Lenya Quinn-Davidson, Tim Bailey, Will Harling, and Cybelle Immitt.

Hello my name is Margo Robbins, Co-founder and Executive Director of the Cultural Fire Management Council and Co-founder and Co-lead of the Indigenous People’s Burn Network.

Traditionally, native people used fire as a land management tool and in ceremony. Our ancestors burned from the coastline to the high mountain peaks, stewarding the forest to ensure healthy outcomes for the plants, the animals and the people. Wildfire protection was a by-product of these burn practices. The suppression era uprooted these natural land management practices, devastating the delicate balance of the ecosystem. In the face of the current climate crisis we are facing, it’s imperative that decision makers keep the knowledge of thousands of years of successful land stewardship when we as native people took care of the land, we now call the United States.

There has been significant progress in this last year towards incorporating native perspectives and traditional ecological knowledge into the decision-making processes. There has been legislation passed addressing liability and insurance needs, and also recognizing cultural practitioners and tribes right to take care of the land with fire.

The Cultural Fire Management Council is a non-profit organization based in far Northern California. And when I say that we’re community-based, we are literally community based. We started out as a handful of people with the driving need to bring fire back to the land. We didn’t have any money, we didn’t have any political power, but we had determination to do what needed to be done for our community.

Yurok people are people that are basket makers. We use baskets for everything from birth until death, but our baskets require fire to burn the hazel, which is the base of our basket. So that was one of the reasons that we needed to bring fire back to the land.

The other reason is that we were afraid that if there was a wildfire, our elders might not be able to escape. So we started down this path of learning first, who controls fire? Who controls the use of fire? What are the laws and policies governing the use of fire, and what did we need to do to start using fire again on our landscapes? And that’s what we did, as a small community group. We did research and we found out what the rules are governing the use of fire. We found out that you need to have basic entry level firefighter qualifications, so we had a community class, and we brought in a Burn Boss that taught the basic 32 entry level fire fighting course. And so we had community members with qualifications to be out on a fire line. We connected with the Nature Conservancy who instituted the TREX model of burning on our homelands, and people from across the United States and sometimes even other countries, come to help us burn our lands. People have all levels of qualifications from the highest level of incident command or Burn Bosses, down to entry level firefighters, some of them have never been on a fire before. They are trained up, not in the classroom, but on the land.

Fire is put into the hands of the people, and they learn how to do it in a way that’s not big and scary. It’s not putting fire out, it is putting fire on the land in a good way to restore the land. And people learn that the land is meant to have fire on it. Our ecosystems depend on fire to be healthy, not just the plants, not just the animals, not just the people, but even the water. Fire affects the water—fire on the land increases the water table, and it purifies the water. The biochar that’s left on the ground after a burn purifies the water. The ash that’s left on the ground works its way into the soil, and it makes the soil healthy again. The plants that come back after a burn, that new growth, it’s very, very nutritious…Animals always come back to the places where we have burned. Every place we have burned, we see deer in there, we see woodpeckers, my nephew even saw a flying squirrel one time. I didn’t even know we had flying squirrels in our ancestral territory, but with fire, the ecosystem comes back into balance.

There are many ways that would be helpful to increase the pace and scale of prescribed burns and cultural burns. One is that tribal sovereignty needs to be recognized. We have inhabited these lands for thousands of years. Nobody knows better than us what our land needs, and it doesn’t make sense that we have to get permission from somebody else to burn our own lands.

Native people should have the right to burn in the right place at the right time. When we are out on the land and we’re burning for cultural purposes, this is a natural process. Land was meant to have fire, and we as humans were meant to help put that fire on the land. We can’t just wait for the lightning strikes to come. We need to take our place in the ecosystems and do what we were meant to do, which is to care for the land. Cultural burns should be exempt from air quality regulations, because they are a natural process.

You will see in this picture a few different kinds of burns. One is a prairie burn on the right, and my sister in fire, Elizabeth Azuzz is lighting a wormwood torch. Usually we will start our fires with the wormwood, it’s medicine. We’ll send a prayer with that smoke and we’ll start our fires with that. After that, we’ll use the drip torches to carry the fire across the land, starting at the top of the slope and working our way down.

You’ll see, on the left, a burn that we did around an elder’s home, creating a safety barrier around it. We had already burned up behind his house down to the back side, within six feet of his house. He and his wife were in their house, just doing whatever it was they were doing, and then we went down around to the front side and started carrying the fire down that hill.

In the bottom of this picture, you’ll see the Yurok tribe wildland fire truck, and the cultural fire truck. We have a little slip-on engine, it holds a couple hundred gallons of water and a pump to pump water at high pressure., and this is what we use to help people burn around their homes and gathering places. Fire needs to be returned to the hands of the people, government agencies, non-government agencies, tribes, individuals, we all need to start working together to return fire to the land in the different capacities that we assume.

Native people no longer own or occupy all of the land, and so non-native people need to take upon themselves the responsibility to care for the land that they own as well. Fire should not just be in the hands of the government, it needs to be returned to the hands of the people. Thank you.