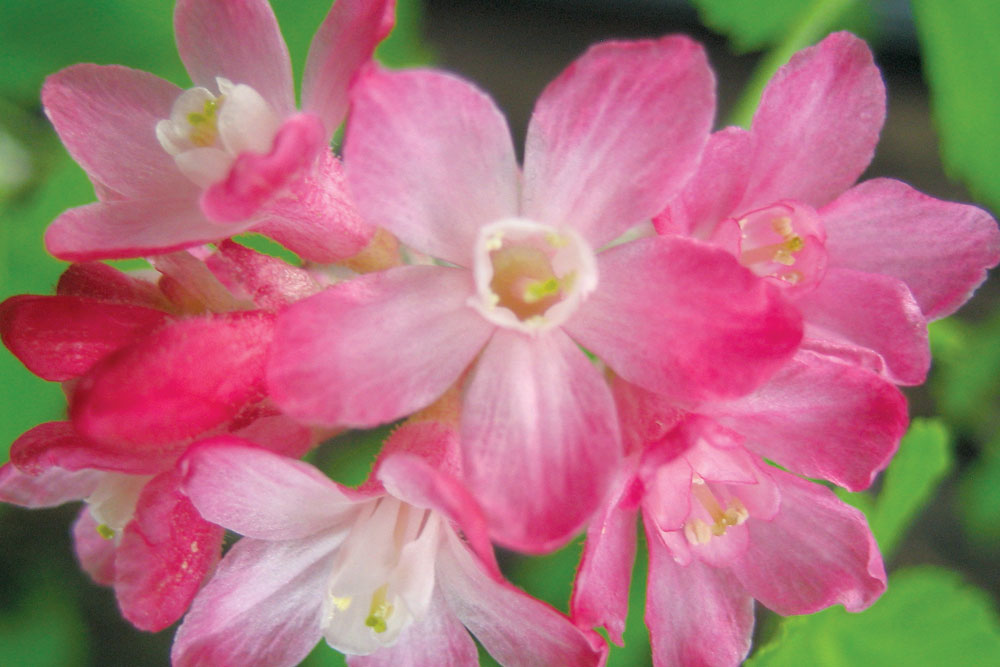 Many of California’s native shrubs are resilient to fire, surviving underground with their strong root systems. Shortly after a fire, these shrubs will sprout new growth from their root crown. One such crown sprouter is flowering currant, Ribes sanguineum, which, when in bloom is one of the showiest of our native shrubs. Blooming in late winter/early spring, the pink flowers appear about the same time as the plant leafs out after winter dormancy. Flower color can vary from white to palest pink to a deep, dark pink. In summer, waxy dark purple berries form, which are enjoyed by birds and are edible for humans. Leaves are somewhat maple-shaped with three prominent lobes, are slightly fragrant, and slightly fuzzy.

Native people in California manage the growth of flowering currant as well as other species of shrubs for creating utilitarian items, such as arrow shafts and baskets, and for food. The purposeful burning of flowering currant produces long, straight, uniform shoots, and burning as well as pruning out of old wood enhances berry production. Traditional burning practices also help keep pests and diseases at bay, and keep larger plants and trees from encroaching on currants and other food plants and shading them out.

There are two varieties of Ribes sanguineum; var. glutinosum grows closer to the coast and in the outer Coast Range, from sea level to 5,000 feet, while var. sanguineum grows in the Klamath Range and inner parts of the North Coast Range. The species ranges from British Columbia to Santa Barbara County.