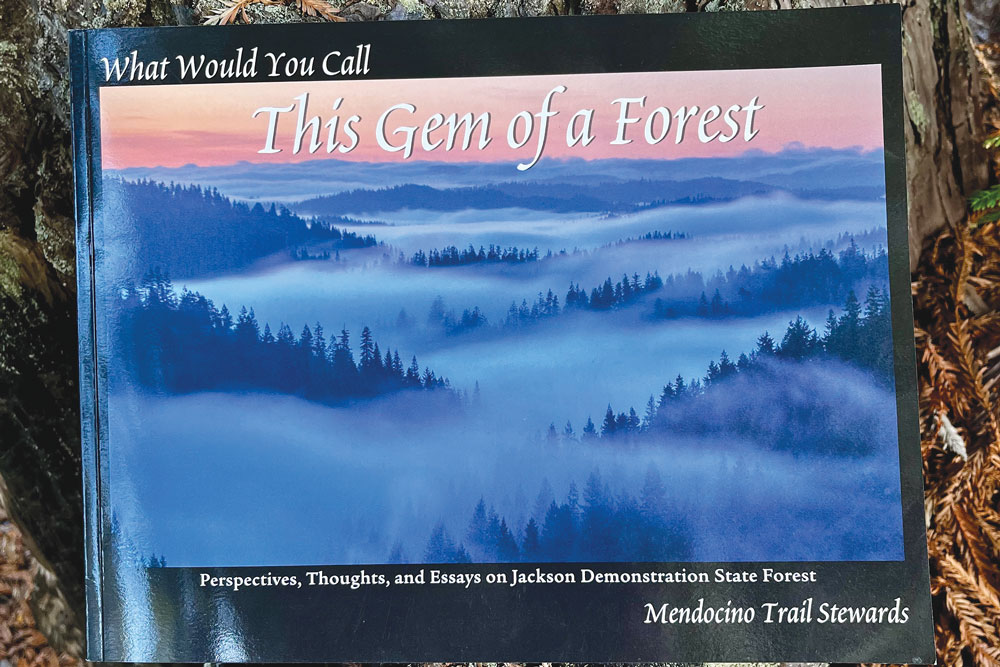 In December 2021, the Mendocino Trail Stewards published a coffee table book about Jackson Demonstration State Forest entitled What Would You Call This Gem of a Forest. This volume gives perspectives, thoughts, images, and essays of the place that the Coalition to Save Jackson, The People’s Forest, are fighting for. What follows is the foreword to the book, edited for length.

…This place has obsessed so many of us and continues to cast its spell on unwitting bystanders, this place that we tragically now know as Jackson—after Jacob Green Jackson, the man responsible for the forest’s first destruction. This place where, 170 years ago, European settlers arrived and saw what to them was a Garden of Eden, the redwoods apples, ripe for the picking.

They didn’t know—didn’t care to know—that the people who already lived here, the Pomo and the Yuki, with their partner, fire, had gardened the forests for 10,000 years without felling a single large redwood. Instead, in their myopic focus on wealth, the settlers put prices on innocent human heads, hunted them down, the survivors forced by greed onto small reservations which were used by their overseers more as cash cows than anything else.

These people knew the plants by name, by smell, by taste, and by place. They ate acorns with coltsfoot ash, made waterproof baskets from sedges and rushes, chewed on cardamine roots for toothaches, put mugwort branches in their pillows for dreams, drank special secret teas to speed their children out of the womb.

They used to live here. Some still do. It seems so long ago, like slavery—most people, who don’t understand it, think we should just forget it. We should just stop talking about it, because it was so long ago. Deep, however, it lurks in our species memory, and a horror is still right on the surface for some.

This slaughter of people, yet another genocide, ended as the slaughter of the redwoods began. Jacob Green Jackson named his mill after Seigfried Caspar, another shining example of what it means to come to a place that is owned by others, souls who didn’t even consider ownership a thing, and take that place. Take that place, and raze it. Take all the walls, all the ceilings, all the carpets, all the furs.

We must stop and sit and hear the squirrels, the rustle of the branches, the frogs in the moist spots, the silence. The ghosts and the ravens and the children playing in the streams. We can begin to learn what so many others for thousands of years knew.