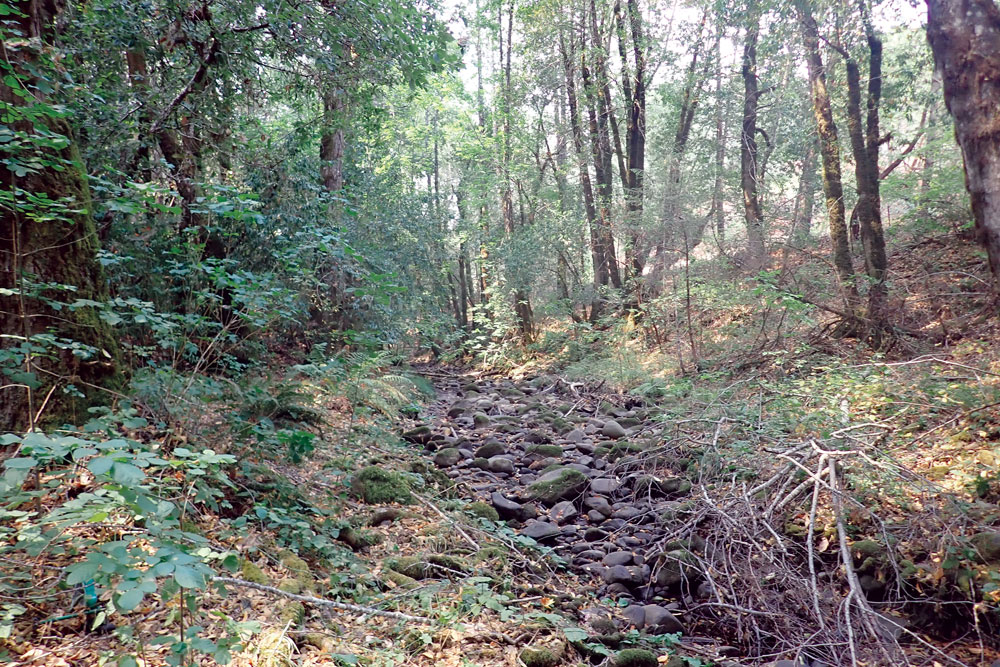 The Eel River Recovery Project (ERRP) has been awarded California Coastal Commission Prop 1 grants in the 65-square-mile Tenmile Creek watershed since 2018 to help fund tasks that include monitoring and reporting on water temperature and flow, and the fish community. The group has its headquarters in Laytonville, the major developed area within the basin.

Hydrologists track rainfall and flows by Water Years (WY) that begin on October 1 and run through September 30 of the year for which the WY is named. The latest ERRP report to be released (posted on eelriverrecovery.org) recaps aquatic conditions in WY 2020 and WY 2021, when rainfall was less than 50% of normal in both years. They turned out to be the fifth and second driest years in California history, respectively, and lack of groundwater recharge in the first year created greater problems for fish and flow in WY 2021.

In WY 2020 surface flow was maintained at locations in several tributaries and also in some main Tenmile Creek reaches. For example, Tenmile Creek between Little Case Creek and Wilson Creek flowed continuously and was cold enough for steelhead juveniles, even though reaches upstream and downstream went dry. Lower Tenmile Creek below Grub Creek also stayed on the surface in WY 2020, although water there was warmer and more suited for warm-water fish like the California roach. Some streams, such as Lewis Creek on the east side of the watershed, became disconnected as flows dropped but maintained isolated pools that supported juvenile steelhead and/or native trout.

In WY 2021, only Peterson Creek and the reach of lower Tenmile Creek downstream of its mouth retained surface flow, and ERRP verified trout juveniles at only two locations. In addition to Peterson Creek, upper Cahto Creek on the Cahto Creek Ranch had juvenile steelhead; however, they survived in isolated pools. Almost all other stream reaches in Tenmile Creek were completely dry by July 2021, which is unprecedented in recent history.

Surprisingly, Tenmile Creek had very high standing crops of juvenile steelhead in May 2021, when ERRP conducted surveys, and compared very favorably with Outlet Creek at the time, indicating the latter is more impaired. Despite the drought, a late September 2021 ERRP survey of the nearby upper South Fork Eel River found both steelhead and coho salmon juveniles in abundance, and the latter require even colder water than steelhead. This is a cause for hope, as the South Fork Eel is in advanced recovery from past logging, and active restoration of Tenmile Creek watershed hydrology could accelerate recovery so flows are better maintained in future droughts.

The ERRP report stresses that in the short term we can’t control how much rain falls, but we can alter how much percolates into the ground versus how much runs off. The Cahto Tribe lived in the Tenmile Creek watershed since time immemorial, and they nurtured wetlands and wet meadows and created impoundments. Their approach to water was “slow it, spread it, sink it” (a phrase coined by Brock Dolman of the Occidental Ecology Center). European settlers had the opposite objective and ethic—“ditch it, dike it, drain it”—to maximize agricultural development. There is a major legacy of post-colonial hydrologic disruption, and we need to restore watershed hydrology as a means of coping with drought, as well as conserve water to the fullest extent possible.

On the conservation front, ERRP is assisting Tenmile Creek watershed residents who hope to obtain grants for augmented water storage, with rainfall capture used as the primary source to the extent feasible. This will allow residents to meet their domestic water needs while forbearing from surface water or connected groundwater use during annual low-flow periods.

A number of watershed management activities can be implemented to augment groundwater storage and flow, including those associated with forest and grassland health restoration. Post-WW II clearcutting led to conversion of old-growth forests that use water sparingly in summer to over-crowded young conifer forests that use approximately three times more water due to increased evapotranspiration (Evapotranspiration is the sum of evaporation from the land surface plus transpiration from plants). In another consequential shift, cessation of Indigenous burning has let Douglas-fir spread into oak forests, which also leads to less water yield as oaks need little water in summer and Douglas-fir trees use a lot. Consequently, thinning Douglas-fir trees from over-stocked conifer forests and from within oak groves can help increase stream base-flows, with the added benefit of increasing biodiversity because thriving oak trees will produce more acorns.

WY 2022 started much differently, with a major storm event in late October that allowed disbursement of Chinook salmon into Tenmile Creek and its tributaries in fall for the first time in three years. Unfortunately, the lack of significant rainfall between January and March 2022 could indicate that a third year of sequential drought is lining up.

Regardless, using resources available for forest health and fire prevention for integrated watershed restoration can help buffer us from the effects of climate change, including increasing stream base-flow, if we organize and act now.