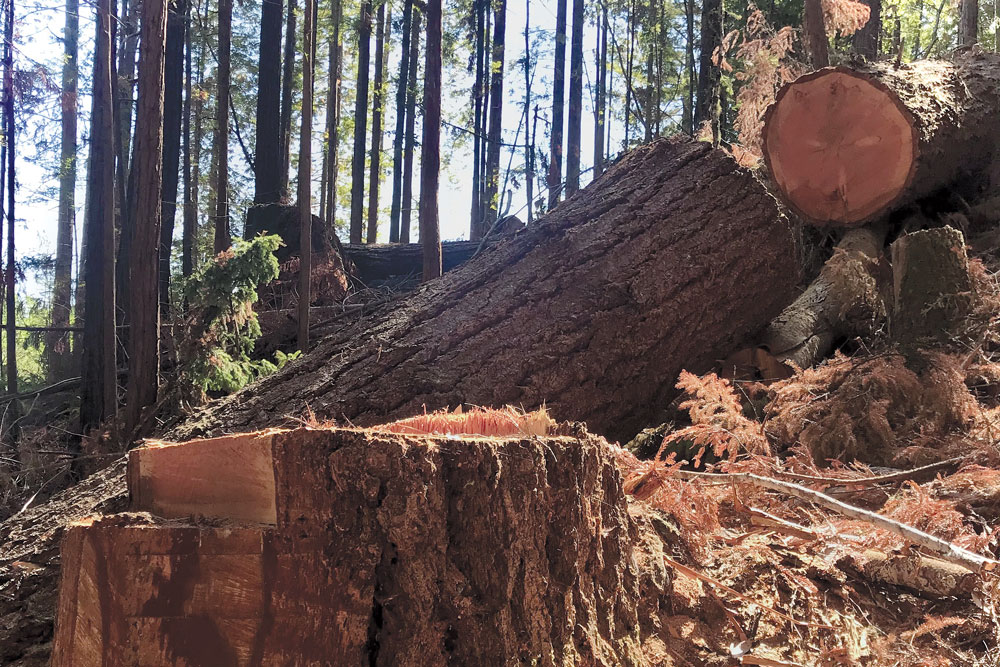 Author’s note: We in no way mean to disrespect first responders who put their lives on the line to protect us, but the California Department of Forestry and Fire Protection (CDF), known as CAL FIRE since 2007, has two conflicting mandates—forestry and fire response—which makes any criticism of one appear to be criticism of the other. On this topic, google “CAL FIRE Divorce” for an article by Richard A. Wilson, Director of CDF from 1991 to 1999.

On September 29, 2021, State Forests Program Manager Kevin Conway sent an email to Chad Swimmer of the Mendocino Trail Stewards containing the following threat: “Unauthorized special use…on JDSF [Jackson Demonstration State Forest] is a violation of State law and continuing to do so will result in a criminal and civil action….” He points to outreach our group has carried out, fundraising efforts, announcements for events protesting management priorities, and videos, including the use of drones, to document practices denied by officials in Sacramento.

Coalition to Save Jackson

The Coalition to Save Jackson, which includes The Trail Stewards, The Coyote Valley Band of Pomo, and the Environmental Protection Information Center (EPIC), has staged more than a year of actions protesting the cutting of large conifers (see photo page 44), the use of substantial amounts of scarce water to keep dust on roads down, and the wholesale poisoning of oaks. Why are the following demands so unacceptable to CAL FIRE?

Foresters and timber industry representatives with a vested interest in maintaining the status quo claim that the mandate for JDSF is set in stone: economic timber production. This is based in the legislation that founded the Demonstration Forest System in 1949. We must note that that year saw the awarding of the Nobel Prize in Medicine to the doctor who invented the lobotomy, the detonation of nuclear warheads in close proximity to innocent American soldiers to test the effects of radiation on human beings, and the full-scale continuation of the Tuskegee Syphilis Study. Climate change—now a clear and present danger to our species’ survival on Earth—was not even considered. It goes without saying that all laws and legislation of the time should be reexamined expeditiously.

CAL FIRE has made many statements showing that it considers itself above the will of the people, most notably at the August 3 Jackson Advisory Group Meeting, when they declared that they, as a state agency, are not subject to county laws—the law in question being Measure V, approved in 2016 by 62% of county voters. This law bans the leaving of standing, poisoned trees, but had it been possible within the statewide legal framework, the law would have banned the practice of “hack ’n’ squirt” entirely.

As Thomas Wheeler, Executive Director of EPIC, stated in his defense of The Trail Stewards, “The First Amendment abhors restrictions on speech. This is particularly true on government-owned land, like the Jackson Demonstration State Forest. As the Supreme Court has recognized, ‘Wherever the title of streets and parks may rest, they have immemorially been held…for purposes of assembly, communicating thoughts between citizens, and discussing public questions. Such use…has, from ancient times, been a part of the privileges, immunities, rights, and liberties of citizens’.” (Shuttlesworth v. Birmingham, 1963) In a democracy, the government should not be considered immune from public opinion, nor above the law. CAL FIRE: please stand down immediately and listen to the people you are supposed to serve.