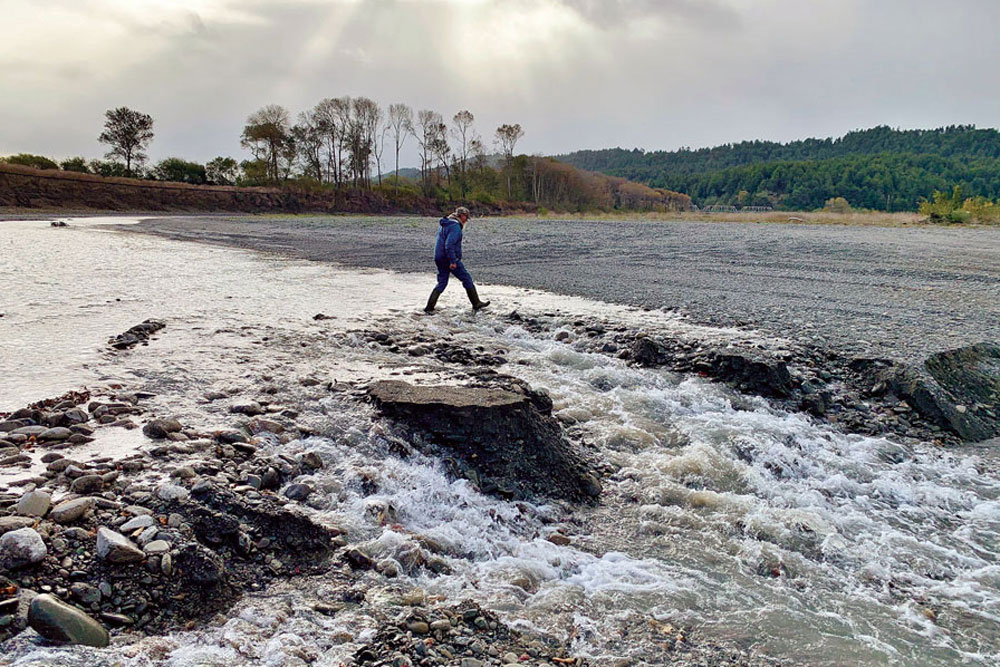 Got the existential blues these days, except for the wonderful return of the rains since the 15th of October. From dry or barely damp stream and river beds to record flows for the month of October. Bursting optimism for salmon migration and spawning and for continued rains through the fall, winter, and spring. Lingering concern that, despite record-breaking early flows, the rains may be fickle (as in so many recent years past) and end up sputtering until later or much later in spawning season. We are overdue for a high-water winter—hang on and be prepared for floods and more drought. Hopes and prayers are out there for a hugely successful spawning and survival year.

Hard hit and shocked by the sudden passing of John Rogers on 29th September 2021.

Thinking About and Missing John

John William Rogers has been a vital, steady, and integral part of the cultural, social, and intellectual life of Southern Humboldt and Northern Mendocino Counties since the 1970s. His thought and influence reaches Northern California and to forests and forest-connected people in North America and beyond. His sudden passing was tragic and shocking. A beautiful obituary written by his family can be seen online by searching “Kym Kemp John William Rogers.” The family is planning a memorial for John in the spring. In lieu of flowers, please send any memories, stories, accomplishments, pictures, or bad jokes in memory of John to his daughter at [email protected]. See also the article in this issue with highlights from a KMUD on-air tribute to John (page 26).

I have crossed paths many times and spent appreciable periods of time with John since our first meeting. Some of the special experiences were John’s participation in the founding of the Institute for Sustainable Forestry (ISF), his immersion into woodworking, the growth and solidity of ISF, providing leadership, and an incredible knowledge and perspective of forestry – all with great depth of thought.

My most cherished time with John has been on the Boards of Redwood Forest Foundation, Inc. (RFFI) and the Usal Redwood Forest (URF) since 2008. John’s commitment to RFFI’s principles was unwavering. His dedication to forming and implementing a Stewardship Plan are invaluable now and for the future. The manifestation of that effort most recently is in the basics of the current strategic plan focusing on climate, carbon, water, habitat, and community connection. His loss at this time is especially painful.

Three parts of John’s commitment stand out: His adamancy that a truly productive forest is a forest that is predominantly composed of large and high-quality trees and high-quality habitat; that surrounding communities must be intertwined with that forest and its management; and that it be accomplished without the use of herbicides. We must honor that commitment and continue and expand his leadership. John was always aware of and responding to the primal inspiration and need for efforts exemplified by RFFI, URF, and ISF.

“John’s pronouncements on issues surrounding forest management were often delivered sotto voce but none-the-less fierce—Rudi Becking-esque incantations on all-age forestry, appropriate discount rates, paeans to the Gods who dwell in stands of large old trees and in quiet indignation to the far lesser Gods, those of the pecker-poles that the industry seems far happier to produce. John, I repeat, was and will be remembered as the Sherman Tank of Sustainable Forestry—and a truly kind and brilliant friend to many of us who love the forest.”

[Rudi Becking (1923–2009) was an indomitable personality, forester, environmentalist—hero to many with a lot of hard-bitten foes. He was hung in effigy when he taught at Humboldt State University during the fight over protection and expansion of Redwood National Park. He was a plaintiff in the NRDC v. Arcata National Corp. lawsuit that prompted the California Court of Appeal ruling confirming the application of the California Environmental Quality Act (CEQA) and its Environmental Impact Report (EIR) to forest practices. He was of the old-school, “forester knowing every tree in the area of his stewardship.” From heated contention over forest management at the Mendocino County Board of Supervisors: “Dr. Becking summarized the basics of the Plenterung method he’s been propounding over the 40-year span of his internationally recognized professional career. ‘Plenterung,’ he explained, means literally ‘pick and choose’ and is a form of uneven-aged, selection silviculture that stimulates quality growth and maintains constant volumes and closed canopies, and works towards optimum productivity levels for all species. The method emphasizes natural regeneration for increased genetic strength, protects old growth and seeks to restore the environmental quality of soil, water and wildlife.”]

There is always so much, too much, to cover in these columns. There were a couple lists of issues I wanted to cover in the last column. The lists were pretty long, and without directly checking I can’t remember what I got to and what I didn’t. I do remember that I included an April 2021 letter from Forests Forever and Why Forests Matter to CalFire regarding the issue(s) connected to Jackson Demonstration State Forest (JDSF) and the essential need for a minimum two-year moratorium until a qualified and independent public and indigenous-based panel makes implementable reforms for JDSF management—which can then be applied to reforms that are necessary state-wide.

California is gripped by crises from top to bottom: drought, huge fires, over 40 million people way over carrying capacity for the land and water. The solutions being put forward are quite literally smoke and mirrors, including forest liquidation (excuse me, thinning) with the massive amounts of thinnings to be miraculously turned into electric power with all the massive amounts of resultant CO2 magically, with pipedream technology, piped deep into subterranean geological layers. Thinning and prescribed burning (particularly that based on Traditional Ecological Knowledge, TEK) can be excellent tools, but the funds and process for application are not adequate. There is complete resistance to establishing the standards necessary for multi-generational recovery of the forests and a sane relationship with human communities. Of course, that’s exactly the opposite of what is being claimed. California is hell-bent on programs that claim to protect human communities and fight climate change while disconnecting people from appropriately scaled relationships and continuing the economic juggernaut that put us in these circumstances to begin with. Read Mark Arax’s The Dreamt Land for starters.

Here’s a couple literary “follow-ups” I’ve come across: One is broad in scope and a deep, deep examination of Western “civilization” and forests, from ancient mythology to the present day: Forests —The Shadow of Civilization by Robert Pogue Harrison. I’m over halfway through it, and I got a good laugh from the mountain bikers around a campfire at Usal recently, telling them I was only able to get through about four pages a night. Harrison, halfway through, bringing in Joseph Conrad’s Heart of Darkness:

“The juxtaposed relation between the primitive forests and civilized Europe, then, is at once analogical and topographical. The African jungles are literally remote from Europe, yet their wilderness provokes the most intimate cultural confession—a failure in the power of devotion, a failure of the idea, a failure, in essence, of European morality. In Heart of Darkness forests appear as the locus of this revelation. What the forest’s darkness reveals is precisely what remains concealed under the gloom that broods over the metropolitan crowd of men, namely Western nihilism at the turn of the twentieth century. Conrad’s heart of darkness—the heart of the forest within and without—exposes nihilism not so much as the savagery and greed that lie beneath the humane postures of colonialism, but as the absence of a redemptive idea in the West’s conquest of the earth.”

He describes humans in the ancient mythological times entrapped in dense forests everywhere, unable to see the sky. From several sources he takes human evolution from creating clearings to have light and ability to see the sky. Subsequently huts, villages, cities, and academies follow. Looks like economics dominate, depredate, and obliterate forests today. What do you think?

On a “lighter” and more local note is a novel published in 1941, The Man Who Went Away by Harold Bell Wright. This novel of intrigue is set in the actual coast and terrain between Bear Harbor and the South Fork Eel River with a new set of place names and barely disguised 1880–1941 history. The reality of the impact of the Bear Harbor Lumber Company and the saga of Henry Neff Anderson and Andersonia are clearly outlined. The author, a favorite of Ronald Reagan, wrote adventure novels set in real topography. This one, with characters woven into reality history and romantic primal forest, ends with Save-the-Redwoods League saving the primal ancient forest—and the man who had returned to make a fortune cutting the forest was transformed and “Went Away.” Most of the story is set in the real topography of Indian Creek that extends from the Usal Road ridge above Bear Harbor and Needle Rock to its confluence with the South Fork Eel River across from “old” Piercy. Most of it is now in drastic recovery mode and part of RFFI’s Usal Redwood Forest and Lost Coast Forestlands. If Harold Bell Wright had lived long enough to write a sequel, published say in 1964 or 2006, the romantic happy ending epiphany of 1941 would be eclipsed by the reality of some of the most thoroughly damaging rounds of logging in the region—even though the recovery is underway and ideally will continue for generations. The area has continued to be, despite all, favored by salmon and steelhead—an essential refugia of coho for recovery of runs in the South Fork Eel River. I’ve been meaning for years to regularly delve into Northwest Mendocino/Southwest Humboldt County perspectives in this column. Might happen.

Below is a set of links that will give you important information to digest and act on. My intention and the space to delve into critical details are somewhat impaired. Next column I’ll try to get in more detail. Past columns have plenty of that detail just waiting for you to be motivated.

One imperative action is to bring overwhelming support for at least a two-year moratorium in Jackson Demonstration State Forest, with independent transparent examination/analysis to make the reforms necessary there and by extension to all of California’s forests—the reality needed for recovery, climate, water, and habitat, with conservation standards for multiple generations of sustaining and positive stewardship.

I strongly recommend (full disclosure, I am on the Board of RFFI) that you check out the video of this year’s September 8th virtual RFFI annual meeting. The RFFI model stresses forest and watershed recovery that engages participation by all the surrounding communities and is strongly presented by Board Chair Kathy Moxon, Head Usal Redwood Forester Linwood Gill, and Conservation Recovery Coordinator Karen Youngblood; with the keynote given by Dr. Frank Lake, outstanding expert Indigenous practitioner and teacher of Traditional Ecological Knowledge. Go to www.rffi.org to connect with the recording of the annual meeting.

Please help out where and when you can. Check out the work and other information for Sanctuary Forest, the Institute for Sustainable Forestry (ISF), EPIC, Forests Forever, Why Forests Matter, and Redwood Forest Foundation, Inc. Thank you, Trees Foundation! – rg

• Cal Fire, timber industry must face an inconvenient truth. We are logging further into the wildfire and climate crisis. Sep. 17, 2021 1:30 a.m. By Evan Mills and John P. O’Brien, https://tinyurl.com/6du8yaes

• A Billion-Dollar Fortune from Timber and Fire, Story by Chloe Sorvino, https://tinyurl.com/3a5rvy9c