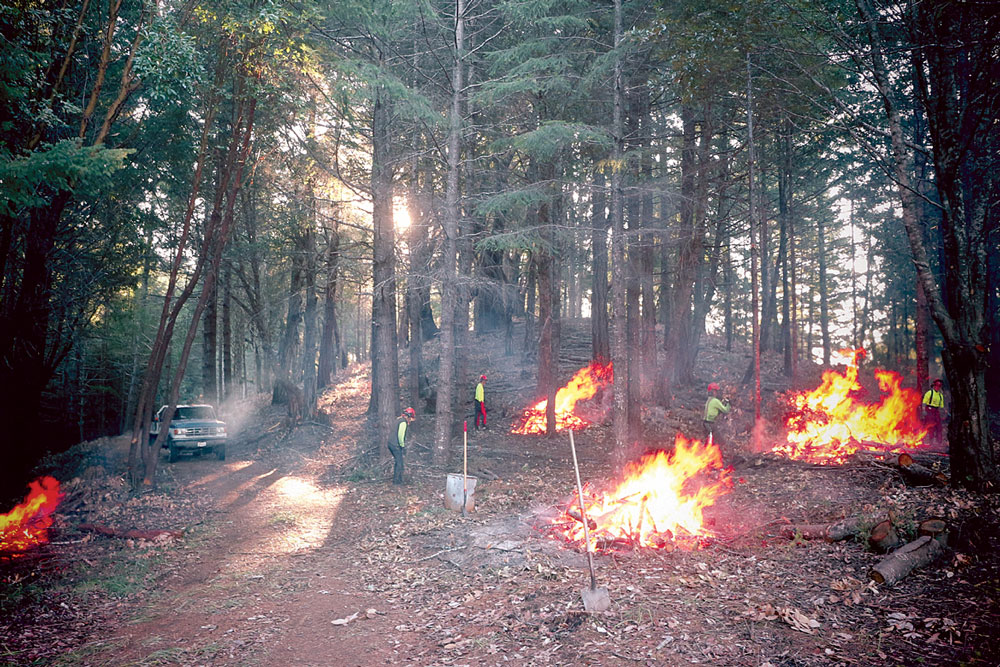 The following is a partial transcript of the “Pathways to Fire Resilience” webinar held on Oct. 3rd in lieu of an in-person Trees Foundation 30th Anniversary event, which was postponed due to COVID-19 concerns. Ali Freedlund was the first presenter, followed by Margo Robbins, Lenya Quinn-Davidson, Tim Bailey, Will Harling, and Cybelle Immitt. To view the full webinar, visit tinyurl.com/pathwaystofireresilience.

Kerry Reynolds: I want to say welcome to everyone who’s here at the Pathways to Fire Resilience panel discussion today. My name’s Kerry, and I’m with Trees Foundation, and we’re thrilled to be hosting this webinar. It’s our 30th anniversary, so this is in lieu of a big in-person celebration, which we’re postponing until it’s safer to gather—we hope this spring. But today, we have a wonderful and important conversation with a lot of very informed folks about fire resiliency and how to make our rural communities more resilient to fire.

I’m going to invite Bill and Gail Eastwood to join me [on the screen] to help welcome you to this panel discussion today. It’s really a delight to see Trees Foundation moving towards expanding our services to the world of fire preparedness. And about this time last year, Tracy Katelman—who used to be a big part of Trees Foundation back in the Headwaters days—reached out to us and asked, “Do you think Trees Foundation should expand to offer the same types of services you offer to grassroots environmental groups in the North Coast to doing that for the fire-preparedness community?” And when she and we all started to look at the expertise on our board alone in this area, it started to become clear that this is really an important direction for us to take, and so that’s what led us to emphasize this today. And Bill and Gail can add to that, of course.

Gail Eastwood: I’m Interim Chair of the Southern Humboldt Fire Safe Council, one of Trees’ new partners. And I’m just really happy to see that Trees Foundation is embracing this world of fire preparedness and fire resiliency. I’ve been steeped in stewardship of the land one way or another for a pretty long time, and it seems to me that fire is a common denominator; it unites everyone. It’s the concern that draws all of us into a deeper awareness that caring for the land is about survival, so thank you, Kerry, and thank you, Trees.

Bill Eastwood: I want to add that this is really, really a very opportune time to be doing what we’re doing, as we all know. I mean, fire is getting to be extremely serious, and we’ve really got to up our involvement on a single-landowner level, and all the way up to agencies. It just has to happen. ‘Cause right now, Nature is just doing it. It’s burning large areas and then it burns contiguous areas. So I’m thrilled by the panel and let’s get on with it.

Ali Freedlund: Hey, everybody. First, I want to say thank you to Trees Foundation for getting this together. It was hard to let go of the in-person event, but this is great, I feel very honored to be a part of this esteemed group of panelists. At the Mattole Restoration Council, we have been seriously collaborating with the Lower Mattole Fire Safe Council for almost 20 years. And another thing that we started in 1992—not the Mattole Restoration Council, but as part of the community—was something called NEST [Neighborhood Emergency Service Team].

So that’s where I’ll start, with getting to know your neighbors, and then I’m going to go on to a great avenue for exploration of building pathways to fire resilience, which is forming Fire Safe Councils or being a part of the Humboldt County Fire Safe Council.

One of the key things in our communities is to support our Volunteer Fire Departments or companies. And another key thing—in order to get the kind of funding support you need to do the implementation on projects, it often requires the building of plans, of prioritizing projects, whether that’s a CWPP, which is a Community Wildfire Protection Plan, or being a designated Firewise community, or now being part of a regional collaboration in order to expand from defensible space and fuel breaks to larger landscape fuels reduction.

So for the Mattole Restoration Council, it became very important to build our capacity, doing the actual work with our crew, and that has taken a long time. When I give you that list, I want to say it’s been 20 years of taking that time to build a lot of capacity. And then we’re able to do the fuels reduction and/or the good fire. So it’s really important to work with all the people in the people pot, whether it’s the funders, the agencies, your landowners, your neighbors. It just becomes a very interactive thing and [it’s important to] not pigeonhole people in being “that person” to try and avoid burnout.

Lastly, these two things kind of go together: it’s critical to reflect on what works in these treatments, on what works in getting together with communities, on being transparent, on noticing what’s happening with your treatments, when species change. What are you aiming for? What are you getting? Because it’s more than just about your people neighbors, it’s about your neighbors as trees, it’s about your neighbors that fly and crawl and are furry….

In 1992 we had a huge earthquake in Petrolia, which took houses off their foundations, and we started something called a Neighborhood Emergency Service Team (NEST). We didn’t make this up, this model was out there, but it really brought the communities of Petrolia and Honeydew together in that, all of a sudden, people understood, “Oh, not everybody knew their neighbor,” or what was happening, or whose foundation was lost, or is everybody alive?

And so we started this NEST [phone tree]. And in the beginning it was very difficult because people didn’t want to share their phone numbers, and now it still can be difficult in some areas. But all of Petrolia is in the NEST list, and there are several pages to this list. Each NEST is a bunch of residences usually along the same road, and some of the larger road networks are broken up into three, sometimes four different NESTs, and each NEST has a representative that in an emergency would report to the volunteer fire companies and/or the NEST coordinator to account for people in an emergency situation, and we’ve used it many times since 1992.

When we formed the Lower Mattole Fire Safe Council, we had a hard time getting all the representatives from all the neighborhoods, and then we thought, “Oh, it could be the same because you don’t do a lot with NEST unless you’re in an emergency.” And so we started advertising that “All NEST representatives, please come to the Lower Mattole Fire Safe Council.” And I’m showing you this photo (Figure 1) just to say this is not all our NESTs, but it does involve CAL FIRE, our volunteer fire companies and/or departments, and it’s a lot of us gray-haired folk that are able to take on that representation and find out where, who our neighbors are, and what the numbers are and where the water tanks are. But don’t feel like you have to shoot for the sky. This is probably a quarter of the NEST reps that are sitting here in this room, and we don’t have a ton of in-person meetings, obviously, right now, but we go forward.

One of the things that we [focus on] is to support our volunteer firefighters or first responders. We are very remote out in Petrolia and Honeydew, and there’s a significant lack of ability to get a signal, as you guys might know in your areas. So we made up these atlases, because you can’t get Google Maps when you’re on an emergency out here….

We started the Mattole fire atlas, and they became these huge 11 x 17 things that were put underneath the seats of the fire engine, and then we realized they were cumbersome. And we went on to update the NEST list by making each NEST into a map, and then going back to the atlas where we are putting all the big information material onto iPads that have GPS tracking on them.

Figure 2 (page 31) shows our GIS coordinator training the firefighters in Ettersburg at the Telegraph Ridge Fire Station, so that they can now take these iPads and know exactly where they are as they go on an emergency. That’s been critical in our involvement of our whole community, to bring on the firefighters.

Building crew capacity, I don’t want to overwhelm people, but I think it’s really important in every area to build crew capacity, and this has taken us 20 years. We have all the chainsaws and the personnel and the chippers, the SOD (Sudden Oak Death) washer and the trailer, and the log splitter, and this and that, and an equipment shed and a crew truck, and it has been incredibly important.

But you start with your personnel. You just start building a crew and the rest should follow, and I know in some areas that has been a challenging aspect to get the labor, but I want to say it’s going to get less challenging.

So we started out doing a lot of defensible-space projects, and then we moved on to roadside fuel breaks, and then we moved on to shaded fuel breaks on people’s private lands. Figure 3 shows a private ranch, where we have predominantly been using good fire in burn piles. However, we are hoping to do more prescribed fire with the Humboldt County Prescribed Burn Association—it’s an important and incredible way to build resilience. We’re talking about these pathways to fire resilience, and we just have to put fire back on the land, and we have to reduce those fuels in some way.

Figures 4 and 5 is a before and after of a location on one of our fuel breaks. We’ve had the good fortune of being able to work in really incredibly beautiful places, a lot of incredibly beautiful, wild ridge lines. But because of the absence of fire, they still need treatment. And so you can see that there was a lot of thinning done and we also burned the material.

I just want to say, it’s about place. You don’t necessarily want to shoot for trees 15 feet apart and the exact park-like looking thing; you want to go, “Okay, what do you want? Do you want to retain the oaks? Do you want to release the madrones? What do you want here? Are you trying to reclaim your grasses?” Those sorts of things are the questions that we really need to address moving into those larger landscape fuel breaks or forest health treatments.

And so it’s been an honor. I feel like as we go forward, we are reconnecting with the web of life, where we can nurture a native diversity, where if one part gets a little shriveled by fire, we can reconnect it again, so long as we keep a mosaic in mind. Oak woodlands, meadows, swales, deep forests are all part of the place we live. Some parts harbor little birds and lizards and other parts harbor deer and bear and birds of prey. Best part is for each of us to be in service to it all.