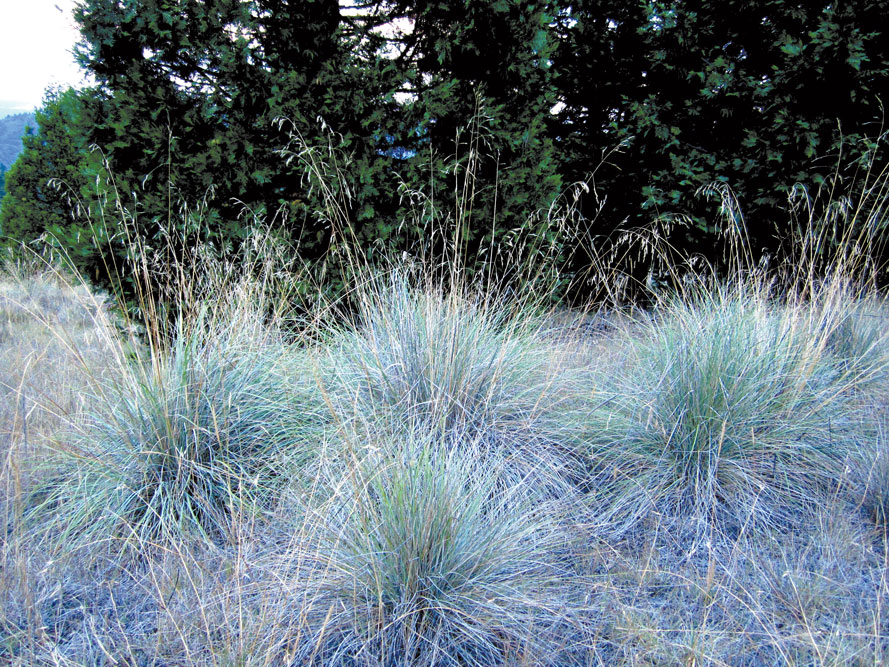 Of the more than 300 grasses that are native to the state, California fescue is among the most beautiful. With its gray-green leaves, it is a bright spot in shady woodlands. A perennial bunchgrass, it forms dense, arching clumps about two feet tall, and in late spring it sends up flower spikes up to four feet tall. Flower spikes are loose and open, starting out the same gray-green as the leaves and maturing to a lovely soft tan color.

California fescue often grows on north-facing slopes, preferring the partial shade this aspect provides. It also likes to grow in the shade of trees, particularly deciduous oaks, where it forms dense stands interspersed with native bulbs, such as brodiaea. It is interesting to notice that when growing as an understory plant beneath oaks, California fescue stops growing right at the tree’s dripline, where the grass component changes, usually to weedy non-native annual grasses. Grasslands, chaparral, and serpentine habitats are other places where you can find California fescue.

A wildlife superplant, California fescue hosts at least eight species of moths and butterflies. Kyle Keegan, Permaculture and wildlife expert, says, “Of all the North Coast grass species, California fescue may provide the highest value of habitat for wildlife, mostly due to the massive size that they can attain. California Quail, Dark-Eyed Juncos, Spotted Towhees, Wild Turkeys, and other ground-nesting species commonly use mature plants for nesting cover. Oak woodland reptiles like Alligator Lizards and Ring-necked Snakes will overwinter in rodent burrows at the base of California fescue safely protected from temperature extremes due to the dense thatch the grass provides. Coyotes are often seen hunting colonies of California fescue knowing that they harbor populations of Voles and other rodents. And the plants produce large quantities of seed most years, feeding rodents, birds and even harvester ants.”

California fescue has deep roots, which sequester carbon. It can resprout after a fire, due to a thick buildup of thatch that protects the roots.

In the home landscape, this evergreen grass makes a beautiful specimen in planting beds. It also looks fantastic planted in mass under trees and needs no water once established.

California fescue occurs in the Coast Ranges from southwestern Oregon to San Luis Obispo County, the Cascade Range, and the north and central Sierra Nevada. There is a variety that occurs in the San Bernardino Mountains of southern California. The scientific name is Festuca californica and it is in the grass family, Poaceae.