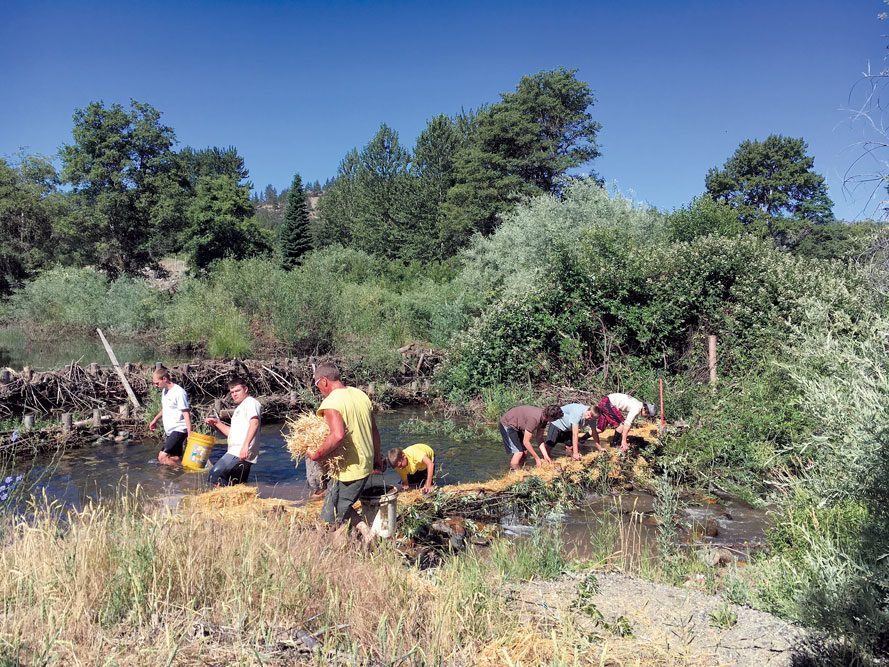 When I moved to the Mattole watershed nearly a decade ago, my new neighbor gave me my first lesson in wood loading. Which is to say, he gently schooled me for foraging firewood from the river bar. He explained how woody debris remaining in the river is critical for creating fish habitat, and offered a truncated history of channel-clearing by well-intentioned (and it must be said well-informed at the time) restorationists dedicated to reviving salmon populations in the Mattole and Eel watersheds by ensuring their successful upstream passage. This, unfortunately, delivered some unintended consequences. As large quantities of wood were removed from streams, channel incision increased, flood plains disconnected, and habitat diversity—particularly salmonid rearing habitat—was lost.

I respected my neighbor’s knowledge and direction, even if I didn’t fully comprehend the complexity of our local ecology or restoration work (or my place in either), and I foraged wood with a saw from the forest instead. But even there, a trepidation shadowed my movement. An important lesson had been revealed: Whose habitat am I disturbing? A conflict over when or how to alter or intervene, and when to “let Nature do her thing” played out on a scale the size of my own footprint. I’ve since realized that I’m not alone in that fraught space between do-nothing and do-everything. Certainly structures as large as the Klamath dams, and even smaller man-made impediments (improperly sized culverts, for example) are restricting fish passage to their historic reaches. So why wouldn’t fallen redwoods be impediments, too?

There is a consensus rising that not all obstructions are detrimental to anadromous fish. As the massive dams on the Klamath are back on track to be removed (see page 9), hundreds of smaller in-stream structures are being installed throughout Northern California’s watersheds, restoring the complexity of stream channels, improving and diversifying habitat for fish and other wildlife. I reached out to Charnna Gilmore, Executive Director of Scott River Watershed Council, to better understand the nuances of these planned restorative obstructions. She explains, “coho salmon evolved in slow water, floodplain habitats (e.g. beaver ponds, inset floodplains). Creation of slow-water habitats is essentially missing within the Scott due to past anthropogenic impacts, so the BDAs (beaver dam analogues) basically are mimicking the effects beaver had on the system prior to the watershed’s significant changes.”

Whether or not beaver historically populated every reach where salmon run (and there is some debate about this), Charnna points out that, “Using wood within the stream system does several things. It slows the water, increasing its residence time, sinking it into the adjacent groundwater aquifer, allowing water to be released later in the season. It also forces water to access floodplains in higher flows (if not too incised), which is important for juvenile coho salmon to overwinter in systems like the Scott. Additionally, complexity within the stream channel helps create micro habitats that support different life stages such as pools and spawning gravel sorting.”

Tasha McKee, Water Program Director at Sanctuary Forest, has been working for several years with Charnna and Sam Flanagan, a geologist with U.S. Bureau of Land Management’s Arcata Field Office, on implementing a beaver dam analogue (BDA) pilot project in Lost River, a high-priority tributary to the Mattole. When Tasha was first exploring BDAs as a habitat and flow enhancement strategy, Chris Maser, a Corvallis research scientist and prolific author, gave her some simple, yet sage, advice: Build it to beaver-scale. We know how that scale works in nature.

Sam Flanagan concurs, “A project should replicate the natural function of wood in rivers. Wood behaves very differently depending on the size of the river. Scale is super important.”

Fortunately for our rivers, storms will come, and maybe fire. Trees will fall. Why not let natural processes lead?

In the case of restoring what Sam calls the “ping pong” effect of meandering streams, in which there is sufficient complexity and slow-moving water to shelter juvenile salmon, intervention is sometimes necessary. “I think the engineering approach has its place, the low-tech approach (felling trees somewhat randomly into the streambed) has its place, and ‘let it do its thing’ has its place. In a lot of areas we’ve lost so much historic habitat, and fish populations have plummeted, so we really needed to get in there and do something. In the upper Mattole, we’ve lost much of the natural process elements—we’ve lost the really large, really old trees that would fall into the streams. We might have to help that along.”

That urgency reverberates. “When working in systems like the Scott (a tributary to the Klamath) that have undergone such massive changes (e.g. removal of beaver, channelization, levee construction, invasive plants such as Himalaya blackberries, etc.), adaptive management has to become part of our design, planning, permitting, and funding,” Charnna points out. “Basically, we need to recognize that a relationship is established when working in stream systems, and like any good relationship it requires time, attention, understanding, and adaptability. Building something and walking away is just not an option. We live in a managed watershed and therefore management is essential. We need to work with our systems and restoration activities in ways that harmoniously move towards natural processes.”

When I asked Charnna what blind spots she foresees in the restoration of a post-dam Klamath watershed, her response struck a clear tone. “Climate change. I don’t mean to sound like the dams remaining in place would be a better option because it would absolutely not be the case. Like everything, climate change is about ready to really start kicking our ass, and so the timing of the dam removal and potential benefits may get diluted by the rapidly changing and drying climate.”

The infeasibility of a hands-off approach has also become alarmingly clear to Tasha as she monitors Sanctuary Forest’s streamflow enhancement projects: “Last year (2020) was extreme. It was the longest, driest, hottest summer we’ve had [since flow enhancement projects began]. Still, things looked good until August. Our projects are helping summer flows.” A recent Basis of Design report completed by Stillwater Sciences for the Lost River Flow Enhancement Project states, “The greatest benefit we observe in extreme drought years from these projects is an increase in pool volume and pools persisting later into the season when there is only a trickle of flow at the upstream end of the project.” (Joel Monschke, September 2020)

“But below 10gpm,” Tasha notes, “the pools start shrinking. They can’t persist without inflow. We need sufficient late-season rain, upslope ponds equipped to provide metered flow during late summer and fall, or upslope groundwater projects in addition to the instream structures.” With climate change exacerbating the effects of our past land-use practices while speeding up the clock, the salmon don’t have time to wait for a natural recalibration.

With so much riding on human intervention, I couldn’t help but wonder if we’re headed for a familiar point on a circular path. How can we avoid the same unintentional impacts of simply not knowing everything about how an ecosystem functions? “I think that we do need to acknowledge that [engineered obstructions] can be a problem for fish and are a problem in some places,” says Sam Flanagan, “we need to be very cognizant of that and monitor what we do, watch what we do, and learn from what we do to make sure we’re not leaving a trail of barriers. We need to follow up and learn from what we’ve done… staying connected to the project matters.”

Stay connected to what we do. Another important lesson, revealed.