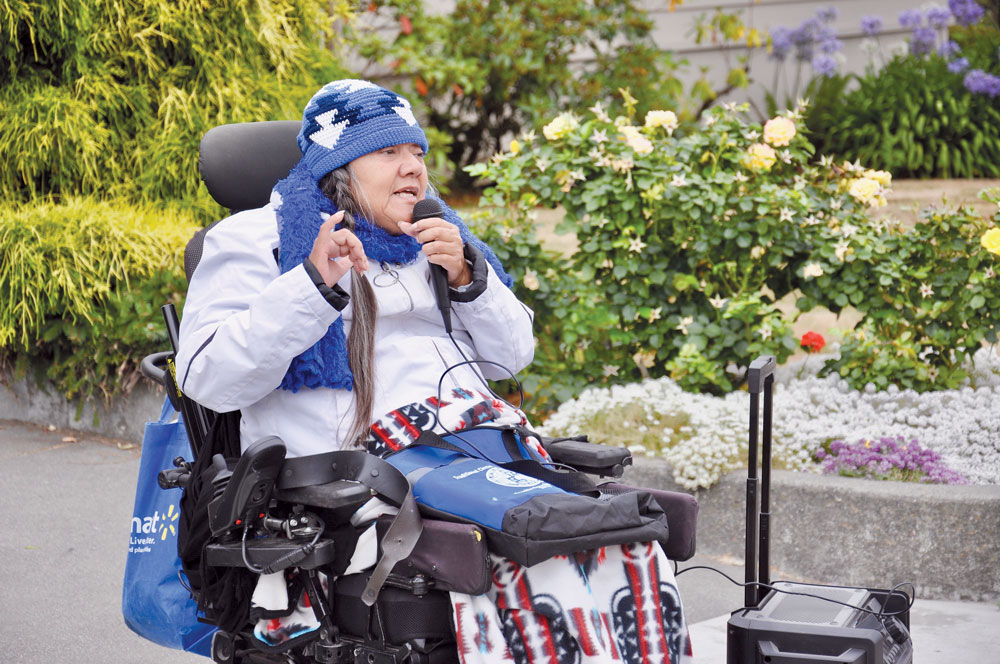 Jene McCovey speaking at a rally for the Mattole forests at HRC headquarters in Scotia in 2018. photo by Karen Pickett

Yurok elder Jene McCovey (August 11, 1951—February 8, 2021) will be greatly missed on the North Coast as a dedicated and inspiring environmental leader. In 2014, Jene was presented with the Circle of Courage award by the Women’s Intercultural Network, and in 2018 she was chosen for the Sempervirens Lifetime Achievement Award by the Environmental Protection and Information Center. Our Partners share these memories of her.

Karen Pickett, Bay Area Coalition for Headwaters and Earth First!
Thank you, Jene, for being with us all this time.

Jene McCovey was a force of nature who brought her wise strategy, focused participation, prayers, and songs to so many events across the landscape of ecological activism—public hearings, agency meetings, demonstrations, rallies, strategy sessions, skill-sharing workshops, organizational gatherings—Jene was up for all of it. She was always there.She even showed up at demonstrations out in the forest, treating her motorized wheelchair like a high-end off-road vehicle. She was fearless. A couple years ago, Jene showed up at the national Earth First! Round River Rendezvous that was taking place in Northern California. I walked with her as she navigated her wheelchair over extremely bumpy, rocky, sloped ground to an area under the oak trees to give one of several workshops she came to offer. She didn’t slow down for a minute.

She gave rise to many grassroots groups to organize on campaigns, including “Native American Coalition for Headwaters” during the height of the Headwaters Forest campaign, in an instant bringing valuable diversity to that decades-long forest campaign.

Jene was a key player; she was a constant presence; she was a giver. She was a friend and an ally. Much gratitude, Jene.

Darryl Cherney, Environmentally Sound Promotions
Jene McCovey was more than an activist, she was a friend. She would be there for those, including myself, who needed her, even though she herself had great needs. She bridged the Indigenous peoples with the rest of us with blessings, songs, and humor. She was a protector of Mother Earth and all her inhabitants who will now sing her songs for her.

Amber Jamieson, Environmental Protection and Information Center
Jene McCovey was an unwavering activist for Indigenous rights, environmental protection, and social justice issues. Despite her physical confinement to a wheelchair, she always made it to rallies, protests, and community events to advocate for important causes. Her activism began in her early twenties, and it never stopped. She helped secure protections for native communities that were being sprayed by logging companies with toxic herbicides, she participated in the Save the Redwoods campaign, advocated for protection of Dillon Creek where sacred sites were at risk of logging, fought for Klamath Dam removal, protested radioactive contamination from nuclear waste, spoke out against Navy sonar testing, and showed up to speak at public meetings for countless other issues that would impact the places we live and love.

Wherever there was a threat, Jene was right there in the forefront, supporting, speaking, and representing people, places, and wildlife to make our community and the world a better, more conscientious place. We are grateful for the time we shared with Jene and know her legacy will live on through the inspiration that she gave to all of us she touched with her words, compassion, and tenacity.

Susan Nolan, Institute for Sustainable Forestry
During the campaign to support the Thompson Wilderness bill (passed Congress in 2006), the California Wilderness Coalition built public support by sponsoring public hikes into the proposed new protected areas. One of them went to Cahto, near Laytonville. Jene heard about it and wanted to go. Of course she loved the outdoors, and the place being named for the local tribe must have been an added pull.

The main access into the area is an old road, wide and fairly level. Jene arrived in a van, lowered her chair to the ground, and off we went. Four-wheeling down the old dirt road, Jene kept up with the group, taking it all in, and seemed to really enjoy herself.

Jerry Martien, Friends of Elk River
I last saw Jene at a small prayer ceremony beside Elk River where it empties into the Bay. About a dozen people had gathered to honor a dream. Down in Mendocino a woman had dreamt that the forest was all cut down. And then she saw a group of people carrying a small redwood log, almost like a coffin. It had to be carried all the way to the northern end of Cascadia—only that could save the forest. Then some of her Pomo friends said the dream should be acted on.

It sounded like a crazy idea, but hey: nothing else has slowed the extinction logging of Elk River’s forests. Maybe a blessing would help. I had to admit it was a visionary act. The log was carried over the coast range, up the Eel, over to the Mattole, to Ferndale by the Wildcat Road, stopping for prayer and ceremony along the way. Jene had traveled part of the way in her wheelchair. As always, she had the right words to say when we gathered beside the river.

Last I heard, the log was still making its way north.

Of those wheels she made wings.
Of her words
blessings we still live with.

← Tipping the Scale: With Large Dams Coming Down, Small Ones are Going Up to Restore Balance in Impacted WatershedsFrom Roy’s Dam to Roy’s Riffles: Removing the Top-Priority Barrier for Central California Coho Salmon →