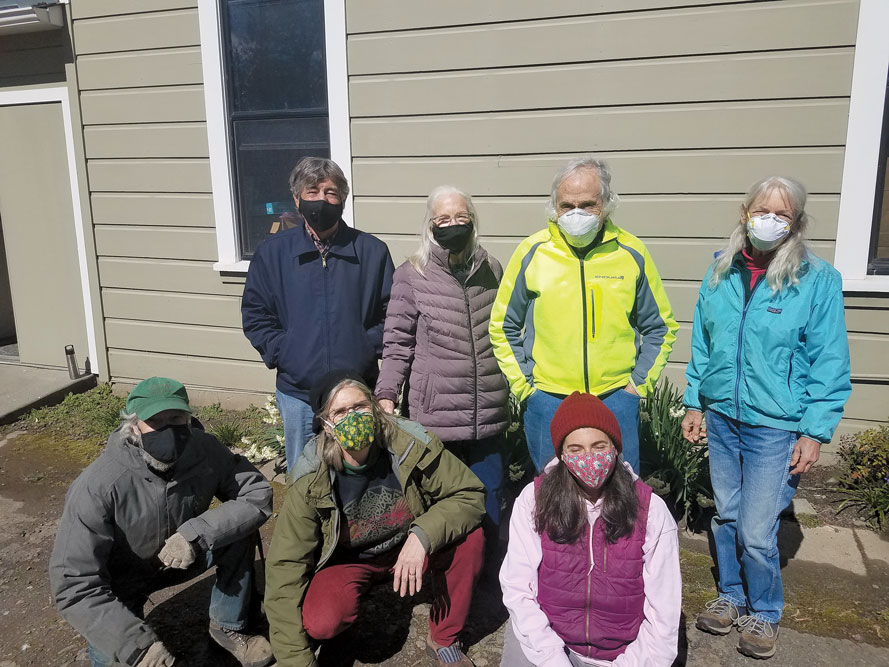 When did Willits Environmental Center get its start?

The Willits Environmental Center started in the 1990s in the wake of a community effort to get the Willits City Council to reject a proposal for a wood-fired power plant in the community. The concerns had to do with over-cutting of trees to fuel this plant, and air pollution because Willits is a valley, and the smoke would collect in the valley and cause air quality [issues]. That effort [of resistance] was ultimately successful. But those of us who worked on that effort thought, “We want to be ready for the next bad thing that shows up in Willits. We want to have some kind of organization in place so that we don’t have to start from ground zero to fight a bad project.” We also wanted to do good projects, of course. We wanted to have a physical presence in the town so that if developers came through, they could see there was an environmental center in the town….

And then they would just drive on through. (laughter)

Yes, this was before the bypass [when traffic passed through the center of town].

I also want to say that David and I, when we came to Mendocino County back in the seventies (well, for David, it was the early seventies; for me, the mid-seventies), we pretty quickly, by separate means, became involved in an effort to protect potential wilderness areas on the Mendocino National Forest.

Back in the seventies, the Forest Service and the Bureau of Land Management were doing an inventory of all their roadless lands to determine which ones would be reasonable candidates for wilderness protection under the Federal Wilderness Act and which ones were basically available for logging. David’s neighbor (who ended up being my neighbor as well) was about 30 years older than we were. He knew these areas of Mendocino National Forest quite well, and he helped gather people together and formed an organization called
the Citizen’s Committee to Save Our Public Lands.

So by the mid-seventies, David and I were active members of that group, and we worked for 10 years to inventory and advocate for wilderness protection for areas on the Mendocino National Forest. We also, in the course of it, joined forces with people from Humboldt County and Trinity County, and in 1984 we were successful in helping to pass the California Wilderness Act, signed into law by Ronald Reagan.

So that 10 years was [our] proving grounds for environmental work, and we learned all kinds of stuff. We took forestry classes, we met people from Humboldt County and Trinity County, and formed these bonds with people all over the region and then had this successful outcome 10 years later. So that was quite a motivating experience for us to stay involved in environmental issues. That’s where we learned the politics of it and the science of it. It was quite an important period for David and me.

I know the Willits Bypass was a very long and difficult struggle that Willits Environmental Center was involved in.

Yes, it was. We assembled a team of people, and we went head to head with Caltrans. We ended up having a meeting with the head of Caltrans in Sacramento at the time. Ultimately, though the bypass was built, Caltrans had wanted to build a four-lane bypass. And as a result of our work and education of Caltrans—especially the head of Caltrans at that time—we did help ensure that Caltrans only got enough money to build the two lanes that, if you drive through, you drive on. [Two lanes] was obviously plenty of highway capacity to do the job—actually, more than what was needed.

But in addition to that, [a result] which we are increasingly becoming proud of, was that Little Lake Valley—through which the bypass goes—is a seasonal wetland, and wetlands at least during that period of time had a lot of protections; they still have a lot of protections. Caltrans had to mitigate for the destruction of wetlands that the highway caused. We worked tirelessly with all of these agencies—the state and federal environmental regulatory agencies, the Army Corps of Engineers, the U.S. Fish and Wildlife Service, State Fish and Wildlife, the EPA, the regional Water Board. We worked with all of them and convinced them that the size of the project Caltrans wanted to do was excessively destructive.

What ended up happening was Caltrans was forced to purchase 2,000 acres of land in the Willits Valley and the nearby surrounding hillsides to mitigate for all the damage they were doing. And we take some credit for that because it turned out to be the largest mitigation that Caltrans ever had to do in its history.

At this point, that 2,000 acres is being managed by the Mendocino County Resource Conservation District, and there’s a lot of work being done to improve the seasonal wetlands, and those results are very positive. Lots of animals are coming into the valley that weren’t there before. The elk are coming in there, and there’s beaver that are entering the valley that probably haven’t been there for more than 100 years. So it’s starting to transform itself into the amazingly rich ecosystem that a wetland can be.

The [Willits Bypass] project started almost simultaneously with the founding of the Willits Environmental Center. Our first Caltrans meeting on the project was actually in 1989/90. So it basically spanned the whole of our existence up until about 2014 or something, when it was completed.

What has Willits Environmental Center worked on more recently?

When cannabis became legalized, we collaborated with lots of other groups, including some of the more progressive cannabis growers, and with the county to deal with the new legal landscape. We worked with the county to help put together an ordinance where there were some protections in place for the fragile landscape…For reasons that are not exactly clear to us, as the years have gone by since legalization kicked off, Mendocino County’s regulatory process has fallen into chaos.

We have a planning and building department that never embraced our ordinance, which was protective of the small grower and kept new grows from expanding into rangelands—which in Mendocino County are bone-dry and fragile. So we have an ordinance that had some pretty darn good environmental protections in it. But the enforcement wing of our planning department never embraced the ordinance, and willfully ignored it. All kinds of crazy things happened and continue to happen, and now the whole thing is in disarray. So we’ve been attempting to expose what happened and attempting to save the environmental protections of the ordinance. It’s been one of the most frustrating and difficult tasks that we’ve encountered. It’s gone on for three years now, and we’re still in the midst of it.

As we go to press, the Mendocino County Board of Supervisors just received a final recommendation from the County’s Planning Commission to pass the controversial Phase 3 Cannabis Cultivation ordinance with some amendments. The ordinance is now on the April 20 Board of Supervisor’s agenda, and WEC, along with numerous other community organizations, continues to oppose it.