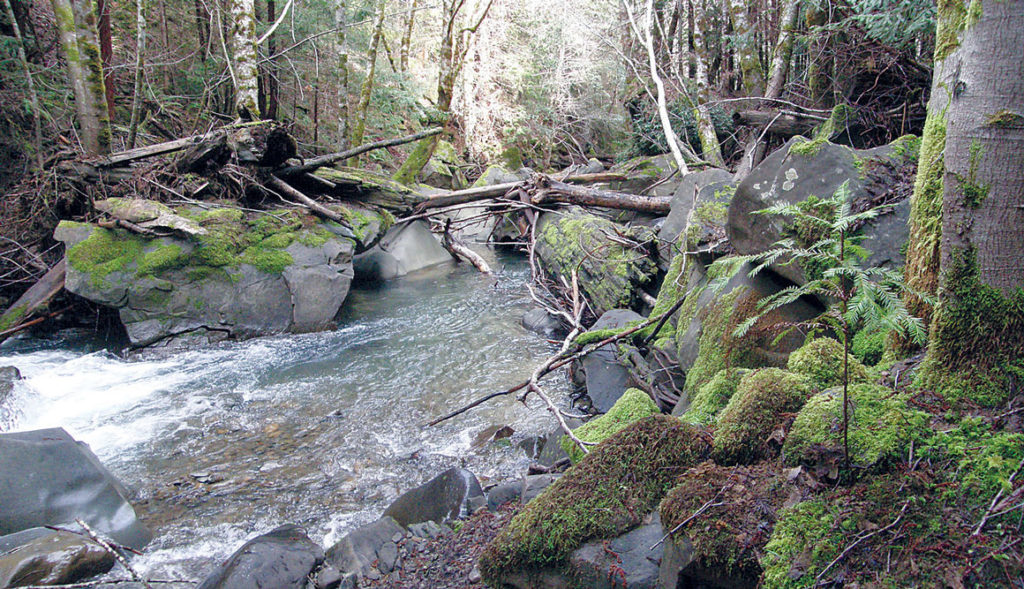 Sort of getting claustrophobic, whether it’s North Coast, West Coast, Western Hemisphere, or the World.

I just reread “Diggin’ In #65” (F&R News, Winter 2020/21). Hecka lot of information there. Don’t know how I managed that, and now there’s even more to consider and navigate. I should start with younger times when I was engaged and enthused with the world within a 15-mile radius. OK, more than that, but that perspective was direct and close and meaningfully shared with friends and family, and that time of my life started in 1971.

Concurrent with getting a grip on homesteading, raising a family, and keeping a succession of building gigs together was exploration/contemplation. The Mattole (mainly from Eubanks Creek to Four Corners), the coast (mainly from Whale Gulch to Usal), and the South Fork Eel (mainly the Indian Creek tributary) were the “stomping grounds.”

What was seen and contemplated, and then augmented/confirmed by reading and personal contacts, was a landscape that had been almost entirely stripped of its forests, with massive hydrological disruption and erosion—and where were the people that carried out the main damage, and the people there prior? What could people do now to rectify that situation? I’ll try to recount some of the things that were done, and are being done—with most of what needs to be discussed deferred to multiple future columns.

By the 1970s, it was broadly obvious in California, the Pacific Northwest, and other places that volunteer efforts could not cope with correcting the damage, and we were enabled by legislative and bond funding to create what became known in some quarters as a restoration industry/economy. It has been an interesting effort with many ups and downs, with constant stress and disconnects, although very positive outcomes emerge now and then to keep dedication and involvement alive.

Out of the thousands of examples that could be used, I’ll give a handful. ‘Back-in-the-day,’ on a local scale, the Center for Manpower Resources out of Ukiah, in conjunction with Coastal Headwaters Association from Whale Gulch, conducted stream and watershed surveys to examine a large area of the “stomping grounds” for barriers to salmon and steelhead spawning migrations. In 1979–80 a logging- and flood-induced, 100-yard-long, 15-foot-high log jam blockage was removed by hand for about $12/hour, and easy passage was restored in Anderson Creek, allowing the most productive tributary of Indian Creek to thrive. In 1983 Coastal Headwaters took on stabilizing 12 critical bank-erosion sites in the salmonid refugia headwaters of the Mattole, mainly with hand placement of rock. All sites are still in place, a $50,000 project funded with vision by the California State Coastal Conservancy.

Starting in 2007, a project with six phases completed in 2017 was done in Standley Creek Watershed by a partnership of Campbell Global, then Redwood Forest Foundation Inc. (RFFI), and Usal Redwood Forest, along with Pacific Watershed Associates, Trout Unlimited, the California Conservation Corps, Eel River Watershed Improvement Group (ERWIG), and others. This mostly focused on “bad” road and landing removal with important upgrades on the roads that were retained. Costs were between 2 and 3 million dollars, mostly from the California Department of Fish & Wildlife, with some significant costshare by the landowners. Standley Creek is a key salmonid stream tributary to the South Fork Eel, across the river and west of Piercy.

This same area is the focus of a new proposal this year. A comprehensive planning project with action deliverables was submitted in February 2021 to the Fisheries Restoration Grants Program for the Standley Creek Watershed by Trout Unlimited. Most of the partners above will be involved pending funding. It addresses hydrology, habitat, silviculture, geology, and fire that fits into RFFI’s emphasis on water, climate, carbon, habitat, and community. It is an approach with prescriptive outcomes that can be broadly applicable to forested planning watersheds. The proposal is for close to $800,000.

What I really wanted to get to, past a timeline of restoration examples, is the tenuousness of long-term connections of human communities to land that includes respect and care within and extending to neighboring human communities and the land, water, and life that support all. Pretty naïve, ehh?—given the “territorial imperatives” modernized with feudal industrial manifest monetization competition destruction. John Trudell’s repeated references to predator-man always struck a chord. And we’ve just been through four years of predator-man instigation as if professional wrestling-style winners are real.

Now I guess I’ll try and throw a whole bunch of real things at you at once:

• Klamath Dams Removal. Grassroots activists showed up in strength onthe October day of action responding to the Federal Energy Regulation Commission’s (FERC’s) August ruling jeopardizing removal of the dams (see page 16). The order that Pacific Corp had to remain co-owner of the dams through their removal threw the hard-won agreement into doubt. The drama leading to a deal that had Oregon and California taking Pacific Corp’s place with Berkshire Hathaway Energy/Warren Buffet’s full support for the removal of the dams is magical. You should find the YouTube recording of the press conference announcing the deal AND read the beautiful article by Thadeus Greenson (see page 9). Synergy: activists blocking the jetboat tour of principal parties for 15 minutes giving stern lectures, a sample of the toxic algae above the dams, and demonstrating full commitment to dam removal presented a threshold moment. Removal is slated to begin in 2023.

A Billion Dollars for 2021–22 Climate Change Wildfire and Forest Resilience Action Plan. See Richard A. Wilson and “Why Forests Matter,” February 9, 2021, “Initial Comments on Governor’s Budget Summary …” at www.whyforestsmatter.org/thought-leadership/climatechangebudget. Lots of money for certain things, but still no long-term standards and incentives for recovery of California’s forests.

• Search “Mendocino Trail Stewards” and find their top-grade website with their new video, photos, articles, interactive maps, THPs, guidance, and inspiration. The Stewards have been avidly using the trail systems in Jackson Demonstration State Forest (JDSF) for years and became greatly alarmed when multiple Timber Harvest Plans were submitted and some approved in or adjacent to the west side of Jackson, close and parallel to Highway 1 (see page 26). They are driving hard to have 20,000 westside acres of Jackson’s 50,000 be set aside as a park. What’s ironic is their motivation in large part is that the THPs seem to be targeting the larger Redwoods that are almost completely missing in most of the commercial timberland in Mendocino County. It’s a cultural fight of many dimensions. A number of perspectives pertain.

Two of several venues in which policies have been proposed and/or implemented regarding forests are the Board of Forestry (BoF since 1973) and the Forest Management Task Force (FMTF since 2018). Books have and could be written that apply. A major policy context is the last several years of high-impact catastrophic fires. Another is the reduction of forests by cutting as soon as they are commercially viable: 6 to 16 inches in diameter now, and lucky to reach 50 years of age. The JDSF is the exception that proves the rule—deferred gratification starting in the later 1940s has enabled JDSF to have quality forests with 2 to 3 times the volume of current commercial holdings. It has been held up as a model for California, not only for larger older trees, but also for fisheries, wildlife, science, education, and variety of public use. It looks like CalFire is pushing to knock that notion down.

A highly placed CalFire official has referred to Jackson’s atypical large trees as an “interesting luxury” and also, given CalFire’s essential and massive role in fighting fires and responding to emergencies, has indicated that he feels that CalFire has social license to do anything that they want, and don’t have to waste time arguing with the public over forest management.

The Mendocino Trail Stewards’ proposal brings to bear not only examination of the stewardship of JDSF, but the stewardship of all of California’s forests. Some folks in Oregon have pointed out, on the heels of last summer’s fires, that “timber wars” now are not just over old growth, but over the whole forest. The Stewards are seeking a moratorium on cutting in the forest in contention until there is a full understanding of crucial facts and adequate responses—given the whole range of current circumstances, including actions for climate, carbon sequestration, water, drought, and habitat. Support from many groups such as EPIC and Forests Forever is growing every day, and includes the Coyote Valley Pomo Tribe.

• This spawning season’s Chinook runs have been dismal, not only for the Mattole, Eel, Klamath, and Sacramento but the whole West Coast. There were some bright spots for returning coho in parts of the South Fork Eel system in mid-January. A number of live and coho carcasses were spotted in the Mattole, in contrast to some recent years when no live coho or carcasses were seen, although low numbers of juveniles were present during Spring and Summer surveys. Adverse ocean conditions are thought to be a huge factor for low returns, as well as one of the poorest Dungeness crab seasons in memory.

• The controversial plans for large pond water storage for release during the summer months in Briceland’s Redwood Creek remain in contention. Some possibly viable alternatives with smaller, dispersed, and gravity-fed pond locations are being evaluated. Go to SRF’s website for information.

• Distress over huge and/or out-of-control large marijuana farms, existing or proposed, is raging in Humboldt and Mendocino counties. For information pay attention to the exhaustive coverage in almost all media outlets, social or otherwise, all the time.

• I recently read a chapter from an informative forest-issues book (Chapter 3, authored by Jeff Romm, in Justice and Natural Resources 2002, edited by Kathryn Mutz). With a large number of citations and references, the chapter examines dominant forest/conservation and control practices and the general exclusion of non-white participants on multiple levels. An example that struck me is that there are three admitted varieties of participants, falling under the following informal categories: the John Muir preservation adherents (I was somewhat shocked several years ago to hear Muir characterized as a racist), the Timber Baron faction (still true today), and the Gifford Pinchot fans with government-defined “conservation” measures. Actual adherents of community-based equity and multi-generational land connections and quality sustainability aren’t taken seriously and/or are not present where the three dominant factions do the kabuki. (Dictionary says the word originally was a Japanese verb meaning “act dissolutely” and now, as a noun, it refers to a form of traditional Japanese drama with “highly stylized song, mime, and dance, now performed only by male actors, using exaggerated gestures and body movements to express emotions, and including historical plays, domestic dramas, and dance pieces.” Couldn’t resist getting that in.)

• The Lost Coast League continues to be engaged in Rainbow Ridge/Forest Stewardship Certification/Grievance/Appeal Kabuki. Seems that the related certification entities are dedicated to being a firewall between their clients (the certified) and the public trying to ensure that the spirit and requirements of certified stewardship are honored. Horrors, a THP looks more transparent and a communication bridge process at this moment. Rainbow Ridge is one of the most inspiring and important remnant coastal forests in California and the Pacific Northwest.

• We have recently lost two amazing human beings, Jene McCovey and Paul Encimer. See page 38 for remembrances of Jene. Joshua Golden wrote a great tribute to Paul Encimer, read that at  kymkemp.com/2021/01/26/getting-to-know-paul-encimer/. As Joshua wrote “. . . Paul will be missed by many and the greatest tribute to him will be to continue his daily commitment and advocacy for peace, justice, and cooperation into the next generation.”

Please help out where and when you can. Check out the work and other information from Salmonid Restoration Federation (SRF), Sanctuary Forest, the Institute for Sustainable Forestry (ISF), EPIC, WFM, Forests Forever, and others—rg