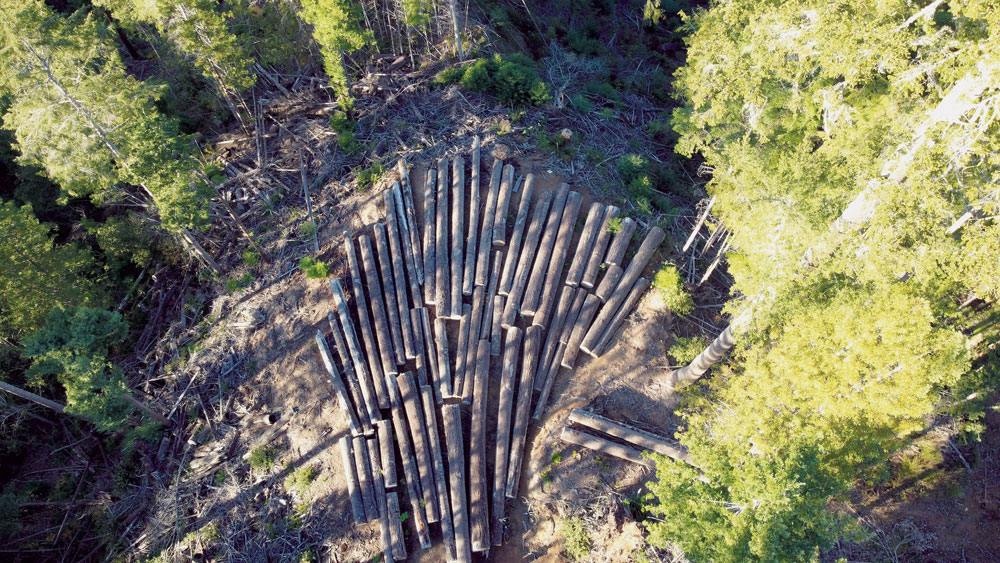 Sixty to one hundred-year-old Douglas-fir, culled and left to rot as part of the 2018 Porter THP. Drone photo by Chet Jamgochian

Jackson Demonstration State Forest—the name is a mouthful. JDSF is quicker, but rather clunky and inelegant. Those of us who love this place mostly say “Jackson,” unaware of the history of Jacob Green Jackson, the Vermont transplant who bought a mill at the mouth of Caspar Creek in 1864 with some adjacent timberland thrown into the deal for good measure. He bought more, and kept on buying, then incorporated his expanding holdings as the “Caspar Lumber Company” in 1880, initiating a sixty-year period of wholesale industrial logging. An eons-old ecosystem—along with the homeland of the Northern Pomo people who had been lovingly stewarding and coexisting with these groves—was nearly destroyed; only massive stumps and a few relic groves remained. In the process, Jacob Green became a very rich man and one of the largest lumber dealers in the state.

By 1947 though, Jacob Green had passed away, the vast majority of the old growth was gone, and Caspar Lumber couldn’t (or wouldn’t) pay its tax bills. It sold the cut-over 48,652 acres to the State of California with the stipulation that they continue as timber lands in perpetuity. Logging continued, but not nearly at the same pace. For one, there weren’t so many valuable trees left. But more importantly, Jackson was now a demonstration forest being managed by professional foresters for silviculture research and what was then considered sustainable logging practices.

Now, 73 years later, areas of the forest are recovering. True old growth status, with all its elusive biological diversity and cathedral-like grandeur—its carpet of topsoil in the canopy, its bat-flanges and its many species that never descend to the ground—is many hundreds of years off.

However, areas that have had no harvest entry since the 1920s are achieving second growth characteristics, showing the little studied but astounding potential Sequoia sempervirens (coast redwood) has for bouncing back. The wonderfully named Fritz Wonder Plot, on State Park land near Big River, has some of the tallest second growth in the world and is accumulating biomass at a rate few ever expected. Data gathered in Humboldt has shown that this phenomenal rate of growth translates to the most carbon sequestered by any species in the world, and that the bigger and older a redwood is, the more it sequesters—at least for the first 1,500 years of its life.

Unfortunately, CalFire continues to treat this gem of a forest as commercial timberland, with ten square miles of the oldest remaining groves slated for cut in the next 7 years. Language contained in the timber harvest plan process, coupled with the managers’ own arrogance, has led them to believe that they are the landowners, not the caretakers of a precious and unique ecosystem ‘owned’ by the people of California.

This must change, and we hope you will join us in taking action. You can help us raise funds and have fun by joining the Trail-A-Thon challenge happening for the whole month of May, where participants can win prizes by biking, swimming, running, and walking socially distanced anywhere on the Mendocino Coast, or wherever you call home. Visit bigrivertrailathon.square.site for Trail-A-Thon details.

Please check out our website, mendocinotrailstewards.org, and sign our petition in support of the creation of a Redwood Forest Reserve out of the Western third of Jackson Demonstration State Forest. The more names we have in support, the more our legislators will listen.