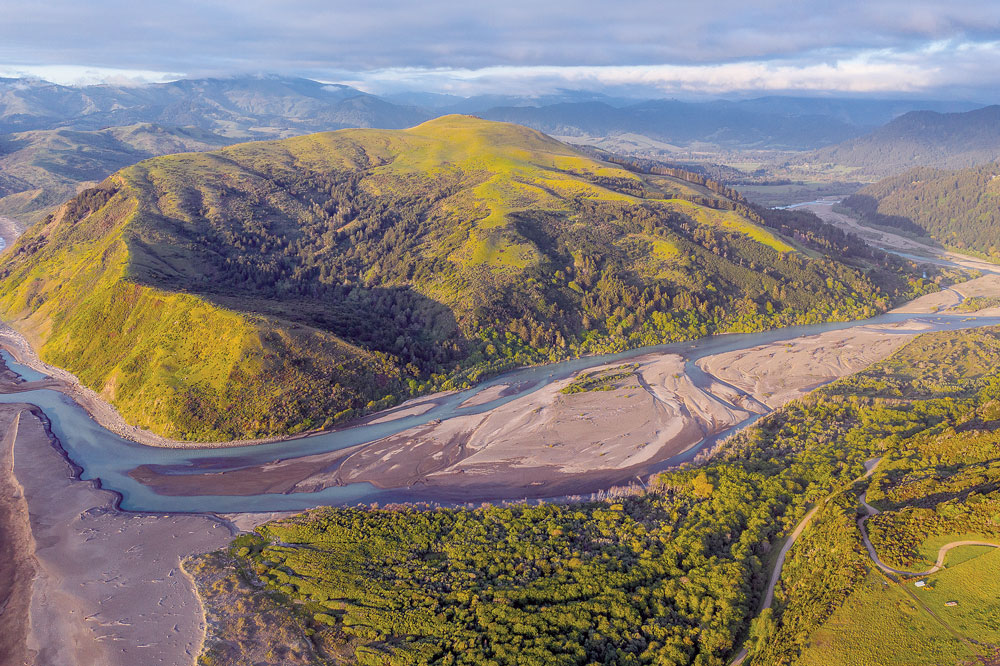 The Mattole Salmon Group (MSG) and the Mattole Restoration Council (MRC) are completing another round of habitat support projects in the vitally important Mattole River Estuary. In summer 2020 these non-profit organizations began work on a second phase of efforts to re-connect historic sloughs to the Estuary and continued work to increase riparian habitat on floodplains through installation of willow baffles and wood structures. This project, to be completed in summer 2021, builds upon efforts initiated by these groups in the early 1990s. These efforts are guided by three planning documents—MRC’s Dynamics of Recovery (1995), MRC’s Lower Mattole River Riparian Restoration Plan (2014), and the U.S. Bureau of Land Management’s (BLM) Lower Mattole River Restoration Projects Environmental Assessments (2013, 2018), which provide direction and environmental review over a 10-year planning period.

The Mattole River Estuary is located about 4 miles west of the town of Petrolia in Southern Humboldt County. The Estuary zone, generally considered the last three miles of the Mattole River before it enters the Pacific Ocean, lies at the bottom of the 304-square-mile Mattole River watershed and feels the effects of flood and drought, farming and logging, and essentially any other impact or disturbance natural and man-made in the river and watershed above it. The Estuary is nearly all within the BLM’s King Range National Conservation Area.

Concerns over the health of the Mattole River Estuary have been well documented and were described in the MRC’s 1995 plan Dynamics of Recovery: “The water is much shallower than it once was, temperatures in summer are elevated beyond what is beneficial for salmonids, and cover and shade are lacking. There are fewer deep pools and less large woody debris providing complex habitat. This degradation makes it impossible for juvenile Chinook to oversummer in the Estuary/lagoon. Yet if they could, they would have a much better chance of returning to their natal streams than [younger] fish which enter the ocean in the spring. Consequently, habitat improvements in the lower river can significantly aid the recovery of now-diminished stocks of Mattole Chinook, in addition to improving conditions for the ecosystem as a whole.” The Estuary is also a rearing location and migratory path for the Mattole River’s other two salmonids: coho salmon and steelhead. All three of these fish species are listed as threatened under the federal Endangered Species Act.

The Estuary is an incredibly dynamic area with massive changes in river location and channel configuration over the past 50 years. The channel can move from one end of the valley floor to the other in a large flood. Flows can range from as low as 30 cubic feet per second (cfs) in the summer and early fall to as high as 30,000 cfs or more in a large winter storm. Dynamics of Recovery describes this area: “Lower reaches of river systems are subject to many powerful forces from upstream, making them inherently variable and dynamic. The river meanders across the valley floor, episodically eroding edges of floodplains, removing the vegetation they once bore and converting them into gravel bars. Elsewhere, cobbles, gravel, sand, and silt are deposited, in time creating new floodplains. The river giveth, and the river taketh away. These forces are daunting in their magnitude and unpredictability.”

The unpredictable and dynamic nature of the Estuary means the longevity of habitat improvements in this area is uncertain. Recent floods have demonstrated that more massive structures and willow and wood structures strategically placed on floodplain sites have a better chance of surviving high water, and that small un-anchored instream wood structures and container plantings on terrace margins are at risk of being swept away when the channel shifts. These observations lead us to humility and discrimination in our planning and implementation of habitat work in the Estuary. Thus, we proceed with caution knowing that whatever we modify or place in this area is subject to the power and unpredictability of the river.

The BLM’s planning documents outlined two primary biological objectives for habitat improvement in the Estuary. The first was to improve juvenile salmonid survival during summer low-flow periods, and the second was to increase availability of suitable winter habitat, with emphasis on juvenile coho salmon winter refuge habitat. To achieve these biological objectives, they identified a suite of physical objectives including:

The prescription for achieving these physical objectives focuses on habitat modifications within four physical features of the Estuary: intermediate-elevation islands, bar apices, terrace margins, and the “middle slough” channel.

Intermediate-elevation islands exist in locations throughout the project reach at an elevation of roughly four to eight feet above the summer low-flow water surface level but below the elevation of the river at flood stage when the bank is full. Many of these islands are transitory features, accreting or eroding as flows fluctuate and the river channel migrates across the valley floor. Thus, the exact locations of islands will likely vary over time. The objective is to increase the stability and durability of these features, promote increased riparian vegetation colonization and growth, and contribute to habitat complexity in the Estuary. Historically, these islands were quasi-stable features in the lower river with thick vegetation. However, the floods of 1955 and 1964 eroded the islands into oblivion and resulted in short-lived islands that are continually reshaped or obliterated during high winter flows. The current islands are partially vegetated with broad patches of fine sediment suitable for plant colonization.

Over the past decade a combination of large wood structures and plantings has been installed on these islands. The large wood structures have been located at the upstream end of the island and along the margins to increase stability and durability of the feature, promote deposition of finer-grained sediment for vegetation colonization, and contribute to instream habitat complexity. Over 20,000 feet of willow baffles interlaced with large sections of wood have been installed on intermediate-elevation islands in the past 10 years, mostly with substantial success.

River bars change with rapid frequency in the Estuary. These features slope gradually from near bankfull elevations to the channel thalweg. They may be in contact with water one year and hundreds of feet away the next. Our experience has shown that creating durable features (wood or wood/rock structures) at the upstream end of the river bars promotes bar stability and increases habitat complexity at low flows. Specific treatments have included bar apex wood jams and vegetated baffles similar to that described above for islands. These apex wood jams have helped to create areas of accretion and island development. In other instances, the new feature has washed away in high winter flows. Another objective of the structure may be to create instream habitat features such as scour and cover around an individual log. In other cases, a combination of larger logs and vegetated baffle installations has been used to create a more persistent topographic feature in the channel.

Alluvial terraces above bankfull stage are a persistent feature in the Estuary, particularly the large terrace along the lower south bank. Vegetation can be lush on these terraces, and gradual river migration can erode margins and allow for beneficial debris to recruit to the wetted channel. However, where channel migration rates are high, margin vegetation does not have time to reach favorable sizes. Also, high-flow channels on terrace surfaces provide access to slower water habitat on the interior of the terrace. Terrace margin treatments have included installation of wood structures in selected locations and large arrays of willow baffles. The MRC has installed more than 1,200 feet of willow baffles at terrace margins in the Estuary. After the first few deposits of fine gravels behind the baffles, we return and plant container stock of black cottonwood, red alder, and Pacific willow.

The Estuary once had an extensive system of slough channels that provided cool, complex habitat connected to the lower river and Estuary. These historic channels suffered a series of setbacks including overwhelming sedimentation as a result of large-scale industrial logging and the 1955 and 1964 floods. On top of this, an earthquake in 1994 increased the surface elevation of the slough and Estuary area by several feet, which left some slough channels too high to serve as summer salmonid rearing habitat.

In 2014, a preliminary slough restoration project excavated and reconnected 250 feet of historic slough. Regular monitoring conducted since that time shows that this is well used by salmon and steelhead, with the slough providing both a physical and thermal refuge. In 2017 an extensive study of the slough networks was finished and resulted in the completion of design documents for an additional 1,200 feet of slough restoration. This design followed the historic slough channel and included plans for littoral shelfs to improve aquatic and riparian plant survival, and installation of wood features for refuge areas. In 2018 construction of the first 500 feet from that designed plan was completed. In 2020 the slough was extended another 700 feet, and large off-channel alcoves were installed along the entire 1,500-foot length of the restored slough channel. In 2020 we were also able to secure over 300 whole trees from MRC grasslands restoration work a short drive away on King Range National Conservation Area lands along Prosper Ridge.

What’s Next in the Estuary and Lower River

BLM, MSG, and MRC continue to gather both physical and biological data in the Estuary and lower river. Observations over the past 10 years include the creation and persistence of pools, the growth and maturity of island and bank vegetation, use of slough habitat by juvenile fish, satisfactory summer water temperatures, and other encouraging developments. Bank erosion still persists in many areas, some of the historic slough channels remain inaccessible in summer, and the area lacks the volume of large woody debris needed to create habitat complexity and fish refuge areas. Thus, our work will continue. We are currently initiating a comprehensive review and assessment of the restoration actions completed to date to guide our next efforts in this area. One new aspect of our planning includes reconnecting the small creeks in this zone to the slough and estuary system. Lower Bear Creek, which once flowed into the system of sloughs on the south side of the Lower River, was diverted upstream approximately 50 years ago. This reduced the freshwater and food supply entering the slough. A planning project currently underway would eventually result in re-routing Lower Bear Creek into its previous channel and provide a new cool water supply to the recently restored slough.

A recent field trip to the Estuary by the authors and others who plan and implement these restoration actions reinforced how our efforts appear fragile in the face of the power and unpredictability of the River. Some of the apex wood structures are high and dry, others are no longer visible, either buried in sediment or washed to the sea. The river eats away at the south bank, and gravel bars come and go. Nonetheless, we will continue our efforts with persistence, humility, and hope.