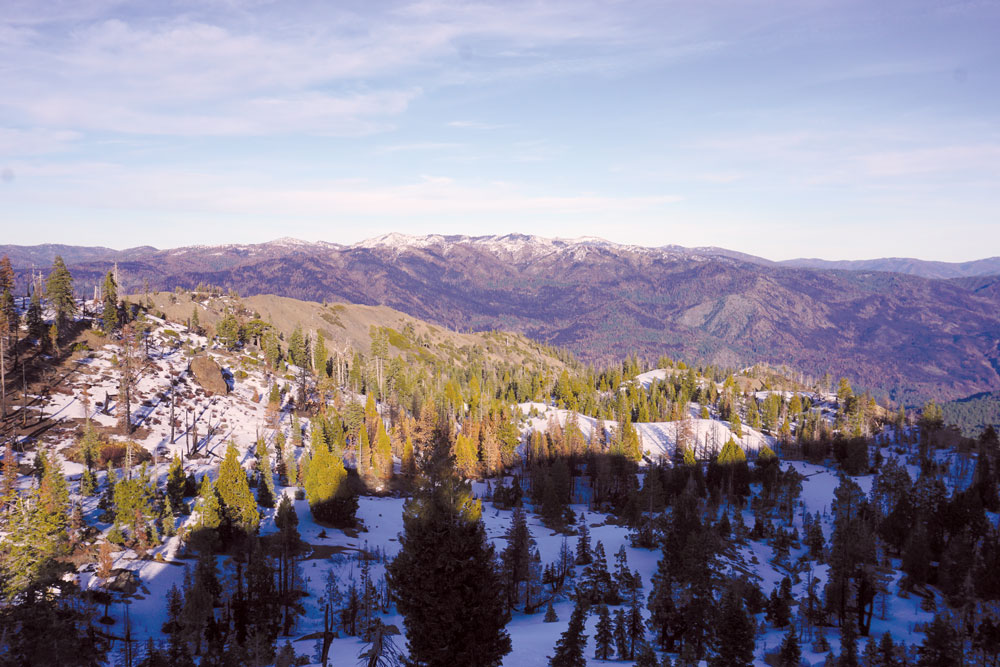 While less than 15% of the Eel River watershed is in federal ownership, public lands are of extraordinary importance with regard to production of clean water and native fishes and maintenance of biodiversity. In the wake of the record-setting one-million-acre August Fire and other recent mega-fires, there is an urgent need for federal agencies such as the U.S. Forest Service and U.S. Bureau of Land Management to be funded at a level where they can be active partners with communities in coping with catastrophic fires and restoring forest health.

The Eel River Recovery Project (ERRP) has taken special interest in the North Fork Eel River watershed because there is no other organized constituency tracking its health or working on its restoration. At 286 square miles, the North Fork is the smallest of Eel River sub-basins, but it is extremely important as refugia for summer and winter steelhead trout.

The basin rises from an elevation of 600 feet at its convergence with the mainstem Eel River to 5,900 feet at its eastern crest, and it historically has had significant snowfall that augmented flows in spring and early summer. Federal lands cover 50% of the watershed, with 9% managed by BLM and 41% within Six Rivers National Forest (SRNF). Four percent falls within the Round Valley Indian Tribes Reservation. While 46% of the basin is in private land ownership, there are only an estimated 200 residents in the watershed, and land use is currently low impact. Most of the river is designated as Wild and Scenic, and the 8,158-acre North Fork Eel Wilderness Area forms part of the headwaters within the SRNF.

A major historical impact was early grazing, as 60,000 sheep were turned loose in the watershed after 1860. Cattle grazing continues today, but at very low levels. Timber harvest on both SRNF and BLM lands was very light, with no harvest before the 1964 flood, and only about 1,200 acres clear-cut during the 1970s. The key problem with watershed management, however, is the cessation of Native American controlled burns that had been used to maintain the landscape in its most productive condition prior to European settlement.

Douglas-firs invaded oak groves, meadows, and springs throughout the watershed. SRNF archaeologist Thomas Keter found that white oak decreased from 36% to 9% as Douglas-fir increased by 80%. Since Douglas-fir use more water in summer than oaks, this has led to decreased summer base flows of the North Fork, including loss of surface flow in dry years. Invasion of grasslands and spring areas by Douglas-fir compounded the problem of decreased base flows. Keter continued to study the North Fork Eel River watershed in retirement, and he documented further deterioration of forest and grassland health at Indian sacred sites at Yellowjacket and Raglin Ridge, including incursion of brush species into meadows between 1980 and 2016. This further reduces surface and groundwater availability and creates additional fuel for fires.

The major source of fuel loading in the watershed, however, results from Douglas-fir over-topping oak groves, causing oak mortality due to shade and competition for moisture. John and Tracy Elgin are of Wailaki and Wintu Indian descent and have an intimate knowledge of the North Fork Eel River watershed, including Native American traditional use of fire and ways that forest and grassland health can be restored. At an October 2017 forest health workshop in Covelo, they warned of a potential conflagration if removal of Douglas-fir and restoration of oaks was not implemented expeditiously. In early September 2020, the North Fork watershed went up like a bomb, fueling the blow-up of the August Fire that then raged into the upper Mad River watershed that supplies water for much of the population of Humboldt County.

This scenario could have been avoided, if SRNF had been given a sufficient budget to implement activities called for in the North Fork Eel River Watershed Analysis (WA), which was conducted in 1995 as required under the Northwest Forest Plan. The WA identified roads as a potential source of sediment and recommended that they be decommissioned or upgraded to stop erosion. It also called for the reintroduction of controlled burns and recognized the benefit of vegetation management in restoring flows. While SRNF improved its road systems and carried out limited forest-thinning projects, the North Fork Eel River watershed did not get the attention and the resources needed to restore forest and grassland health.

The August Fire burned about 70% of the North Fork Eel watershed, including setting back Douglas-fir and reducing areas of overgrown chaparral. Consequently, stream baseflows have increased. In addition, without a forest canopy, snow builds up on the ground instead of being ablated back into the atmosphere when snow is suspended from trees. This can increase infiltration and improve stream base flow.

Unfortunately, gains in flow will not be sustained if forest health is not restored, as the watershed becomes over-grown in the next 40–50 years. This in turn will elevate risk of recurring catastrophic fires that have the potential to alter soil fertility and profoundly decrease forest productivity.

SRNF is responding to the increased erosion risk related to fuel breaks in the North Fork watershed with emergency relief funds this year. These features are limited since the August Fire moved so rapidly through the watershed that CalFire crews could not establish multiple fuel breaks. Ironically, restoration of North Fork Eel River forest and grassland health will receive little attention, since fuel levels are so low and there is little short-term risk of fire recurrence. Also, SRNF has competition for resources in other watersheds like the upper Mad River, and multiple watersheds in the Lower Trinity and Orleans Ranger Districts impacted by the Red Salmon Fire.

To help fill this management void, ERRP began to lay out a plan in late 2020 to bring technical assistance and planning resources funded by grants to assist in crafting forest health and grassland health in the North Fork Eel watershed. The plan envisions contracting with BBW Associates, one of the foremost forest health consulting firms in the region, and also native grass restoration specialists. These contractors would work closely with SRNF staff and the Elgin brothers in order to create a long-term forest and grassland health restoration plan that is science-based and integrates traditional ecological knowledge. Benefits would include reduced catastrophic fire risk, improved ecosystem resilience, increased biodiversity, and restoration of watershed hydrology. Long-term plans include empowerment of the Round Valley Indian Tribes (RVIT) to become active co-managers in the North Fork Eel River watershed, supplying a work force to steward the land going forward for seven generations. ERRP is currently engaged in education programs to recruit Native American youth to become forest health scientists and practitioners, so that they can provide the RVIT with
co-management capacity.

ERRP has worked extensively with SRNF staff, including at the Mad River Ranger District, which supervises the North Fork Eel River watershed. We approached Ranger Kristen Lark about forging a partnership and bringing in large-scale grant funds for forest and grassland restoration planning. Sources of funds include CalFire and Wildlife Conservation Board Climate Change Initiative (CCI) grants and the National Fish and Wildlife Foundation. In early January 2021, we requested that SRNF consider entering into a Participating Agreement with ERRP to create a North Fork Eel basin forest and grassland health restoration plan. If it was approved in the next few months, CCI grant applications could be filed in 2021, and assessment and planning could start in 2022. Unfortunately, SRNF declined the partnership request because their staff resources are so limited that they couldn’t even administer grants if we won them.

The staff at the Supervisor’s Office in Eureka and at the Mad River Ranger District level is equivalent to a skeleton crew and can’t keep up with the demand and need following up on the 2020 fire season. The framework is in place, SRNF policies and plans are consistent with ERRP objectives, but they need more staff. There is a similar desperate need at the Mendocino National Forest, where the extent of the August Fire was even greater. Arcata BLM also needs full funding to carry out its mission of supporting restoration and recreation.

Citizens of the North Coast need to organize and urge Congressman Jared Huffman to lead a campaign to restore full funding for the USFS and BLM. What is at stake is not only our forests, but also our water supply and biodiversity reserves.