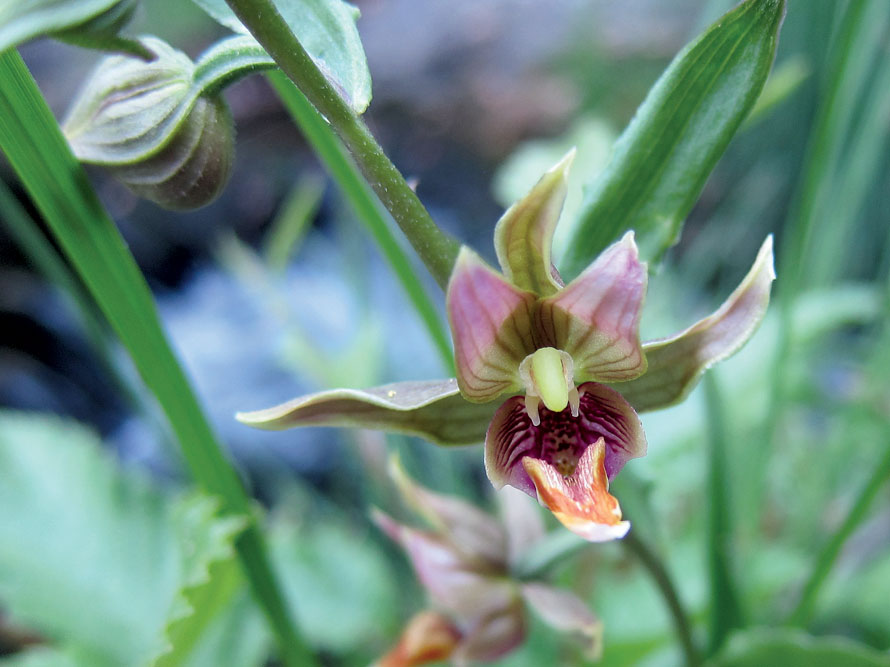 At first it is easy for stream orchid flowers to go unnoticed. From a distance, the flowers appear brownish green, but up close one is treated to a rainbow of colors! Once you notice one, all the flowers around you will pop into view.

Ranging from British Columbia south to Mexico and east to Texas, stream orchids like it moist, preferring to grow in seeps, wet meadows, swamps, and streams. On the Mattole River of Northern California, they grow in crevices on rocks right in the middle of the river, withstanding torrents of rushing water during rainstorms and being submerged all winter long. Once the water subsides, the plants emerge from underground rhizomes, growing erect and reaching from one to three feet tall. Flowers appear in late June and last well into summer. The flowers are pollinated by flower flies, also known as syrphid flies, or hoverflies. After pollination, elongated seed pods form, which open when ripe to release thousands of tiny seeds. The plants also multiply by their rhizomes and can form dense colonies. When the weather cools in fall, the leaves turn yellow then the plants die back completely and are dormant in winter.

As the common name suggests, stream orchids are in the orchid family, which is one of the largest flowering plant families on Earth. Of the 18 native species of orchids growing in California, stream orchid is the largest, hence its species name, gigantea. The name of the genus, Epipactus, derives from Greek and Latin, epi meaning “upon” and pact meaning “made fast,” presumably describing how the rhizomes hold fast onto rocks and other surfaces where the plants grow.

Stream orchid makes a good garden plant for moist, shady areas and does well in containers. Check your local native plant nursery to see if they carry it.

Stream orchid has a look-alike—broadleaved helleborine, Epipactus helleborine, which is native to Europe but common here and can become an invasive pest in woodland gardens.