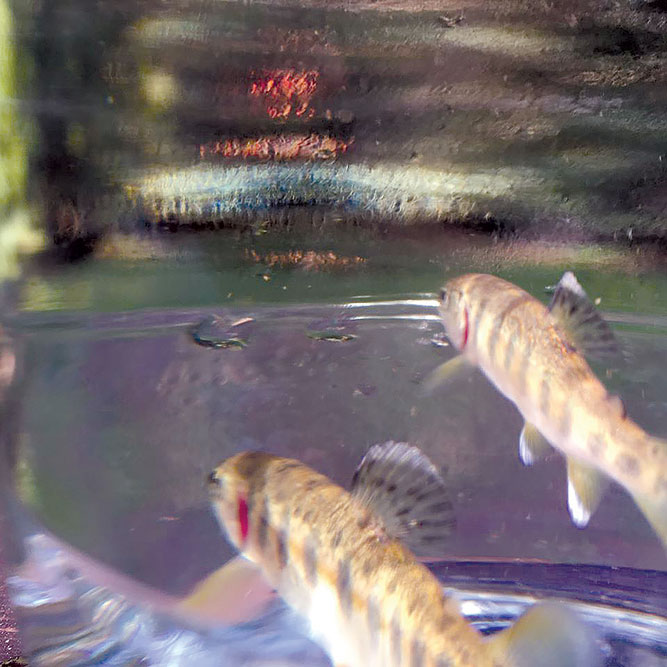 After installing a fyke net trap on San Geronimo Creek—the largest free-flowing tributary to Lagunitas Creek—and monitoring coho migration for seven weeks in mid-April, the Salmon Protection And Watershed Network, or SPAWN, captured a total of 2,732 healthy coho smolts that were then released back downstream to continue their journey out to the ocean. This is among the largest numbers of coho smolts that SPAWN has recorded emigrating downstream originating in San Geronimo Creek.

“The numbers we’ve seen this season are very exciting for our endangered coho salmon, but it does not mean we can relax in our efforts to protect them,” said Ayano Hayes, SPAWN’s watershed biologist.

This large smolt class was the offspring of the adult spawners of 2018–2019, when an above-average spawning cohort made their way up San Geronimo Creek to spawn. When coho salmon are born in freshwater creeks, they spend 12–15 months growing and preparing for their adult phase in the ocean, where they will spend another 1.5 years before returning to the freshwater world where they were born to lay their eggs. The process, known as “smoltification,” prepares salmon for saltwater intake and the ocean environment—the fish change physiologically and morphologically, internally and externally.

SPAWN timed the installation of the trap following the lunar cycle, ensuring the trap was in the creek on the darkest night of the month due to a theory that fish will take advantage of the dark night as they move downstream, in order to swim unseen by any predators. Coincidentally, in the days following the new moon, SPAWN observers saw large numbers of fish migrating, a noticeable difference from only days before. On the contrary, as the full moon approached, SPAWN recorded dwindling counts of fish migrating. This apparent connection to the lunar cycle is an interesting aspect of the coho smolt life-history.

This large number of coho smolts makes clear that the habitat in and along San Geronimo Creek must be protected and restored in order to safeguard this rare, wild coho salmon population. To ensure that large groups of coho salmon smolts continue to survive and rear in Marin County, maintaining creekside riparian habitat is paramount. That is why, in addition to monitoring coho salmon populations, SPAWN is actively fighting for a creekside development ordinance in Marin County that will help stop damaging development that eliminates creekside riparian habitat. In a watershed that has suffered a lot of damage, San Geronimo Creek must be better protected in the future.