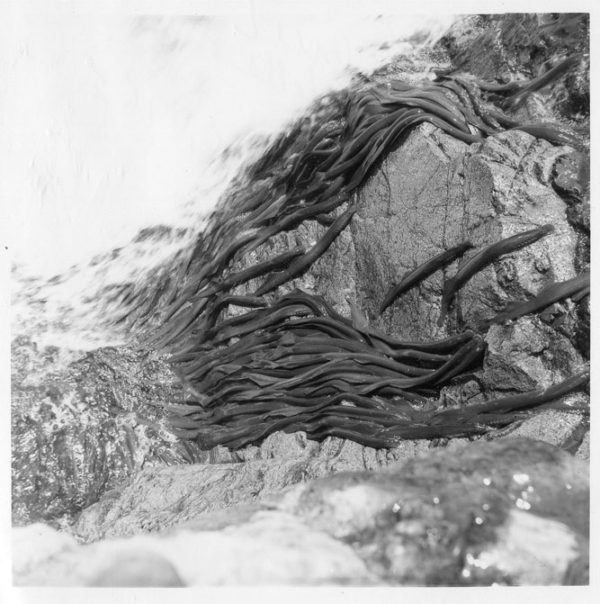 On a typical summer weekend in the late 1990s, you might have found me amid other teenagers, all lounging in the sun a few miles up the road from my house at one of our favorite swimming holes. At this place, the cool waters of Hayfork Creek tumble through a series of man-made pockets in the rock—perfect for fish to make their way up the steep stretch, and equally lovely for the kids of rural Trinity County to squander a hot afternoon. For me, that place feels frozen in time: even when I go there now, it feels like I’m stepping over the same old poison oak branches, slipping on the same loose dirt, seeking shade under the same gray pines.

But the fish ladder, as we in Hayfork call it, became a lot more interesting about six months ago, when I attended a presentation by my good friend, Damon Goodman. A fisheries biologist here on California’s North Coast, Damon is one of the lead researchers on Pacific lamprey
—a mysterious, misunderstood, and often maligned fish. In that presentation, Damon showed a set of photos from 1963, taken—to my surprise!—at my very own Hayfork Creek swimming hole, only there were no teenagers, and there was no fish ladder; the photos appeared to show a mere waterfall with fast-flowing water, but when you zoomed in, you could see dozens—or maybe hundreds—of Pacific lamprey, all using their suction-based mouths to dyno-climb up the steep falls.

In 1963, and probably for millennia before that, lamprey were the only anadromous fish making their way above those falls. In Hayfork Creek and across California in rivers that lack man-made obstacles, Pacific Lamprey can make it farther upstream than even the most athletic anadromous salmonid. As a result, they are often the only marine-derived source of nutrients in the entire upper watersheds of those places. On Hayfork Creek, the falls were later dynamited and the fish ladder was installed, providing a route for steelhead to leap their way into the upper watershed but at the same time severely restricting passage for lamprey, who lack the ability to jump. There, as in many places across the Pacific West, the passage needs of lamprey—wetted climbing routes unobstructed by sharp angles—were overlooked in the effort to save the more glamorous, jumping salmonids. With each dam and fish ladder that went up, the lamprey lost another point of connection, another watershed. As a result, Pacific lamprey are currently missing across more than half of their historical distribution in California.

Turns out the structures that were engineered for one set of fish did not do justice to the other.

If you know me, you know I have an intense interest in barriers to prescribed fire. Eleven years ago, I focused my graduate research on that topic, publishing the first paper that ever quantified and described prescribed fire impediments across federal, state, and private burners in California.

But if you really know me, you know that I am frustrated with the incessant focus on prescribed-fire barriers. What seemed fresh and interesting and provocative a decade ago seems stale and tired now—and almost self-fulfilling in some way. After a decade of collectively defining and explaining the barriers, they’ve become our bedfellows. Liability, air quality, funding, burn windows, public opinion—they slip off our tongues with such ease, such comfort. We’re not accomplishing much more burning now than we were ten years ago, but we’ve gotten much better at talking about why we’re not doing it.

A deeper dive into some of those impediments may show that it’s our perception of them, rather than the reality of them, that is holding us back. For example, in a new paper by Miller et al. on prescribed fire barriers in California, they explain that “all interview groups stated that liability laws place financial and legal responsibility for any escapes on the burner, creating a risk-averse culture” in the state. A closer look at California’s liability laws reveals that this is not true; California is a simple negligence state, where private burners must be proven negligent to be held liable, and federal and state burners enjoy even more robust immunity than their private counterparts. However, these misperceptions are pervasive, even at the highest levels; just last year, a national report by the Coalition of Prescribed Fire Councils erroneously identified California as a strict liability state, based on a survey response from a misinformed CAL FIRE official. The same kinds of misperceptions are common around public opinion, air quality, and burn windows.

One of my regrets from my graduate work is that I didn’t find a good way to capture the personal bias—or passion—of my respondents. I haven’t seen this meaningfully covered in any of the more recent studies, either. However, from my work on prescribed fire in the last decade, I can tell you that personality, perspective, and culture easily top the list of prescribed-fire barriers—from the practitioner on the ground all the way up to our state and federal leaders. It may be that we need psychologists in addition to social scientists to truly grasp the complexity of this field.

On the lamprey front, things have greatly improved in recent years. Ten years ago, the lamprey was underappreciated and underserved, with decimated populations and severely restricted habitat. But times are changing. Damon and his colleagues have discovered that lampreys will eagerly use alternative structures if they’re made available, and something as simple as a properly angled PVC pipe can open up entire riverine networks that have for decades been inaccessible to lamprey. Thanks to their innovative efforts, Pacific lamprey are coming back to places where they haven’t been seen in ages, even as far south as San Luis Obispo and San Diego in southern California. And the reestablishment of the lamprey provides a cascade of benefits for the entire system, including for the rivers and streams that flourish with their added nutrients, and for the Native and other local communities who depend on them for food.

If you ask Damon, it was not further study of the fish ladder or the dam that opened these doors; rather, it was a fresh focus on lampreys themselves—understanding how they move and what they need, and paying close attention to where and how they are still functioning.

It’s time to freshen up the prescribed-fire conversation. Let’s stop dwelling on the barriers—we know them. We’ve all hit those walls and felt that pain. Let’s study and dwell instead on the people and places where prescribed fire is working—where the collective language and culture centers on the art and passion around fire rather than on the fear of fire. I want to learn more from those places—and not just about their cooperative agreements and their programmatic compliance work. I want to learn about their personal philosophies and attitudes, which I guarantee are at the core of their success. Can you name a heavy-hitting prescribed-fire program that doesn’t have a visionary, energetic, or uniquely effective person at its helm? Neither can I.

We’ve seen in the last decade that when it comes to prescribed fire, we can’t quite make the jump we need—but it could be that we’re just focused on the wrong structures. Maybe a shift in focus a change in attitude and conviction
is the PVC pipeline we need for a better prescribed-fire future.

Trees Foundation Board Member Lenya Quinn-Davidson is an Area Fire Advisor with University of California Cooperative Extension, in Eureka and the Director of the Northern California Prescribed Fire Council. She works on a wide range of issues, including research, outreach, and policy related to prescribed fire and fire management more generally. Feel free to contact her at [email protected].