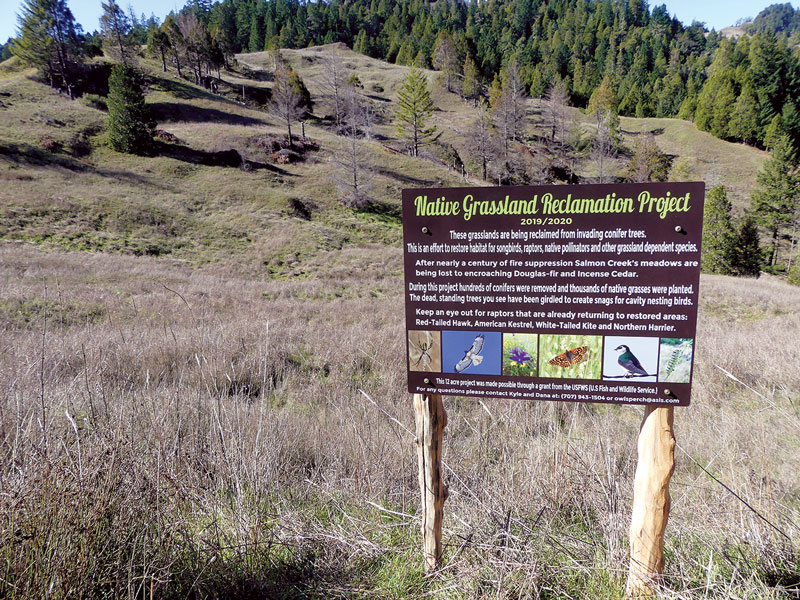 Over a two-year period, two $10,000 U.S. Fish & Wildlife Service grants were awarded to the Fool’s Farm in the Salmon Creek watershed, tributary of the South Fork Eel, to carry out local grassland reclamation. The project’s focus was to remove encroaching conifers on approximately 10 acres of historic grasslands. The primary objective was to reclaim native prairie that still had high floristic diversity, while enhancing habitat for grassland-dependent species.

The site is from 1,300’ to 1,700’ in elevation; N/NE slope, earth flow (slow-moving slide) with some ultramafic (serpentine) influence on the soils. The area has intact colonies of native perennial bunch grasses, as well as high wildflower diversity where the conifers did not fully take over.

Historical evidence indicates that the prairie was used for sheep grazing several decades ago. As a child, I visited the area (35+ years ago) and remember observing Western Meadowlarks, as well as White-tailed Kites, Red-tailed Hawks, and American Kestrels hunting on the south end of the project boundary. I have strong childhood memories of watching these birds of prey hover above the ridgeline. I also remember an abundance of wildflowers. The largest encroaching conifers were mostly knee to chest high then.

Aerial photos from 1942 show the project area completely clear of conifers except for one small grove of Incense Cedars that were established on a rocky knoll. (The presence of cedars is due to serpentine soils.) Those trees are estimated to be 100+ years old and have no fire scars. To our knowledge, after interviewing old-time ranchers and fourth-generation residents, and looking at historic fire map records, no fires have burned in this area for at least 70–90 years.

The average age of the larger trees we removed was approximately 25 years. The oldest tree cut down was a 38-year-old cedar.

The project was accomplished utilizing one lead sawyer, one sawyer/swamper, and two swampers. We formed a local crew (my wife and I, along with friends and neighbors) to do the job. We wanted to further our place-based skills in grassland restoration, while keeping good notes on various techniques we were implementing.

Prior to the project commencing we informed neighbors via a community Facebook bulletin board and phone calls, as well as installing an informational sign on the road near the site.

Note: A pair of American Kestrels began using the newly opened habitat only five days after conifer removal. They were seen hunting in the area for months after the project was completed. (American Kestrel populations have declined by 50% in North America since the late 1960s.1)

Wildlife piles: Eight large wildlife piles were constructed. We used felled logs and poles from the project to build simple structures (dens) that were then covered with large amounts of brush.

Pile Burning = Snowing Potash: Burning large piles of brush may have value in dispersing potash (nutrients/minerals) over grassland systems that have experienced a fire deficit for several decades. Falling ash was found up to 1/4 mile from the epicenter of the project site, and the areas adjacent to our project were all dusted with potash. This raised the question: Could the long-term benefits of boosting plant growth and vitality in perennial grassland systems via nutrient dispersal (snowing potash) possibly offset the carbon loss from burning large piles of brush?

Tree girdling using the “triple ring” method: Trees that were not felled were girdled and left standing to provide habitat for cavity-nesting birds. All trees were girdled using a “triple ring” method that we have developed over the past five years. If done correctly it has a 95–100% success rate with killing Douglas-fir. Most trees take at least a year to die.

Three rings are made with a chainsaw penetrating the bark and cambium layer (approximately 1/2” to 1 1/2”-deep cuts, depending on the thickness of bark) around the circumference of the tree. Cuts (rings) are made from 6” to 1’ apart. Two rings can be effective on drier sites. It is very important to make sure that each ring penetrates the cambium layer (into the wood) the entire circumference of the tree in order to prevent any sap from flowing up the tree. The process takes 2-6 minutes per tree, depending on the steepness of the slope, the diameter of the tree, and experience of the chainsaw operator. This was the first time that we used this method to kill cedar trees. They have been slower to die than Douglas-fir.

Conifer encroachment, wind dynamics, and raptors: As mentioned earlier, I have strong memories as a child of watching birds of prey using wind currents to hunt (hover or kite) over the southern dividing ridgeline of this project. At that time there were no trees larger than six feet tall in the vicinity. The last time that we witnessed raptors hunting in this manner was almost 20 years ago when we first moved to this property.

After removing many of the trees (now 20–40’ tall) from the ridgeline, we saw the first raptor (American Kestrel) utilizing wind currents to hunt there once again. It revealed a potential impact of conifer encroachment on grassland ridges that we were unaware of—the roughening/dampening of wind velocities by conifers can alter the wind dynamics needed for birds of prey to hunt efficiently.

Stumps, acorn-caching Scrub Jays, and oak regeneration: Our direct observations and the documentation of others have shown that successful oak regeneration can be attributed to acorns being cached (buried) by Scrub Jays.4 (Steller’s Jays and Gray Squirrels also cache acorns.) We have observed jays using rocks, logs, bushes, fences, etc., as visual markers to remember where they hid their acorns. Many of the conifers we removed had Tan Oak, Canyon Live Oak, and Oregon White Oak seedlings under them, confirming this observation. With this in mind, we intentionally left stumps, logs, and piles of wood in areas where Scrub Jay-planted oaks might fare well in the future.

Is conifer encroachment possibly playing a part in oak regeneration?: The observation of jay-planted oak seedlings growing under encroaching conifers brought up another question about a possible pathway for regeneration and establishment of oak woodlands: Could conifer encroachment set up the conditions for acorns to be cached by Scrub Jays that use the invading trees as markers, to later then be followed by fire which kills the young conifers
but allows for the young oaks to basal sprout and establish new territories? (Of course, fire suppression would not facilitate this process.)

Reclaiming “conifer balds”: Encroaching conifers can create bald areas where no grass or flowers are growing. Many of these areas can accumulate duff and mycelial mats that are 2–4” thick. These areas need to be raked or burned to remove conifer duff to expose bare soil for planting seeds. It quickly became apparent that raking was a foolish endeavor given the scale of this project.

We have observed that if conifers are removed and no action is taken to establish natives, the bare areas are mostly colonized by exotic grasses and thistles, even if native species already exist nearby. We believe that this is due to annual grasses producing seed faster than the nearby native perennials and/or that exotics may be present in the existing soil seed bank. These observations tell us that “grassland restoration” requires more than just removing the conifers.

An experimental approach to dealing with conifer balds and seeding: In the areas where we had burn piles in the conifer balds, the duff layer was consumed enough to expose the underlying soil and our direct seeding success was high. Learning from this, we decided to experiment with some of our 2019/20 plots by creating dense lop-and-scatter piles over areas where conifers had killed the grasses. We will let these brush piles cure for a season and then conduct small broadcast burns during the fall/winter months in hopes of burning off the duff layer left by the conifers. Seeds will
then be sown directly in the burned areas in hopes of re-establishing native grassland species.

A well-timed and planned treatment of prescribed (Rx) fire would be the most efficient means of reclaiming these conifer-encroached “dead zones.” But in situations where land owners are facing challenges from adjacent neighbors, or do not have an ideal location for using Rx fire, the method described above could be an alternative option.

Live bunchgrass plug planting: We planted a total of 1,850 live plugs over the two-year period. Three species were planted: Festuca californica, Festuca idahoensis, and Deschampsia cespitosa. The live plugs were mostly planted in conifer balds and burn-pile scars. Plugs were planted 1.5’ to 3’ feet apart. Some grass and flower seeds were also spread in these areas. The survival rate was very high (98%) for the 2018/19 season.

Canola oil as chainsaw bar oil: In the last two weeks of the project we experimented with using canola oil as a chain lubricant after doing some prior research on its use in European countries. So far it has worked perfectly and if bought in bulk costs less than standard bar oil. (It also costs way less than commercial eco-bar oil.) This may be good news for future restoration projects in our region given the potential impacts of petroleum-based bar oils on amphibians, terrestrial forest snails, soil organisms, aquatic life, etc.

A project this scale needs to be maintained with fire: There is no way we would take on a project of this scale again in the same area 20 years from now. The amount of embodied energy (fossil fuel), human calories, time, and money it took to do what fire could have done in a matter of minutes has us thinking that we must use prescribed fire to maintain these reclaimed meadows in the future.

We are currently in the process of consulting with local prescribed fire advocates and practitioners to help make this dream a reality. We have tentative plans to conduct our first 5-acre prescribed fire treatment during the fall of 2020.

Fire is not currently being used as a land-restoration tool in the Salmon Creek watershed. As public education and awareness of Rx fire increase, surrounding neighbors may become more supportive of this practice. In the meantime we will continue to gain knowledge and direct experience with Rx fire. This is where our Humboldt County Prescribed Burn Association comes in. And yes, we are members!

← Eel River Fall Chinook 2019–2020 Run Declines Due to Variable Ocean ConditionsPODs: A Solution to Fire in the Time of Climate Change →