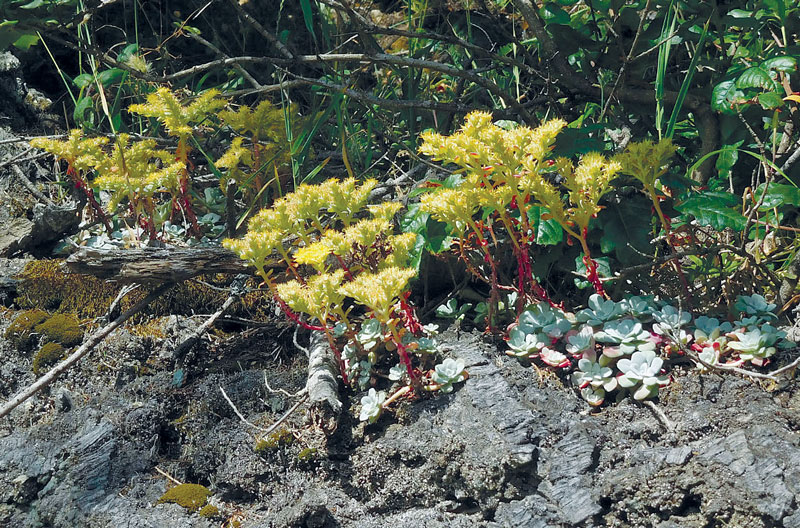 Did you know that there are many succulents native to California? My favorite is broadleaved stonecrop, a lovely little plant with rosettes of gray-green, waxy leaves that become tinged with red due to stress, such as from drought or freezing weather. Like many succulents, broadleaved stonecrop roots easily from its stems, spreading to form low mats of foliage about four inches high and up to two feet wide. Sprays of bright yellow flowers appear in spring, rising four to six inches above the plant. In the wild, broadleaved stonecrop prefers to grow on coastal bluffs, riverbanks, and rocky outcrops, where it forms hanging mats of foliage. Seeking moisture with its roots in winter, it survives our dry summers by retaining water in its fleshy stems and leaves. The grayish waxy coating of the leaves reflects sunlight and is another mechanism for the plant to survive dry summers.

Broadleaved stonecrop is pollinated by bumblebees and other native bees, who use the flowers for nectar and pollen. Larvae of two butterfly species use the leaves and flower buds for food: Moss’ Elfin, Callophrys/Incisalia mossii, is fairly common and never far from sedum; Rocky Mountain parnassian, Parnassius smintheus, is only found on sedum at high elevations. In addition to being beneficial to insects, the plant has human uses, including treatment of sore gums, constipation, and nerves.

In the garden, broadleaved stonecrop is a nice, neat, small-scale groundcover for sun or shade, requiring little or no summer water. It looks just as fabulous spilling over the side of a flowerpot as it does on a rocky outcrop! Unfortunately, native succulents can be at risk from poachers who denude whole embankments of the plants and send them to markets overseas. Rather than collect in the wild, it is best to purchase plants from nurseries or get cuttings from a friend.

Ranging from British Columbia to Southern California, broadleaved stonecrop is most abundant in Northern California’s Coast Ranges and the western Sierra Nevada. The scientific name is Sedum spathulifolium and it is in the plant family Crassulaceae, which also contains jade plant, hens and chicks, and many other well-known, garden-variety succulents. The species name, spathulifolium, refers to the spoon or spatulate shape of the leaves, spatil being Greek for spoon and folium being Latin for leaves.

Cheryl Lisin is a native plant enthusiast, landscape designer, and President of Friends of the Lost Coast (formerly Lost Coast Interpretive Association) whose mission is to inspire passion for nature in the Lost Coast Region. She is currently working on a native plant garden at the King Range BLM office for the education and enjoyment of all. You can contact her at [email protected]. Special thanks to Pete Haggard for the information on insects!