Diggin’ In: The Richard Gienger Report 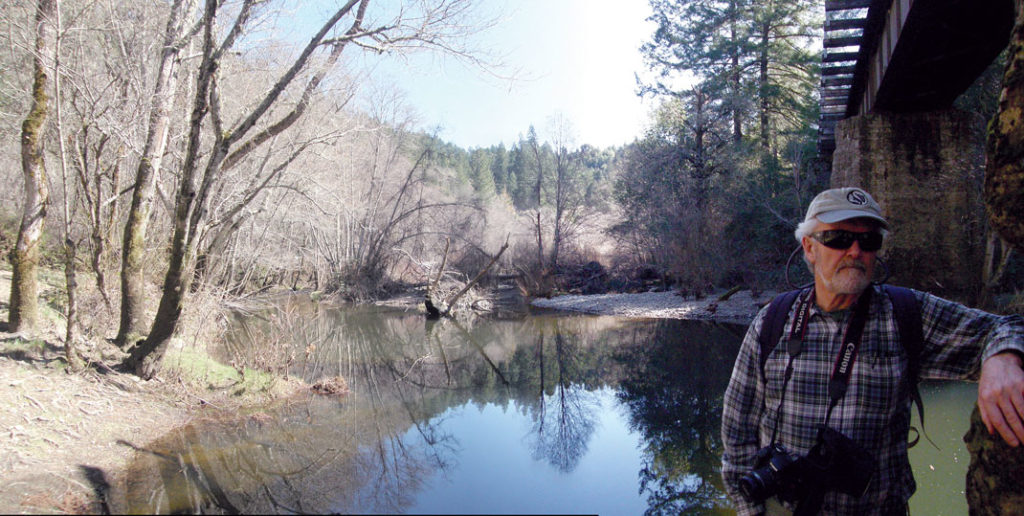 Sure gets tough making sense of so much all at once and over lifetimes. Right now we are in the beginning throes of dealing with a virus that already is affecting millions around the world with not just threat of sickness or death but the disruption of multiple layers, numbers, and types of relationships and supply chains that humankind depends on. This context is daunting for moving forward on “Diggin’ In” #63.

Aside from this immediate emergency, each of us has experiences both directly and indirectly via what we incorporate through observation and learning from an incredible array of verbal, written, and sound stimuli, and visual history and art. My particular “tilt” has been strongly affected by forest, water, and soil connections and learning some of the positive and negative human relationships to those connections spatially and over time.

To simplify three categories or modes of relationships I have observed, experienced, or learned about: moving seasonally over the landscape to meet needs and inspiration; staying mostly in one locale to develop and literally cultivate what is needed; and utilizing technological skills that are valued and rewarded. Of course, there is a heterogeneous and variable blending of these modes—with often-contentious conflicts within and amongst human groups with ranges of aspirations and conditions.

There is a huge body of historical documentation, much of which is widely available—and much of which competes for our attention every day—that presents explanations and perspectives going “way back,” but for the sake of this discussion, let’s just focus on the last 500 years (more or less) and the ventures and migrations to empower and enrich various types of imperial interests, capabilities, and cultures with the resources and cultures of the Western Hemisphere. This dynamic is more widely expressed over the rest of the world and over a much larger period of time. Among literary explanations for the last 500 years in the Western Hemisphere is the book Guns, Germs, and Steel by Jared Diamond. Another perspective is described in 500 Years of Indigenous Resistance by Gord Hill.

I recommend as required reading Mark Arax’s article about the Camp Fire and Paradise (https://story.californiasunday.com/gone-paradise-fire) and Mark Arax’s latest book, The Dreamt Land,
www.latimes.com/books/la-ca-jc-review-mark-arax-dreamt-land-water-california-20190530-story.html. To get down to a regional Southwestern United States-heavy history and complex overlays that more broadly apply, I recommend: The Three-Cornered War—The Union, the Confederacy, and Native Peoples in the Fight for the West by Megan Kate Nelson.

Now I need to take a few over-simplified jumps to get us to conditions in what Dwight Yoakum refers to as “The Late Great Golden State”—a catchy song accessible on YouTube. I can’t begin to address all the nuances and un-nuanced progression of the colonial and plantation-oriented dominant paradigms sweeping West from colonies to revolution to civil war to world stage imperialism inconsistent with democracy and on to World Wars I & II and repeating boom & bust cycles. There are some positive and inspiring aspects along the way, and maybe even hope for the future, but the reality situation examined at a variety of scales, with the regions of California as case studies, is massive depletion of resources, burgeoning populations, no real conservation ethic, and a devil-take-the-hindmost economy based on real estate and other speculation and exploitation. Now I don’t want to offend the Ayn Rand “Fountainhead” powerbrokers that control so much these days, but a re-thinking and re-acting for difficult and positive courses is necessary. Ironically, in some ways, responding to the coronavirus pandemic points the way to making changes that seriously slow down the runaway fossil fuel juggernaut economy: stay home and get self/group-sufficient.

OK, I’ll calm down and describe some specific examples that stand out for me. The big deal professed these days—now from almost all quarters—is achieving the “triple bottom line” or the three “E”s: Economy, Environment, and Equity. Our regional reality sure went heavy on the economic, sacrificing environment and social equity. Conquest and displacement, overgrazing, overfishing, over-logging and related impacts continued from 1850 right on up to today. There has been very little “middle ground,” and the pressure to move to the music of economic necessity as dictated by those who gained control of most of the land has been overwhelming. There has been some resistance, with conservation and protection achieved from time to time in large areas of the Klamath and Trinity, some coastal areas like the King Range and Sinkyone Wilderness, and other areas like the Heath and Marjorie Angelo Coast Range Reserve in the headwaters of the South Fork Eel River.

Growing up in places like upstate New York, lake country in Ontario, Canada, forested mining lands in Pennsylvania, and Virginia piedmont farmland gave me plenty of opportunity to observe adversely altered landscapes and some “passive recovery” when human pressures left or slackened. Moving in 1971 to the Mattole River headwaters and adjacent to the coast and South Fork Eel River watersheds, I and many others traversed a lot of forestlands that had been incredibly and grossly impacted from the tractor logging primarily in the 1950s and ’60s and even extending into the 1980s. This was huge motivation for protection of original forest remnants, and restoration/recovery of the region’s forests and watersheds.

In the late 1960s, Redwood National Park was established, followed by the heated struggle over its essential expansion in the early 1970s and amalgamation with earlier California State Redwood Parks. Public awareness and outrage over extreme impacts by logging exacerbated by the 1955 and 1964 “100-year” floods led to a whole era of forestry
reform, including stronger regulation, required oversight by professional foresters, and multidisciplinary planning and monitoring.

Continuing this thumbnail sketch: A stage characterized by more public involvement and the importance of social mores developed in the late 1970s and on through the 1980s to the present. Protection of the Sinkyone Wilderness coast and Headwaters Forest are two notable examples. A major element was the acquisition of depleted forestlands by non-profit conservation organizations such as the The Conservation Fund and the Redwood Forest Foundation, Inc.

Getting myself too deep into an introduction for a book—I’ll present some short notes now:

Please check out my comments and editorial about Rainbow Ridge in the Winter 2019 Forest and River News. Seeing how Humboldt Redwood Company keeps saying “Come See for Yourself,” a bunch of us did—mostly from the Mattole Restoration Council, together with some others including Paul Hughes from Forests Forever, two HRC foresters, and me. Big issues, folks—and thank goodness the discovery of a spotted owl occurred during the logging operation, and what was an area that should have been designated High Conservation Value Forest ended up with obliterated “cut marks” and now we have a Northern Spotted Owl grove. Virgin ungullied prairies were gouged with a haul road leading to steep forest and inner gorges.

Meanwhile, Pacific Forest Trust is looking for another conservation-minded 501(c)3 nonprofit to take over ownership and stewardship of 540 acres along Outlet Creek, a tributary to the Eel River that gives access for salmon and steelhead, notably Coho traveling to Little Lake Valley and the Willits area spawning and rearing tributaries.

The fight continues by Why Forests Matter and Forests Forever to get adequate standards and incentives for truly healthy and high-quality forests of multigenerational nature—not just forests thinned for five years.

That’s it, folks, food for thought. Please help out where and when you can. Check out the workshop & tour programs and other information for Sanctuary Forest, ISF, and EPIC.

Since arriving in the Mattole Valley of Humboldt County in 1971, Richard Gienger has immersed himself in homesteading, forest activism, and watershed restoration. Richard’s column covers a range of issues including fisheries and watershed restoration and forestry, plus describes opportunities for the public to make positive contributions in the administrative and legislative arenas as well as in their own backyards.