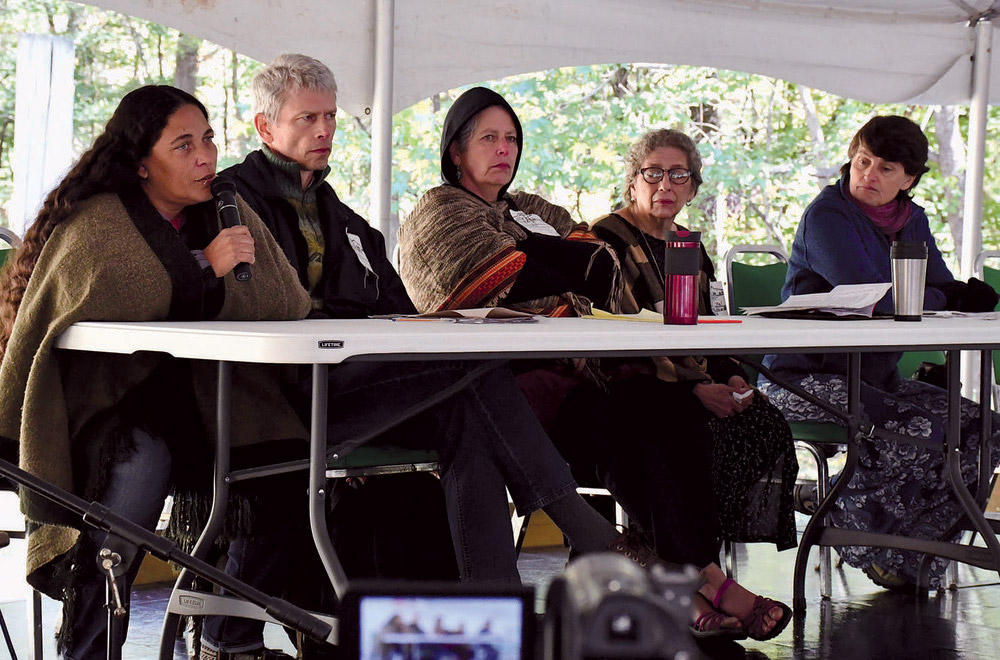 In the summer Forest and River News, we announced the October 2019 Resurgence: the North American Forest and Climate Movement Convergence, planned for mid-October. We recently returned, and it proved to be a momentous event.

The Convergence took place October 11 – 14, and converge they did—from Indigenous territories in British Columbia, South Dakota, the Four Corners Area; from the L’eau Est La Vie camp and campaign on the Gulf Coast; from forest and climate grassroots groups in Montana, Pennsylvania, Vermont, Oregon, New York, Ohio, and many other places; activists from the Dakota Access Pipeline campaign; students from So. Illinois University; Indigenous youth, and many more. There were a couple of us representing the campaign to protect Mattole forests on our north coast, and other Californians.

We were 250 – 300 strong in the beautifully diverse deciduous forest in the Shawnee National Forest of southern Illinois. Youth, Indigenous, forest, and climate activists got together to strategize and plan: to move forward with a deeply strategic, radical and action-centered agenda. The talking was non-stop and the pundit egos were absent as grassroots activists filled sheaves of flip charts, paid homage to the full moon and worked incredibly hard. We also danced to the hip hop music of MOVE’s Mike Africa Jr. and the political songs of David Rovics. The 4-day convergence had few breaks, and lots of passion, knowledge, experience and enthusiasm. Shawnee elder Barney Bush welcomed us all to the convergence, and early discussions took a hard look at the intersections of forest destruction, climate chaos, and race, gender and class injustice, as we explored root cause remedies and strategies. Deep thinkers, movers, and shakers populated the panels with a healthy range in age, geography and cultural diversity. The panels and speakers early on laid the foundation for the rest of the gathering. Unlike most conferences, this event was not full of “expert” talking heads speaking at the front of a room full of squirming people in chairs. The bulk of the time, energy and focus was given over to the “Strategic Action Sessions,” in-depth strategy discussions, participants sticking with their topic throughout the convergence

By and large, the event brought together deep thinkers ready to challenge the status quo, the power structure, and each other. We weren’t there to talk about how bad things are or debate whether we’ve arrived at the tipping point. We came to wrestle radical solutions to the ground while looking at the networks needed to move forward collaboratively.

The themes for the Strategic discussions were

• Greenwash Capitalism schemes like commodification of forests and other natural resources and the carbon market;

• Building Youth Movements How we build real solutions like ending use of fossil fuels, establish legal rights of nature, and ensure forest and Indigenous Peoples’ rights of free, prior and informed consent.

Not easy topics, but it’s time to face these issues head on, and think outside the proverbial box. The Convergence is not an end unto itself—it is the beginning.

With that in mind, I was part of a Strategic Action group that discussed organizing a western regional convergence in early spring, possibly as part of an international day of action against monoculture and plantation forestry. Groups in the west are primed to follow up, particularly in light of the deficit of activists from the west in So. Illinois. Please contact the Bay Area Coalition for Headwaters (BACH) (see below) if you are interested. Many more stories and action plans are coming out of this event. To view videos from the Convergence (strategic discussions were not recorded) see: the Convergence Facebook page (facebook. com/pg/nafcmc) or Convergence vimeo (https://vimeo.com/365925474).