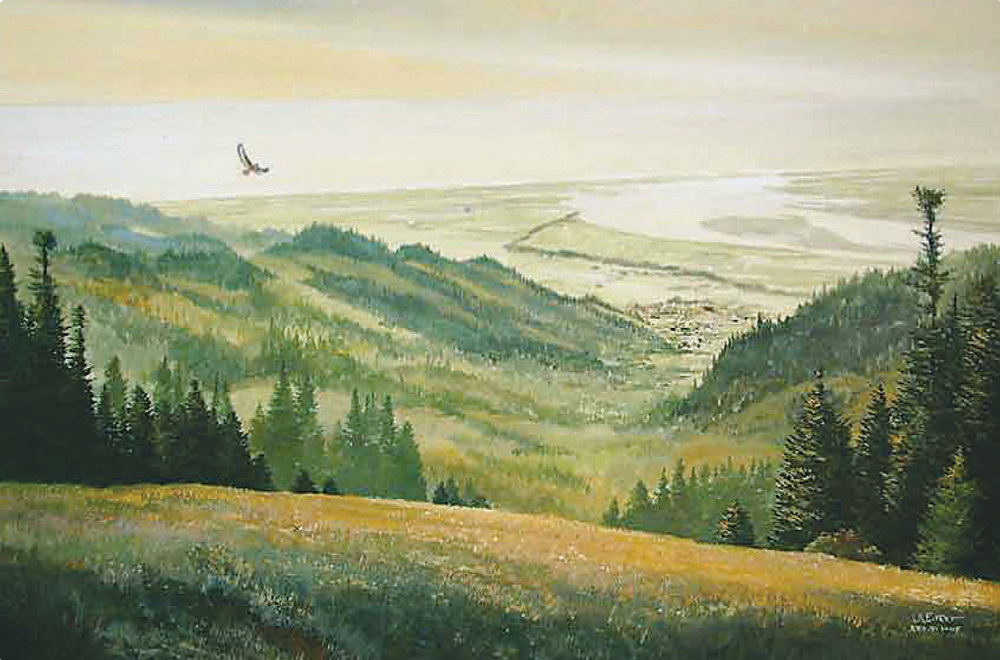 by Salmon Forever
Terra-Gen’s Humboldt Wind Energy Project proposal for Monument and Bear River Ridges is tearing our community apart and pitting environmentalists against one another. Yet the misguided proposal is also fostering a community appalled by the cultural, ecological, and financial havoc that would inevitably result from this industrial wind factory.

At the birth of international climate accords in Rio in 1992, nations all agreed “not to carry out any activities on the lands of indigenous peoples that would cause environmental deg radat ion or t hat wou ld be culturally inappropriate.”

Yet Humboldt County is welcoming Terra-Gen to construct a massive industrial complex on the unique prairie grasslands of ridges managed and held sacred by the Wiyot people for countless generations. The Wiyot Tribe opposes this sacrilegious project.

Permitting the wind factory would not provide electrical power during public safety power shutdowns, but it would open the door to other colonizing multinational corporations to exploit Bear River Ridge, a Wiyot high prayer area that the Redwood Coast Energy Authority (RCEA) has identified as the most commercially viable wind site in the County. The industrialized wind power factory also serves as a gateway to piecemealing the industrialization of other ridges further south.

The Wiyot have alerted us to the distinctive habitat at risk (see the article by Wiyot biologist Adam Canter in the May 16, 2019 edition of the Lost Coast Outpost, and “The Terra-Gen Wind Project: Feeding to the centralized and fire-prone PG&E Grid,” on the Wiyot website www.wiyot.us) including over 80 different vegetation communities, 50 percent of which are rare or sensitive. More than 100 plant and animal species important to the Wiyot Tribe would be impacted. (TerraGen has mapped 83 drainages in the project area, including 16 perennial waterways.) Many are listed as critical habitat under the Endangered Species Act and support species such as Chinook salmon, summer and winter steelhead, marbled murrelet, northern spotted owl, snowy plover, and yellowbilled cuckoo, to name just a few.

These Cape Mendocino grasslands encompass one of the largest expanses of increasingly rare coastal prairies. Situated at 3,100 feet elevation at the crossroads of terrestrial and aerial migratory pathways, the area is a flyway connecting the Pacific Ocean and the Eel River. One hundred fifty affected species are listed in the project’s Draft Environmental Impact Report (DEIR), all struggling to recover from the last 150 years of intensive logging, habitat fragmentation and overgrazing to grow their populations from severely depleted gene pools.

This ecosystem that Terra-Gen will obliterate has no parallel anywhere on the planet. These vast and beautiful pacific coast ridges ripple out between stream-forged valleys, surrounded by mixed forests dotted with residual old growth. The ridges and their Standing With the Wiyot The High Ecological Toll of a Wind Factory on Bear River and Monument Ridges Old-growth forest dependent marbled murrelet adult incubating an egg. photo f rom media-cache-ak0.pinimg.com Bear River Ridge art by L a r ry Eif ert Page 4 Forest & River News a Winter 2019 winds connect the ocean to the Eel River. It is no wonder that the Wiyot recognize this area as a high prayer place. (For drone views of Bear River Ridges, see https://www.youtube.com/ watch?v=CPoXGzuQv8I)

Destroying it with a wind factory would only perpetuate nearly two centuries of destruction that these people, and their lands, have endured.

The animals and flora of these ridges have adapted unique behaviors in tune with the winds, which is why a unique population of hoary bats that winters here is so special, and so vulnerable. The bats but represent a much broader ecological universe. Here, terrestrial, aerial, and migratory pathways connect Humboldt Redwoods State Park, Headwaters Forest and surrounding “lesser cathedrals” of old-growth redwood, Grizzy Creek State Park, Pamplin Grove and Gilham Butte, and other rich and diverse habitat islands to the Eel River and the Ocean. This is a living, fragile ecosystem, at the heart of which we find Monument and Bear River Ridges.

T he ic on ic m a r ble d murrele t population is on an extinction trajectory, having lost 85 percent of its inland nesting habitat, resulting in a 90 percent reduction in their population. Our local population of approximately 2,000 birds will be forever threatened by as many as 60 wind turbines up to 600 feet into their aerial flyways, where breeders fly up to eight times daily into old growth islands. Neither they nor their habitat have ever encountered such forbidding machinery, which, combined with climate change, could bring the species to extinction. Oregon’s uplisting the marbled murrelet last year to endangered is being challenged in court, as murrelets flee from Oregon and Washington due to increasing loss of inland habitat from logging and wildfires.

“Of the 114 Pacific Northwest bird species analyzed, the marbled murrelet had the highest climate-sensitivity score”, states the Oregon Department of Fish and Wildlife’s January 2018 Status Review of the marbled murrelet. Terra-Gen’s so-called mitigation for killing murrelets is to cover garbage cans in Van Duzen and Cheatham County Park: a symbol if not symptom of the subterfuge that constitutes the basis—and most of the content—of the Environmental Impact Reports.

This project is a poster child for cumulative impacts. Advocates like to minimize the impacts of the proposed project by suggesting that the landscape is already “managed,” therefore this project is just another use. But the landscape is managed in part by public trust agencies that regulate the forestry and grazing activities in order to sustain ecological functions, for the public benefit. It is because they are so heavily managed that they cannot tolerate further insult, especially one so unimaginably large and impactful as an industrial wind factory.

Jonathan Franzen says it best in his March 2015 New Yorker essay, “Carbon Capture”: “Carbon emissions have rendered meaningless the ideal of a wilderness untouched by man; the new Researchers at Imperial College London, Edinburgh University and SP Technical Research Institute of Sweden report that while an average of 11.7 turbine fires are reported annually, more than 117 fires actually occur worldwide. At present there are an estimated 200,000 turbines in operation around the world. This equates to a 1 in 1709 chance of a turbine catching fire in a year. Terra-Gen proposes 60 turbines, which equates to a 1 in 28.5 chance that there will be a fire during the project’s lifetime. ideal is “wildness,” which is measured not by isolation from disturbance but by the diversity of organisms that can complete their life cycles.”

Advocates of this project insist that we must do our part to alleviate the climate emergency, that climate change will kill millions of critters. But this project is not “doing our part.” It only adds to, rather than ameliorates, the impacts of climate change by front-loading at least five years of carbon emissions in the construction, transport and installation of the turbines, and by perpetuating an annual loss of vegetative and soil carbon sequestration. Under this project the biodiversity of this ecosystem will be fragmented and forever degraded, depriving whatever the future climate may bring of having any influence over ex t i r pated species t hat m ig ht otherwise evolve accordingly.

Terra-Gen would wreak general havoc over a wide range, as each turbine blade sweeps an aerial surface of 4.5 acres at tip speeds of 200 mph, creating massive turbulence while warming and drying vegetation for as far as 15-20 kilometers downwind.

In the 2018 research paper “Climatic Impacts of Wind Power,” published in the research journal Joule, David Keith writes “The direct climate impacts of wind power are instant, while the benefits accumulate slowly…if your perspective is the next 10 years, wind power actually has—in some respects— more climate impact than coal or gas.”

Add in 25 miles of new high voltage transmission lines surrounded by vegetation and the fire danger alone should halt this project.

But of course there is much more to rue, including 17 miles of new roads, some over 220 feet wide (freeway lanes are 12 feet wide), through the highly erodible Franciscan soils of Jordan Creek, more than 11,000 cubic yards of concreted ridges, 3 million cubic feet of soil disruption, and the 25 miles of transmission lines to Bridgeville, which will bleed sediment into the Eel River forever, further threatening aquatic species on the brink of extinction. We have already lost 30 percent of birds worldwide over the last 30 years. Placing giant wind blenders in their pathways is the worst thing we can do.

“To prevent extinctions in the future, it’s not enough to curb our carbon emissions. We also have to keep a whole lot of wild birds alive right now. We need to combat the extinctions that are threatened in the present, work to reduce the many hazards that are decimating North American bird and wildlife populations, and invest in large-scale, intelligently conceived conservation efforts, particularly those designed to allow for climate change,” wrote Jonathan Franzen in his March 2015 New Yorker essay, “Carbon Capture.”

Our environmental community’s response to the Terra-Gen project has been influenced by the perception that it will be approved no matter what. This has led some groups to create a coalition letter* that supports a “mitigated” wind factory, thereby assuring the County and wildlife agencies that they will not challenge the project. Not all members of these organizations agreed with the preposterous notion of mitigating the effects of this gargantuan project, but few expect Terra-Gen to agree to their demands. Many are quite upset by it, and by their organizations’ ignoring the opposition of the Wiyots and other Tribes, the towns of Scotia and Rio Dell, and many residents in the Eel