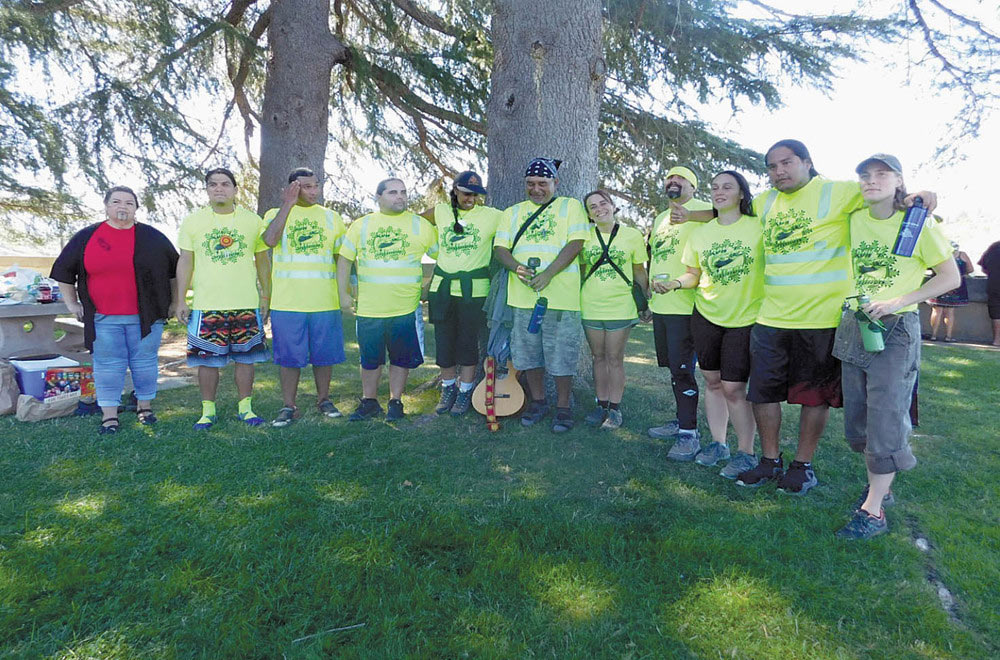 By Dan Bacher and Regina Chichizola

As Governor Gavin Newsom was getting ready to veto a bill that would protect California salmon from Trump administration attacks, runners from the Run4Salmon on the Sacramento River watersheds and runners from the Klamath and Trinity rivers joined together on September 25 to run on the first-ever Trinity Connection Run for the Winnemem Wintu Tribe’s Run4Salmon.

“This run was a statement on bringing the salmon people together and on bringing the salmon back to where they need to be,” stated Yurok Tribal member Richard Myers. “We ran from one nation to the other, as salmon are a common denominator for Indian people. It needs to be recognized that we are connected through the waters of life, which provide for the people. This run was a way of doing this.”

Members of four local Sacramento, Klamath, McCloud, and Trinity River Tribes ran in the Trinity Connection. The Trinity River is the largest tributary to the Klamath River and over 50% of it is diverted to the Sacramento River to irrigate corporate mega-farms growing almonds, pistachios and other export crops on drainage-impaired land on the west side of the San Joaquin Valley.

Over 80% of the river was diverted until a major agreement to restore the river — the Trinity River Record of Decision (ROD) — was made between the Hoopa Valley Tribe and Department of the Interior. This occurred right before the Klamath River fish kill in September 2002, when over 38,000 salmon died from disease spurred by low, warm water conditions. Trinity River releases beyond this agreement are now used to avert Klamath River fish kills in low water years.

“Physically connecting to the lands that the creator bestowed to my people by foot on routes we have traveled for trade and communication for centuries was an honorable experience I’ll never forget,” stated Thomas Joseph, a Hoopa Valley Tribal member and representative for California Kitchen, a sponsor of the run. “Through using these traditional methods to bring awareness of our community struggles to other communities we can find the strength and healing to combat the chaos of today’s challenges be it environmental or social struggles. We need to look back at traditional practices for our answers.”

Trinity Connection Runners ran by three dams and four reservoirs on their 50-mile run. They said that the run “helps bring attention to the fact that the majority of the Central Valley’s water supply comes from the areas within their run.” However, local Tribes and rural people that are suffering from lack of salmon are rarely consulted in water decisions, they said.

Instead, major irrigators, such as the Westlands Water District that is hundreds of miles away, controls the north states Conservation Partner Organizations at Work Thomas Joseph and Jese Naomi run over the Shasta reservoir. p hoto by Regina C h ich izol a Page 38 Forest & River News a Winter 2019 water. They pointed to the fact that Westlands’ lawyer and lobbyist David Bernhardt is now running the very agency that controls decisions that impact California’s water decisions and Tribes. Bernhardt has been accused of numerous ethics violations since taking office.

In a op-ed in the Sacramento Bee on September 20, Chief Sisk strongly urged Governor Gavin Newsom to sign Senate Bill 1, legislation that would provide new tools to resist the rollback on the Endangered Species Act protections for salmon and BayDelta fish populations that the Trump Administration is planning to release soon.

Unfortunately, Newsom vetoed SB 1 on Friday, September 27, saying he disagreed with SB 1 proponents “about the efficacy and necessity of Senate Bill 1.” Newsom’s veto of SB 1 is no surprise, considering that the total contributions from the agricultural industry in his 2018 campaign for Governor were $637,398.

Save California Salmon is very disappointed in the governor’s lack of a backbone when it comes to fighting the Trump administration’s environmental rollbacks. Newsom has once again favored corporate agriculture interests over Californians that rely on healthy fisheries, clean drinking water and labor protections. It is particularly disappointing he vetoed this bill on California Native American Day just days after being asked by Tribes to sign SB1. We urge the governor to change course when it comes to water